WARNING: J. Hershy Worch is a potential DANGER to All Women and Children living in Tzfat, Israel

WARNING:  J. Hershy Worch is a potential DANGER to All Women and Children living in Tzfat, Israel

The following message was forwarded to The Awareness Center by a reliable source:


To convey a group of five girls to and from their home in Ibikur/Canaan to school in Me'or Chayim. 20 times per month.

For over twenty years there have been numerous allegations made against Rabbi J. Hershy Worch involving clergy sexual abuse .  The post from the Tzfat emailer suggests that he has contact with groups of girls and is looking to bring them to a school in which he is connected.


Jeremy Hershy Worch was born in Manchester, England, on May 20, 1954. He received his smicha (rabbinic ordination) from Rabbi Shlomo Carlebach in 1992.

The  first arose against Rabbi Worch occurred during the years in which he was living in Australia.  A book was written about his alleged predatorial several years ago regarding his behavior at Hamakom Synagogue in Melbourne, Australia, titled "The Torn Messiah".

Over the years Rabbi Worch has been accused of utilizing a mixture of kabbalah, hypno-eroticism and other manipulative techniques to enagage his potential victims prior to sexually assaulting them. 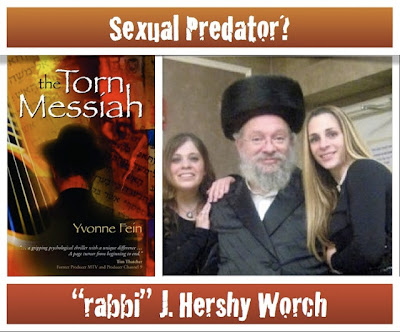 Rabbi Worch has allegedly written a "BDSM-Kabbalah" and finds his "students" over the internet, primarily through his Livejournal "Kabbalah_101" community.

Please help The Awareness Center warn the Tzfat community of how dangerous he allegedly has been in the past.