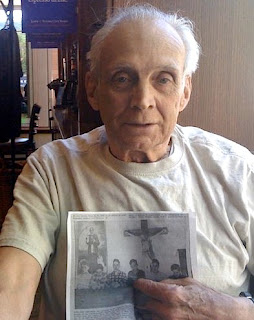 Back in 1992, at the age of 55, Rick Springer joined forces with LinkUp, (which was originally called VOCAL - an acronym for Victims of Clergy Abuse Linkup) started speaking out as a Catholic survivors of clergy sexual abuse.

According to the  Chicago Tribune article "Silence is Broken", Rick Springer was quoted as stating:  "I knew that what he (his offender) was doing was wrong". . . "But I couldn't tell my family, which was alcoholic dysfunctional. I told leaders of my church, who said the archbishop of Chicago would be informed.  At the time Springer was studying to become a priest.  "But nothing happened. I was told to leave the seminary because I was not a good candidate for priesthood. That's the way it stayed for 31 years."

Since 1992, Rick has become a strong activist for hundreds of other adults survivors of sex crimes, and has been co-leading a self-help group with the Chicago based group called LinkUp ever since.

Rick is a HERO! He has crossed the battle fields hundreds of time to pick up wounded survivors and get them help. HERO is a small word compared to the HUGE IMPACT he has had on awareness, healing and recovery from sexual abuse. Bob Schwiderski

tina Johnson
Rick Springer is an outstanding human.
He as been a wonderful friend and excellent advocate for priest abuse victims..
He also gave much time and energy to help me with SB217 a Hawaii bill to remove the Statute of limitations child sex abuse and 2 year window.. I'll never forget his support and help.. (the bill passed unanimously to the governor to sign (he vetoed it and went with the catholic church who fought against it.).. Rick was supportive every step of the way..
thank you Rick... tina