The Death of Sadie Dellon 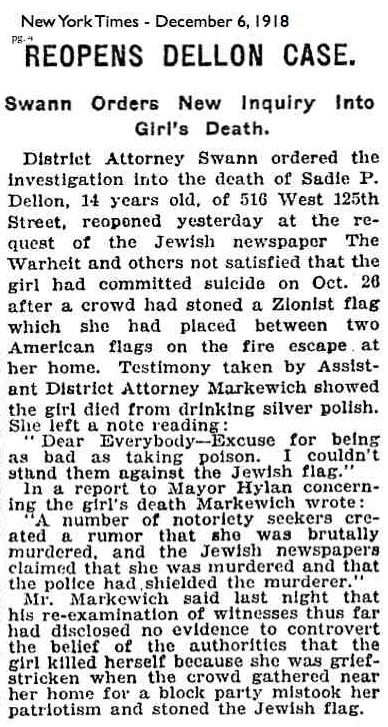 By Nadine Bonner
Domestic Abuse ranks far from the top of the Jewish communal agenda.

Few task forces look into the problem and not many rabbis address it from the pulpit, according to Marc Cwik, a graduate student at the University of Wisconsin-Madison.

But Cwik's recently completed Master's Thesis, "Peace at Home? The Response of Rabbis to Wife Abuse within American Jewish Congregations," documents that wife abuse occurs across the Jewish spectrum and that rabbis are confronting the problem, even if they aren't speaking about it publicly.
"There are a tremendous number of women going to their rabbis" for guidance after suffering spousal abuse, said Cwik in a telephone interview.

The study was designed to measure rabbinic attitudes, not instances of abuse. It was restricted to dealing with physical abuse and only to the wife.

During the first year of the two-year project, Cwik said, "all I heard was that no one would respond and that the Jewish community was in denial."

The results, he reported, "shattered a lot of myths."

Cwik received a 72 percent response to surveys he sent to 203 rabbis across the country. He obtained a list of U.S. congregational rabbis from E. Chernofsky's 1991 edition of "Traveling Jewish in America." The names were chosen randomly. Cwik cannot definitely account for the unusually high response rate, but he said that the initial telephone call to each rabbi established a personal connection and may be a reason so many applied.

The requests and responses were fairly evenly divided among Orthodox, Conservative and Reform rabbis, he said. For the study, he restricted himself to dealing with those three main denominations.
In addition, 30 rabbis contacted Cwik via the Internet and asked to participate. Cwik sent them all questionnaires, though only eight met the criteria of the study.

Cwik described the results as "very positive." He said "there was no denial." The rabbis all acknowledged that wife abuse exists in their communities. He said that the rabbis collectively had seen 403 abused women over a five-year period.

Unlike their Christian counterparts, most of the rabbis reported that they would instruct an abused women to call the police or an attorney. In general, rabbis, even Orthodox rabbis, did not tell battered wives to change their behavior or to trust in G-d and pray as methods of stopping abuse.

Although the rabbis did not always see divorce as a solution, they said they do not hesitate to recommend separating from an abusive husband.

Paradoxically, Cwik said, rabbis from all the denominations said they should intervene to stop abuse, but only the Orthodox rabbis said that they would seek out the abusive husband and confront him.
Cwik postulated in the study that the reason may be that Conservative and Reform rabbis prefer to refer the abused wives to mental health professionals, while the Orthodox rabbis prefer to provide counseling themselves.

Another paradox, Cwik noted, was that although the rabbis said they would like more materials on the topic of domestic abuse, few actually sent away for the "Rabbi Kit" on the subject prepared by Jewish Women International (formerly B'nai Brith Women).

Cwik's study also demonstrates that wife abuse is not a new phenomenon.

He includes several 13th century responsa (interpretations of Jewish law) by Rabbi Meir ben Baruch of Rothenberg (Germany). Rabbi Meir once was asked what to do about a wife-beating man whose aunt lives in his household, annoying the wife and contributing to the tension between the couple.

"Therefore [he] must force his aunt to leave his house and must promise to treat his wife honorably. If he persists in striking her, he should be excommunicated, lashed and suffer the severest punishments . . . If his wife is willing to accept a divorce, he must divorce her and pay her the ketubah [marriage contract]."

Cwik points out that because Judaism acknowledges divorce, the rabbi's attitudes are not as stringent as those of some Christian clergy, who include "until death do us part" in their marriage ritual.

Cwik said that he is planning to write a book this summer, using material from his thesis and combining it with other pieces he has published. The book will include pieces he has written about the agunah problem - women who are trapped in marriages because their spouse will not give them a get, a bill of divorce required by Jewish law.

Then, he will be "taking a break from graduate school" by entering the University of Wisconsin Law School in the fall.
The Milwaukee native, 24, said he pursued a Master's Degree in Child and Family Studies as a prelude to his real goal - a career in Family Law.
A graduate of Hillel Academy and Homestead High School, his parents are Dr. Arnold and Shelly Cwik of Mequon.