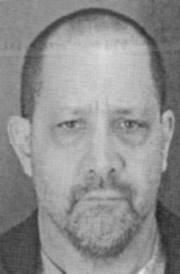 Convicted with sexually abusing a teenage boy over the course of a year, at times in a synagogue.

If you have more information about this case, please forward it to The Awareness Center

Authorities arrested a Brooklyn man yesterday and charged him with sexually abusing a teenage boy over the course of a year, at times in a synagogue.

Robert Feivish, 35, of 976 E. 9th St., a security guard, was charged with seven counts of sodomy, 10 counts of sexual abuse and five counts of endangering the welfare of a child. Incidents date back to 1992, said Sgt. Arthur Peaslee of the Public Morals Division.

The suspect was arrested after a psychologist who was treating the youth reported the alleged incidents, police said.

Earliest Release Date: 03/28/2007
Under certain circumstances, an inmate may be released prior to serving his or her minimum term and before the earliest release date shown for the inmate. See "Help" for further information.

Robert Feivish, an inmate in custody of the New York State Department of Correctional Services, Respondent. for Civil Management Pursuant to Article 10 of the Mental Hygiene Law.


Respondent, Robert Feivish, has brought this motion seeking dismissal of the petition in this proceeding commenced by the State of New York under Article 10 of the Mental Hygiene Law. Petitioner has submitted papers in opposition to the respondent's motion.

The State of New York commenced this proceeding seeking various relief including a judgment determining that the respondent is a sex offender requiring civil management under Article 10 of the Mental Hygiene Law. The petition alleges that the respondent is a detained sex offender, in that he stands convicted of a sex offense as defined in MHL Sec. 10.03 (p), and is currently serving his sentence in a DOCS facility for the commission of that offense.

The record reflects, and it appears to be undisputed, that on February 2, 1995, the respondent was sentenced in Supreme Court, Kings County, for convictions on two (2) counts of Sodomy in the Second Degree, to two (2) indeterminate sentences of 2 to 6 years, with such sentences to run consecutively. The respondent's maximum expiration date following the Kings County sentencing was calculated to be February 16, 2006. Thereafter, on November 27, 2001, the respondent was sentenced in County Court, Erie County, for a conviction for Attempted Promoting Prison Contraband in the First Degree, to an indeterminate sentence of 1 ½ to 3 years, with such sentence to run consecutively to any present sentence pursuant to Penal Law 70.25 (2-a).

Respondent does not claim that his underlying sentences were improper. However, given the above mentioned sentences, the respondent now argues that he is not included within the designation of a "Detained sex offender" as defined in MHL Sec. 10.03 (g) and, as a result, the petition herein should be dismissed because Article 10 of the Mental Hygiene Law does not apply to him. Respondent contends that the maximum sentence on the Kings County convictions for the sex offenses expired on February 16, 2006, and that he was serving a sentence for only one conviction after February 16, 2006, that being Attempted Promoting Prison Contraband in the First Degree. Respondent asserts that he was not serving a sentence for a qualifying sex offense on April 13, 2007, when Article 10 of the Mental Hygiene Law became effective, or in February of 2009, when this proceeding was commenced. [*2]

The petitioner, State of New York, argues that, due to the requirements of Penal Law Sec. 70.30 (1), the respondent was still serving his sentence on the sex offense convictions from Kings County when the provisions of Article 10 were enacted and when this proceeding was commenced and asserts that the respondent's motion to dismiss the petition should be denied. The State cites People v. Buss, 11 NY3d 553 in support of its position. The petitioner also argues that, under the definition of "Detained sex offender" as set forth in MHL Sec. 10.03 (g) (1), the sentence that the respondent was serving when Article 10 became effective and/or when this proceeding was commenced was for a designated sex offense identified in Article 10 or for a related offense. The definition of "Related offenses" as set forth in MHL Sec. 10.30 (l) includes those offenses which are "the bases of the orders of commitment received by the department of correctional services in connection with the inmate's current term of imprisonment." The State contends that the definition of "Related offenses" clearly encompasses the sentencing circumstances set forth herein.

Upon review and consideration of the papers submitted, the Court has determined that respondent's motion seeking dismissal of the petition should be denied.

Although the Court of Appeals in People v. Buss analyzed and addressed the effect of the provisions of Penal Law 70.30 within the context of the Sex Offender Registration Act (SORA) and did not address the effect of Penal Law Sec. 70.30 beyond SORA, this Court finds that application of PL Sec. 70.30 to a proceeding under Article 10 of the Mental Hygiene Law is a sufficiently similar context such that the Court of Appeals ruling in People v. Buss is controlling in this instance. (see, People v. McFadden, Supreme Court, Monroe County, Justice T. Van Strydonck presiding, where the Court reached the same conclusion in an unreported bench decision that was placed on the record on February 6, 2009). Under the provisions of PL Sec. 70.30, the respondent's sentences for Sodomy in the Second Degree and his sentence for Attempted Promoting Prison Contraband in the First Degree were "made into one" and the respondent was subject to all of the consecutive sentences that made up the merged or aggregate sentence he was serving. People v. Buss, supra at page 557. (see also, People v. Merejildo, 45 AD3d 429; People v. Curley, 285 AD2d 274; People v. Serrano, 2001 WL 1682751, 2001 NY Slip Op. 40509[U]). Further, this Court finds that the goal or purpose of Article 10 of the Mental Hygiene Law is similar to the goal of SORA, to "protect the public from the danger of recidivism posed by sex offenders" (People v. Stevens, 91 NY2d 270.275) and the Court is not persuaded that a different application of PL 70.30 with respect to MHL Article 10 is warranted. (see, MHL Sec. 10.01 (a) Legislative findings).

Moreover, regardless of the application of the provisions of PL Sec. 70.30 to a proceeding under MHL Article 10, the Court finds that the respondent herein still qualifies as a "Detained sex offender" under Article 10 because he stood convicted of Sodomy 2nd Degree (PL 130.45), a "Sex offence" as defined in the statute (MHL Sec. 10.03 [p]), and was currently serving a sentence for a "Related offense" since his conviction for Attempted Promoting Prison Contraband in the First Degree in 2001 was the bases for one the orders of commitment received by DOCS in connection with the respondent's then current term of incarceration. (see, MHL [*3]10.03 [g] [1]).

Lastly, the Court has reviewed the cases of Matter of State of New York v. Randy M., 57 AD3d 1157; People ex rel. Joseph II, 59 AD3d 921 and People ex rel. Knox, - - N.E.2d - -; 2009 WL 382546, cited by the respondent. The Court finds these cases to be factually distinguishable from the case at bar and the Court is not persuaded that they require dismissal of the petition herein. Further, the respondent is not claiming any violation of his constitutional rights through his motion and the Court notes that various provisions of Article 10 have been constructed to address certain due process issues.

This shall constitute the Decision and Order of the Court. No costs are awarded on the motion.

Robert Feivish, 54, of St. Lawrence Psychiatric Center, 1 Chimney Drive, was issued an appearance ticket for second-degree harassment after he and another patient fought at 11:38 a.m. Friday. 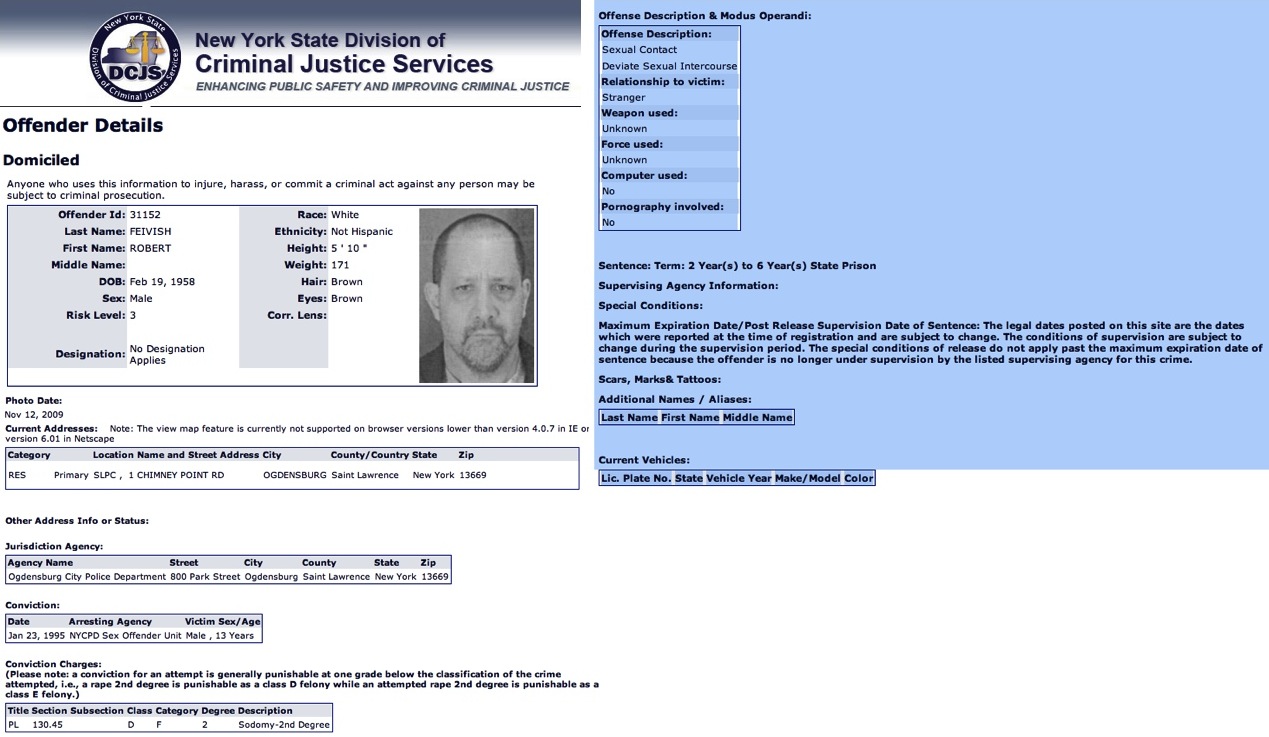 "Never doubt that a small group of thoughtful, committed citizens can change the world. Indeed, it is the only thing that ever has."
--Margaret Mead