Honoring the National Clearinghouse on Marital and Date Rape

Honoring the National Clearinghouse on Marital and Date Rape

Even though the National Clearinghouse on Marital and Date Rape closed its doors back in 2005, it was a historically important group when it came to creating or changing laws in hopes of keeping women and children safer and for there to be prosecution agains sexual predators.  If it wasn't for people like Laura X or those who worked with her, none of us would be doing what we are today. 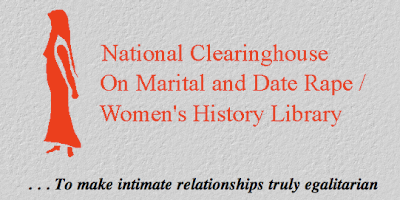 
Who We Are And What We Do

We are researchers. Started in 1978, when marital rape was a crime in only 4 states, the Clearinghouse follows current cases nationally and has compiled over 700 files of legal briefs, legislative testimony, bills, statutes, law reviews, newspaper clippings, magazine and journal articles, statistics, published and unpublished studies (sociological, historical, psychological, medical, etc.) and letters.

Among our publications are a pamphlet on the landmark 1978 Rideout case in Oregon, a State Law Chart showing where marital, cohabitant and date rape are still legal (in some statute sections) and "Prosecution Statistics".

We are also involved in researching all the cases which have come up in California and the other 49 states plus the military and federal land where marital rape is now a crime. District Attorneys use us as the cases progress, as do defense attorneys who are defending marital rape victims who have killed their husbands in self-defense, and family law attorneys whose clients suffered.

We are public educators. The NCMDR is dedicated to preventing potential rapes through vigorous education of the public as a whole. We have and will continue to utilize the media and public forums to dispel the myths that most rapes occur in the streets, and that most victims are indigents or prostitutes. In fact, the setting for most rapes is the home, and while some victims are strangers to the perpetrators, many are their dates, cohabitants or wives.

NCMDR representatives are available as consultants and speakers about our research into the truth of the Greta Rideout case, and about the successful campaign to change the rape laws in California since 1979, and our 45 other states and federal campaigns to extend equal protection to wives, cohabitants and dates. Speakers representing NCMDR have appeared at the new York County Lawyers Forum on the Law and Psychology of Marital Rape, the Laws Schools of New York University, Brooklyn, University of Michigan, University of Minnesota, University of Washington, and Cal Western, as well as 300 undergraduate colleges and high schools.

In addition, we provide speakers on a variety of topics concerning women, and present seminars for shelters, churches, legal personnel and others who work with battered women.

We are litigation advocates. As a data bank and resource center, the only one of its kind, NCMDR acts as an advocate for marital and date rape victims, offering a base of support from which to draw strength, as well as necessary information, both during and after legal proceedings. We have worked with major cases at the appellate and high court levels in Alabama, Missouri, Minnesota, Florida, Georgia, Massachusetts, Nebraska and New Jersey, all of which were successful. We work closely with District Attorneys prosecuting marital rape cases, and with defense attorneys representing women who killed husbands who beat and raped them.

Our advocacy role is national in scope -- NCMDR director, Laura X, directed the successful 1979 campaign to criminalize marital rape in the State of California. NCMDR has also assisted concerned groups in 45 states in successful bids to win anti-marital rape legislation. Our resources, including time, expertise, files, publications and contacts, are constantly used in ongoing efforts to have marital, cohabitant and date rape recognized as a crime in every part of the sexual assault codes in the remaining 30 states.

We are organizers. NCMDR has helped community groups in various states organize on the issue of women’s most basic right, the right to control their own bodies. Local organizations all over the US have based campaigns for political and social change, including outlawing marital and date rape, in information supplied by our personnel and files.

Among the files we keep are names and addresses of interested individuals who correspond with us, and people who sign up on mailing lists at national conferences. We provide these files to groups and individuals for the purposes of getting people to give testimony and doing local and statewide organizing.

Coalitions of women’s groups get together and invite NCMDR representatives to speak on marital rape and other women’s issues. Our talks often have a catalytic effect, resulting in the organizations of the nucleus for a network among women’s advocates.

We give technical assistance. In addition to the assistance given by our educational resources, we have provided training workshops and seminars at the Association of Women in Psychology Annual Conference, the Far Western Regional Women and Law Conference, and the last two annual Women and Law Conferences, the First World Congress on Victimology, two conferences of the National Women’s Studies Association, and the National Coalition Against Sexual Assault, and many others. We have participated in panels at the American Sociological Meetings, the American Society of Criminology Meeting, and in the spring of 1982 produced a professional development one-day seminar for the Academy of Criminal Justice Sciences, and a joint program for the Graduate School of Education, and the Women’s Studies Program of the University of Pennsylvania with the Domestic Abuse unit of the district attorney’s office in Philadelphia.
Posted by The Awareness Center, Inc. at 4/02/2013 03:23:00 PM