Back in 1985 E. Sue Blume developed “The Incest Survivors:  Aftereffects Checklist”, which later was published as a book. Her list was widely used by survivors and at the time by mental health professionals as a standard diagnostic tool. 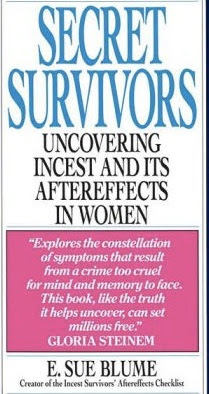 INCEST is any use of a minor child to meet the sexual or sexual/emotional needs of one or more older or more powerful persons in ongoing emotional relationship(s) with that child (parent, step- or grandparent, sibling, babysitter, mother’s boyfriend, teacher, rabbi, priest, family doctor, etc.). Although incest has traditionally been defined as sex and/or marriage between close relatives, above all, it is child abuse—an assault on the child’s sexual boundaries by the very person(s) entrusted with her care. It is a violation of a dependency bond, not of a blood relationship. And it does not require touch. A child can be violated through inappropriate photographs, the way she is talked to or by the way she is looked at.

Incest is such a traumatic experience that its victims may forget that it even occurred. But its scars live on, confusing in their seeming meaninglessness. Problems with sex, trust, touch, addictions, paralyzing depression, memory, shame and guilt can feel crazy and out of control, especially when the cause is unknown. This Checklist describes the consequences of incest trauma. It offers a profile of the post-incest experience in women (although many items apply to men as well), or “Post-Incest Syndrome”. It can be used as a guide to help survivors understand that there are legitimate reasons for their unrelenting difficulties—that, in fact, these “problems” are actually valiant attempts to cope with an impossible situation, and to meet healthy underlying needs.

Many of the items on this list can also apply to survivors of childhood abuses such as battering, or adult children of families where there is a history of alcoholism. Incest is especially common in alcoholic families, although not all alcohol-involved abuse is attributable to the disease of alcoholism. Incest perpetrators often apply the same defenses to their behavior as those used by alcoholics: denial, minimizing, and projection of blame. Additionally, perpetrators, just like victims, may dissociate the abuse. Still, incest is always the responsibility of the abuser. Although incest perpetrators are often described as “sick,” for the most part, this behavior is a choice—intentional, planned, and purposefully hidden.
Have you been struggling with problems that nothing seemed to help, for which even therapy could not find a cause? If the majority of the items of this list apply to you, you might want to consider whether you are a survivor of incest. Of course, you should never allow a checklist, or another person, to determine whether you have been abused. Only you can determine this, and the quest for such answers is long and painful. Even then, remembering is not the end of the process of recovery, but the beginning. If you are a survivor, above all, know this: you are not to blame. And healing is possible; with help, you can break free from the self-blame, isolation, and the entrapment of Post-Incest Syndrome.
This Checklist is based on an original list by New York Women Against Rape, as well as extensive observation of and communication with survivors. To all who contributed: your generous sharing of your experiences and pain is a gift to all survivors.