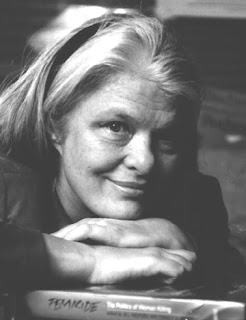 The X symbolizes the anonymity of women's history and the legal ownership of women. That legal doctrine permits Marital and thus Date Rape.

Laura X was the founder and Director of the National Clearinghouse on Marital and Date Rape in Berkeley, California.  The Clearinghouse began in 1978 as a project of the Women's History Research Center, which Laura founded in 1968 and directed throughout its 21 years.  She graduated from the University of California and has spoken extensively in North America and internationally during the past 18 years.

Laura led the successful 1979 California Campaign as the director, to make Marital Rape a crime. Not only has she acted as consultant to 45 other state campaigns on Date and Marital Rape, she has also actively collected and maintained documents about the status of exemptions from prosecution in the rape laws, which she has been trying to get repealed over the last 20 years.

Laura X has been cited many times for her work, including a Woman of Achievement award (from Mademoiselle magazine), a World Congress of Victimology Award for Innovative Programs and Services, as well as commendations by the American Library Association and Surgeon General Koop.