Some Common Characteristics of Survivors of Incest

Some Common Characteristics of Survivors of Incest
VOICES in Action, Inc. - January 1, 1989 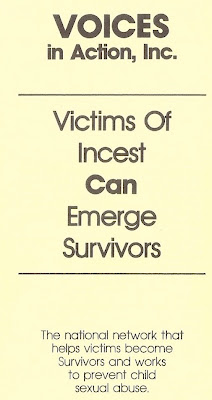 How we react to the abuse may be a distinct and similar as our stories.  To survive the betrayal of trust and the violations of our bodies, we developed survival skills which may have been effective at the time.  Victims of child abuse tend to carry at least some of these learned skills into adulthood; as we recover, we struggle to let go of these old behaviors and patterns.  A large measure of our recovery is our ability to find and adopt new, healthier ways to cope as we seek to reclaim our lives.