Prior to murdering 8-year-old Nathan Scharf (Nussen Yaakov Scharf) on May 3, 1977, Lawrence Gordon had been arrested four times on charges of child molestation.  Between 1972 to 1977, Gordon had been convicted on three of the four sexual offenses.  Lawrence Gordon also went by the name of Lawrence Mc Quill.  Under that name he had been arrested seven times since 1968.  Besides the sexual assault charges, Gordon had also been arrested for arson, on charges of assault and possession of a weapon, some of these charges were still pending at the time of the boys murder.  Nathan Scharf was the son of Rabbi Solomon Simpson of the Ocean View Jewish Center.

According to various reports Lawrence Gordon threw Nathan Scharf from the roof of a six-story apartment building in Brooklyn.  The boy was found lying on the ground, just around the corner of his home.  He was naked from the waste down.  At the time of the murder Gordon worked as a security guard at the building in which Nathan was thrown.

Prior to the murder Judge William H. Booth stated he had two favorable confidential psychiatric reports regarding Mr. Gordon's behavior, and had agreed to discharge him as long as he continued with his psychiatric treatment at a downstate medical center.  One of the reports stated he had a job at the Manhattan Beach Jewish Center and was hoping to obtain a position at the Transit Authority.

New York --Following Hebrew ritual, 8-year-old Nathan Scharf, the son of a rabbi, was buried before sundown on the day following his death.

The boy had been hurled to his death from the roof of a six-story building near his Brookyn home, allegedly by a building security guard with a prior record of child molestation.

Lawrence Gordon, 32, was picked up for questioning at the scene of the crime Tuesday night and was booked for murder about nine hours later, police said.

Gordon worked at the complex only on weekends, but was a familiar figure with area children, whom he often tried to impress by flashing his guard's badge and handcuffs, according to a police spokesman.

The suspect had been arrested four times in the last five years, for a misdermeanor, bigamy, child molestation and an assault and weapons charge.

He plead guilty to the first three charges. There was no record of the disposition of the fourth charge.  Gordon was given a conditional release on all his convictions, a status similar to parole.

His scratched and battered body, nude from the waist down, had been found about 8:30 p.m. Tuesday. 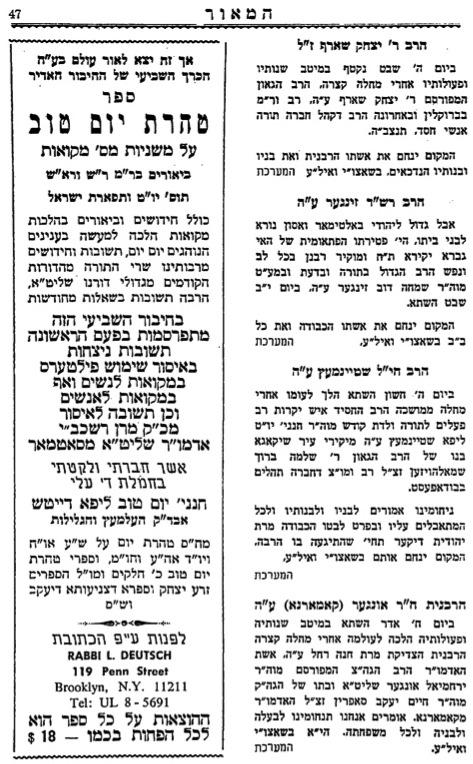 New York –– Police arrested a building security guard Wednesday and charged his with tossing a Brooklyn rabbi's 8-year-old son form the roof of a six-story building.

Security Guard With a Police Record Charged With Murder of a Boy, 8
By Emanuel Perlmutter
New York Times - May 5, 1977

A security guard whose police record includes sexual abuse of a child was charged yesterday with hurling an 8-year- old boy to his death Tuesday night from the roof of a six-story apartment building in Brooklyn.

The murder conviction of a man who at first confessed to killing an 8-year-old boy by hurling him from a Brooklyn roof in 1977 was set aside yesterday by a New York State Appeals Court and a new trial was ordered.

Man Guilty in Slaying of Child
The Associated Press - February 19, 1982

A Brooklyn jury yesterday visited a rooftop from which the 8-year-old son of a Hasidic rabbi was thrown to his death, then returned to the court and quickly found the defendant guilty of murder.

The defendant, Lawrence Gordon, who was a security guard in the apartment complex where the boy was killed, could get up to 25 years to life in prison when he is sentenced March 15.

It was the second murder trial for Mr. for Mr. Gordon. whose first conviction was reversed in 1980 on the grounds that a confession has been obtained improperly without his lawyer present.

The victim, Nathan Scharf, was found dead, naked from the waist down, on May 3, 1977, in the rear of 2685 East Seventh Street in the Sheepshead Bay section of Brooklyn.

The judge said a recent court ruling had made such visits to the scene permissible if both the defense and prosecution agreed.

Mr. Gordon, who was 32 at the time of the killing, had been convicted of crimes on three occasions.  One of the convictions, in 1973, was for sexual abuse and endangering the welfare of a child.  His other convictions were for bigamy in 1973 and for falsifying a report of an incident in which he was involved in 1973.

He was giving conditional discharges –– tantamount to parole –– after each conviction.

Appeal by defendant from a judgment of the Supreme Court, Kings County (Goldman, J.), rendered March 15, 1982, convicting him of murder in the second degree, upon a jury verdict, and imposing sentence.

The evidence adduced at trial, while wholly circumstantial, was sufficient to establish beyond a reasonable doubt that on May 3, 1977 defendant killed eight-year-old Nathan Scharf by throwing him off the roof of a six-story building in Brooklyn (People v Benzinger, 36 N.Y.2d 29, 32). Witnesses put defendant in the company of the boy, who had a bicycle with him, from shortly before 8 p.m. until they were last observed together in the elevator heading up to the roof of the building at about 8:15 p.m. About five minutes thereafter, a tenant heard a shattering noise on the terrace. Investigation led to the discovery of Nathan's broken body, naked from the waist down, on the terrace. His bicycle was found in the stairway, next to the roof landing. Prior to his arrest, during questioning by the police, defendant gave a false alibi. After his arrest, defendant made damaging admissions outside central booking to television news reporters who questioned him about the crime.

Defendant stated to one of the reporters that he did not know what he was doing at the time; that he was intoxicated and an alcoholic; and that he was sorry about the whole thing. He also stated that he only knew the boy from the neighborhood, did not know the boy's family and did not know that his father was a rabbi.

We have viewed the videotape and find that it was properly admitted into evidence. Uncounseled statements made after a defendant has requested counsel are inadmissible only if elicited by an agent of the State (People v Hobson, 39 N.Y.2d 479, 481). There is no evidence here that the statements made by defendant during the television interview were induced, provoked or encouraged by any actions of the police officers (see, People v Harris, 57 N.Y.2d 335, 342, cert denied 460 U.S. 1047; People v Jones, 47 N.Y.2d 528). On the contrary, defendant freely decided to talk to reporters in an informal, on-the-street meeting. Thus, the introduction of the videotape did not violate his right to counsel (People v Hobson, supra, at p 481).


Over the years the Scharf family has over come all sorts of adversities.  Rabbi Yitzchok Scharf was born in Tarnopol, Poland in 1918. He had three sisters and four brothers. The Soviets deported Yitzchok and his brother Moshe to Siberia. They are the only members of their family who survived the holocaust. After the World War II, Rabbi Scharf came to an Italian displaced persons’ camp where he met and married Sheindel Trebitz from Subotica Yugoslavia. On January 7, 1950 they immigrated to the United States.  Rabbi Scharf, served as a congregational rabbi for 25 years. He passed away in 1979.

Some of the information on The Awareness Center's web pages may contain copyrighted material the use of which has not always been specifically authorized by the copyright owner. We are making such material available in our efforts to advance understanding of environmental, political, human rights, economic, democracy, scientific, and social justice issues, etc.
We believe this constitutes a 'fair use' of any such copyrighted material as provided for in section 107 of the US Copyright Law. In accordance with Title 17 U.S.C. Section 107, the material on this site is distributed without profit to those who have expressed a prior interest in receiving the included information for research and educational purposes.
For more information go to: http://www.law.cornell.edu/uscode/17/107.shtml. If you wish to use copyrighted material from this update for purposes of your own that go beyond 'fair use', you must obtain permission from the copyright owner.
Posted by The Awareness Center, Inc. at 5/03/1977 01:31:00 AM No comments: