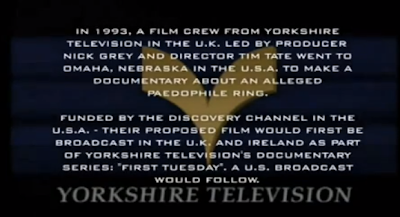 Conspiracy of Silence is a 56-minute unreleased documentary film produced by Yorkshire Television in 1994.
The subject of the film is an alleged child sexual abuse ring involving a number of prominent Nebraska persons, including Lawrence King, an Omaha banker, political fundraiser, and convicted felon.
The documentary was scheduled for broadcast in the United States on cable outlet Discovery Channel on May 3, 1994.
However, it was never aired. Proponents of the film claim that it was withdrawn due to political pressure; neither Yorkshire Television nor Discovery Channel commented officially on why it was not aired.
Posted by The Awareness Center, Inc. at 5/03/1994 11:22:00 PM No comments: