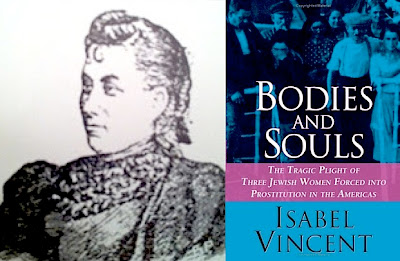 Sophia Chamys was an extremely brave teenager, and someone who should never be forgotten.  Sophia was one of four women back in the late 1800s who were fighting for the civil rights of teenage girls and women who were kidnapped and prostituted in an international human trafficking ring back called the Zwi Migdal Society.

Sophia was from an extremely poor Jewish family, living in small shtetl outside of Warsaw, Poland.  In the early 1890s her father "sold" his thirteen-year old child to Isaac Boorosky for eight rubles –– under he pretense of working as a maid in his widowed mother's kitchen.  Instead of working as a maid, Boorosky transported her along with several other teenage girls to Buenos Aries Argentina where they were prostituted.  At one point Boorosky married Chamys.  The marriage was one in which she was subjected to extreme forms of domestic violence.  Back in the 1880s, a woman was considered property, needless to say being married to a pimp, meant she was brutally raped by several men along with money exchanging hands.

Sophia Chamys lost her life five years later, at the young age of eighteen from Yellow Fever.  Reports stated there were scares al over her body, where her husband Isaac had harmed her during his fits of rage.

Prior to her death, Sophia shared her story with the local police.  Many knew she wanted it documented.