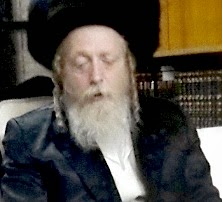 
Convicted sex offender.  Served a 16-year sentence on a 1997 conviction in the District Court of Tel Aviv for raping, sodomizing and sexually assaulting a child relative.

Rabbi Convicted Of Pedophilia To Be Released From Prison, Will Become Rebbe
By Shmarya Rosenberg
FailedMessiah Blog - March 7, 2013

The Beit Shemesh Shomrei Emunim community was left without a rebbe – temporarily – because Rabbi Yaakov Yitzchak could not fill the role.
Why?
Because he was serving a long prison sentence for rape, sodomy, sexual abuse of a minor, incest and obstruction of justice.
Roth is now in the 12th 16th year of his sentence. He has claimed since his arrest that he was being set up by opponents. He has never admitted guilt or apologized.
Roth will be released from prison today, Behadrei Haredim reports, after serving his full sentence.
He is expected to open a hasidic court in Beit Shemesh, just as his father wanted him to do.

An ultra-Orthodox rabbi from Israel is being held in New York without bail for allegedly hiding his monstrous sex crime record in order to get a US visa and come to New York.
Yakov Yitzchak Roth — a “rebbe” in the Hasidic group Shomrei Emunim — was arrested Tuesday in Borough Park by cops with the NYPD Special Victim’s Squad.
He had flown here from Tel Aviv in late August after swearing in a visa application that he had never been arrested or convicted, according to the federal complaint against him.
In reality, just six months earlier he had finished serving a 16-year sentence on his 1997 conviction in the District Court of Tel Aviv for raping, sodomizing and sexually assaulting a child relative, the complaint said.
Roth’s attorney, Shulamis Peltz, declined to comment on the case, except to say, “The current allegations are just allegations and have not been proven.”
Roth, whose father, Rabbi Avraham Chaim Roth, led a small congregation of 200 followers in Jerusalem before his death in August, 2012, is due back in Brooklyn Federal Court for a bail hearing on Monday.
_________________________________________________________________________________


FAIR USE NOTICE
Some of the information on The Awareness Center, Inc.'s web pages may contain copyrighted material the use of which has not always been specifically authorized by the copyright owner. We are making such material available in our efforts to advance understanding of environmental, political, human rights, economic, democracy, scientific, and social justice issues, etc.
We believe this constitutes a 'fair use' of any such copyrighted material as provided for in section 107 of the US Copyright Law. In accordance with Title 17 U.S.C. Section 107, the material on this site is distributed without profit to those who have expressed a prior interest in receiving the included information for research and educational purposes.