Recently, self proclaimed psychotherapist, Nechemya Weberman of Williamsburg, NY was charged with molesting one of his clients since she was twelve-years-old .

In an attempt to help this well liked neighbor, members in the Satmar community organized a fundraiser to help cover Weberman’s legal expenses.

A few hours after signs were posted throughout the community advertising the Weberman fundraiser, supporters of the alleged victim were outraged and organized a historic protest rally.  Several individuals stated that Nechemya Weberman, was “a serial sexual predator and that this girl was not his first or only victim”.

View slideshow: Protest Against Weberman Fundraiser
According to the New York Daily News, there were over a hundred activists facing off against thousands of supporters of Weberman.  The protesters were made up of adult survivors of sexual abuse, family members and friends -- all coming together in hopes of having their voices heard and educating the community many had been raised in.

According to Motie Weiss, one of the organizers of the protest rally -- as group members were unpacking their signs, an unidentified man came charging at them.  The police jumped into action and immediately made an arrest.  According to other reports there was at least one other arrest made.
Another rally goer stated that as he was walking to his car after the rally that all of a sudden he was surrounded by members of the Satmar community.  He started fearing for his safety, when police officers came over and broke up the crowd.

Motie Weiss shared that the protesters main message was to “Protect Victims and NOT those who offend children”.  During the rally members of his group chanted several messages including: “A mikvah is not a playground” and “Our children are not toys’.  There was also chanting in yiddish geared towards kids in hopes of educating the community, telling children to  “ask your father what a molester is?”

A few rally goers stated that as the night progressed the hasidic crowd energy turned into anger and there was a definite fear that violence might errupt, yet there was a good police presence in hopes of protecting the protesters.

It was also reported that at one point hateful signs were pulled out by members of the Satmar community against long time victim activist, Rabbi Nochem Rosenberg, who back in 2008 was shot after refusing to stop his hotline dedicated to educating the yiddish speaking community about sexual abuse.

Tim Walsh, a survivor of clergy sexual abuse by a priest, shared that he came to the rally to be supportive to all survivors and to protect children of all faiths and ethnicity's.  Mr. Walsh shared that as he was walking to his car to leave, he was surrounded by community members in what appears to be an intimidation attempt.  When he confronted the spokesperson of the group and asked if he “was trying to bully him”, the other members laughed and dispersed. 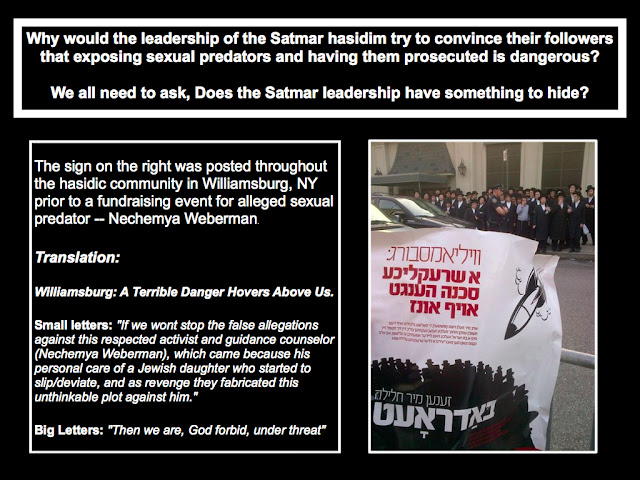