There is an group of survivors in Baltimore that has a history of posting signs just like this to warn community members of alleged offenders.  Several years ago they posted information like the information provided below regarding allegations regarding rabbi Yisroel Shapiro several years prior to his arrest and prosecution.  At the time community leaders responded just as they are with Jason Saver.

If anyone is a suspect of child molestation all calls should be directed to either child protective services or the police.  Shomrim should NOT be a part of the equation.  The following flyer was placed in several different orthodox synagogues in Baltimore without permission of Shomrim.

Background information on Jason Saver:
Where, What When

"Baltimorean Jason Saver’s work in New Orleans has yet to begin. Commissioned as a major in the Maryland Defense Force by General Smalkin, as a Jewish chaplain, he awaits his deployment date to the Gulf States area. The third generation soldier, and male nurse, received a donation of kosher food from the Jewish Soldier Foundation. He will be doing crisis intervention for Katrina’s and Rita’s victims and emergency responders.

I didn’t have to respond to the deployment,” said Major Saver, “but I feel it is important. As a pastoral counselor, I will be helping people cope with post-traumatic-stress disorder.”

Major Saver is willing to do whatever is necessary to help out the hurricanes’ victims, even if it means staying over Yom Tov. “It’s not just a mitzva or a chesed. It’s a kiddush Hashem (sanctification of G-d’s name). When a tragedy happens and people respond, we are emulating Hakadosh Baruch Hu (G-d).”

From: Azi Rosenblum <arosenblum@remsource.com>
Date: May 11, 2012 3:42:26 PM EDT
To: "all@shomrim.net" <all@shomrim.net>
Subject: FW: The Information on this Flyer put in all the Shuls This Morning Is Totally False!!!!

Hey old friends, anyone got any info on this? Its got the hotline # on it.


-----Original Message-----
From: Goldsmith, Isser [mailto:Isser.Goldsmith@baltimorecity.gov]
Sent: Friday, May 11, 2012 3:40 PM
To: Goldsmith, Isser
Subject: The Information on this Flyer put in all the Shuls This Morning Is Totally False!!!!
Importance: High

Numerous copies of the attached disturbing flyer were put in all the shuls this morning. I have very reliable information from a few sources that all the information on this flyer is totally false. Obviously, someone has a personal vendetta against Mr. Saver and is out to get him.

This poor guy's reputation must be restored because of these false allegations and I am alerting the rabbim to this fact.

Have a Good Shabbos. 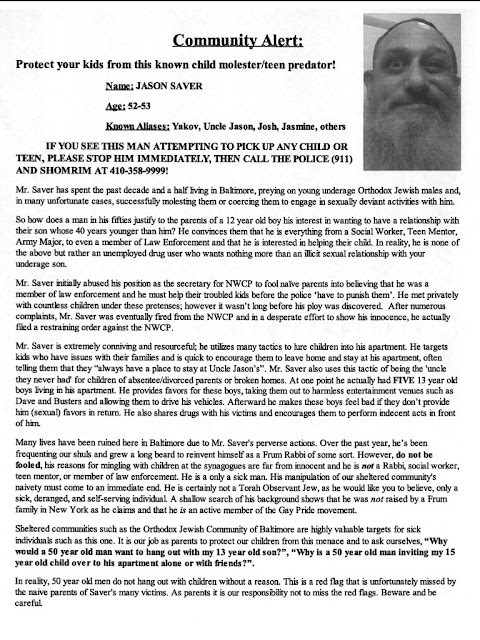 We came about this article by chance:
http://theawarenesscenter.blogspot.co.il/2012/05/possible-case-of-jason-saver-baltimore.html

After seeing the photo on the attached flyer, it is indeed the same Jason Saver that was run out of Jerusalem around
1986-87 for the same activity.

He was working at the Heritage House in the old city and after various complaints were made against him, was caught "Red Handed" by a Private investigator
and then ESCORTED to the airport where he returned to Hollywood Florida, taking a deal that if he left quietly no charges would be brought forward.

I know of this first hand.

Unknown said...
This comment has been removed by a blog administrator.
September 14, 2012