The Australian Jewish News - May 10, 2012
http://www.jewishnews.net.au/accused-child-rapist-fronts-magistrates-court/26065 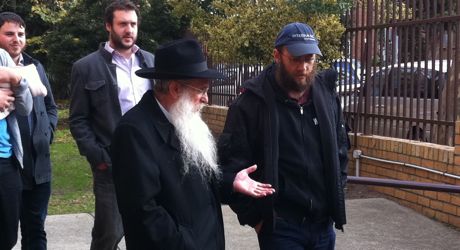 ACCUSED child molester David Samuel Cyprys was in the Melbourne Magistrates Court this week, charged with 53 offences, including six counts of rape, allegedly committed against 11 boys between 1984 and 1991.

Cyprys, who was employed at Yeshivah College, Melbourne, as a security guard, co-led a Jewish youth group and was a martial-arts instructor, is contesting the charges, which also include gross indecency, indecent assault and false imprisonment.

Police told the court that a number of complainants from Victoria, Brisbane and the United States, have come forward alleging they were molested by Cyprys.

“The accused was seen as a role model by members of the Jewish community, who trusted him in the company of their children,” a summary of charges stated.

In documents detailing charges against Cyprys, the 12 alleged victims, aged between seven and 17 at the time of the alleged offences, said they were assaulted at locations including a male mikveh, various homes in Elwood, Cyprys’s van, Yeshivah College, and the Gan Yisrael youth camps.

In a disturbing development, witness statements handed to the court gave a damning account of the handling of the alleged abuses by Yeshivah’s then director Rabbi Yitzchok Dovid Groner.

The mother of one victim said that abuses against her son continued for three years after she initially reported them to Groner, who she said took no action.

The father of another victim was allegedly told by Groner that his son “wouldn’t need counselling because [he] was under eight years old”.

”Rabbi Groner told me he had spoken to psychologists before and they had told him because the children are so young, counselling would not be necessary. Since that day I never heard another word,” the boy’s father stated.

Another mother testified that when she mentioned Cyprys’s name to Rabbi Groner, “he replied, ‘Oh, no, I thought we cured him’. By this I was sure that Rabbi Groner meant this sort of thing had happened before with David Cyprys.”

Rabbi Avraham Glick, presently a teacher at Yeshivah College, and its principal between 1986 and 2007, stated in court documents he could not recall any child or parent complaining to him about Cyprys but added ”attitudes at the time were very different to current attitudes”. He said Rabbi Groner was the only person customarily approached about “these type of issues”.

A relative of one of the alleged victims said: “Recently I saw an article in the Australian Jewish News and the name was that I associated with the locksmith for sexually assaulting children/youth. I thought you bastard. You must be the one who interfered with [my relative].” (sic)

Magistrate Luisa Bazzani ordered that the names of witnesses giving testimony be suppressed and that their evidence be given in a closed  courtroom, off-limits to media.

She overruled an alleged victim, a former Yeshivah College pupil, who applied to have his name publicised and for proceedings to take place in an open court, with access by media.

Asked if the complainant was “willing” to be named, he said he was, in fact, “keen”.

“This is something I have been suppressing for many years and I am quite happy for it be out there. I have taken it upon myself to take a leadership role in this case and encourage people to seek justice,” he told the magistrate.

But explaining her decision, Bazzani said that in six years as a magistrate, she had never before received an application from an alleged victim requesting their name be publicised and rejected it “for excellent policy reasons”.

Bazzani said publicising the victim’s name and allowing “extremely delicate” testimony to be reported by the media, would actually discourage others to volunteer information, especially in a community as tight-knit as Yeshivah, as they would not necessarily be aware the  person had volunteered to be identified.