Sex abuse rate climbs in the state of IL


Sex abuse rate climbs in the state of IL
By Stephen Rickerl
The Southern - December 26, 2012 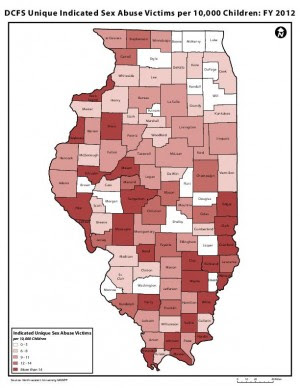 A report by the Illinois Department of Children and Family Services shows a 6 percent increase in reported instances of child sexual abuse in most parts of the state.

Reports of sex abuse have increased in 101 of Illinois’ 102 counties; Cook was the only county that saw a slight decline in cases this year. The report compares allegations of sex abuse from July 1, 2012, to Nov. 30, 2012, to the same period last year.

The rise in reports concerns DCFS, said department Spokesman Dave Clarkin, because 67 downstate counties had a higher than average sex abuse rate last year, including 24 counties in central and Southern Illinois with a rate more than double the state average.

“The high rate of sex abuse in downstate Illinois, particularly central and Southern Illinois, is rising even further this year,” said Clarkin “We are implementing a reorganization plan that increases the number of abuse investigators at DCFS so that we can get children and families the help they need more quickly, and we hope lawmakers will fund that plan in early January.”

The reorganization plan, which goes into effect Jan. 2, will increase the number of DCFS investigators by 138, but requires the General Assembly to restore about $38 million in funding cuts to the department.

According to the report, the demographics of the 2,208 sexual abuse victims last year: 65 percent are from outside of Cook County, 72 percent are under the age of 14, 58 percent are white, and while girls account for the majority of victims, one in five victims are boys.

The report shows sexual abuse is going unreported. One in four girls and one in six boys will be victims of child sexual abuse by the time they turn 18, but the state’s Child Abuse Hotline received only 1,366 calls from a family member, friend or neighbor — 82 percent of reports are made by professionals required to report abuse and neglect.