Starting around 1997, Vicki Polin joined forces with others who were acting as counter-missionaries against those who were bombarding Jewish chat rooms in their attempts to proselytize to unsuspecting, unaffiliated Jews.   It was soon after that Vicki started volunteering time as a JCOMM on AOL's Jewish Community online.  She started off monitoring the chat rooms and assisting those who attended various lectures in various Jewish chat rooms.

It was around that same time that she started creating The Awareness Center she started to offer an online chat room for Jewish survivors of sexual abuse/assault, which was originally based in the space created by the Jewish Community Online.

Within time Vicki realized there was  a demand for there to be a daily newsletter to help keep survivors and others interested in what was happening within the Jewish community when it came to the handling of sex crimes, healing resources and just about anything else you wanted to know about sexual abuse/assault but were afraid to ask.  It was at that time Vicki Polin created a yahoo group.  Early in Jan. 2001, the following Yahoo Group was created, which later changed it's name to The Awareness Center's Daily news and then to the Anti-Rape Newsletter.

To subscribe to our daily newsletter, look for the box on the right hand side of this page. 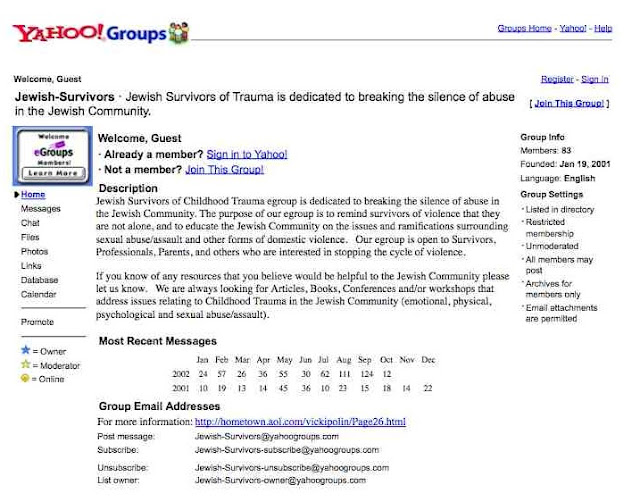