Can you say SEXISM? When girls are excluded

Can you say SEXISM?


In a country where religious and secular children are divided into separate schools, sport should be a unifying experience. That's not what happened in my backyard. 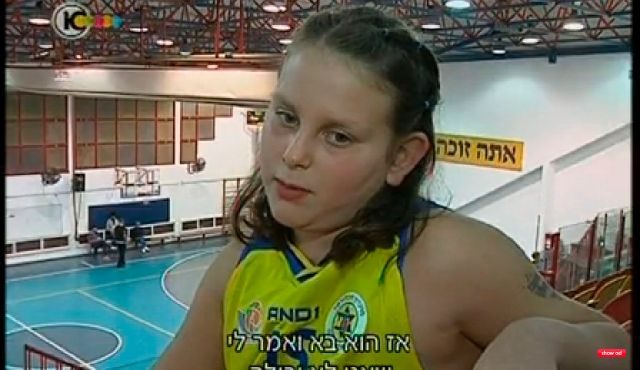 The troubling sexualization of little girls was symbolized last year by Na’ama Margolese in Beit Shemesh who was terrorized by Haredim protesting the "provocative" presence of her girls' elementary school near their neighborhood.

It was brought to the forefront in the "exclusion of women" debate, which was burning across Israel just a year ago, but faded over the course of 2012, when the lip service on the topic resulted in little real action to address it - and it has barely seen crossing the lips of politicians as an issue during this year’s election campaign.

But that doesn’t mean it is going away. Last week, a controversy appeared in my backyard, in Ra’anana, my hometown (as well as Naftali Bennett’s…) It happened on the basketball court of all places, at a game in a junior basketball league for fifth-graders.

Team sports for kids - especially soccer and basketball - is a big part of life in our neck of the suburbs, as it probably is in all of suburbia. The problem for Orthodox families is that the mainstream basketball league teams, even in Israel, hold both games and practices on Shabbat.


For that reason, there a national organization exists called Elitzur, promoting sports in the religious public and maintains sports teams across the country that accommodate religious observance - with no games on Shabbat. Elitzur has a long history - it was established in 1939 by the religious Hapoel Mizrachi movement, to encourage sports in the religious community. The vast majority of Elitzur teams are boys' teams, but they field girls’ teams as well.

I’ve always viewed the Elitzur phenomenon as something of a shame. In a country where religious and secular are divided into separate schools, extra-curricular activities such as sports is an area where young Israelis - religious and secular - should be able to experience being on the same team - literally - at a formative point in their lives.

And that is exactly what the problem started last week, as was first reported by the Channel 10. The game took place last week between Elitzur Ra’anana against a team from the town of Alfei Menashe. The two teams were ready for the first tip-off when the coach of the Ra’anana team, who had travelled to Alfei Menashe, saw that the Alfei Menashe team had a girl playing on the team - a rosy-cheeked blonde ten-year-old named Shiran Grinbaum.

The Ra’anana coach stopped the game. No girls allowed, he said.

He explained that the game could not continue with Grinbaum on the court, as he was “forbidden to permit the children to play because they are religious boys who observe the prohibition against touching members of the opposite sex” he said, referring to the practice known as “Shomer Negiah,” in which adolescent and adult men and women refrain from any physical contact until marriage. It applied, he said, even though his players were only ten years old.

The Alfei Menashe coach refused to pull Shiran from the game. Following the confrontation, the Ra’anana team went home. Interviewed on television, Shiran said tearfully she was ‘very insulted’ that the game was called off because of her, and that she had cried when, in previous similar circumstances, she had been forced to sit on the bench. Her mother also went on camera, speaking out against the absurdity of these kinds of gender restrictions for children.

The Channel 10 report sparked outrage - particularly when it came to the technical results of the incident. According to Israel's Basketball Association rules, the technical victory of the game belonged to Ra’anana. Officially, Alfei Menashe would be penalized for refusing to pull Shiran from the game, while there were no consequences to Ra’anana’s refusal to play because of a girl’s participation.

The reaction to the story on the social media came fast and furious, with numerous angry posts appearing on the wall of the Israel Basketball Association. Ra’anana feminist activist and columnist Hanna Beit Halachmi protested to Ra’anana mayor Nahum Hofri, calling for an end to all municipal subsidies for organizations like Elitzur that support the exclusion of women.

Beit Halachmi also wrote a letter to minister Limor Livnat saying that this "outrageous and shameful" incident has shocked "Orthodox and non-Orthodox alike.”

She called on Livnat, who holds the dual roles of Minister of Sport and chairperson of the Ministerial Committee on the Status of Women, to take action against Elitzur Ra’anana and its coach – as well as against the Basketball Association - for their discriminatory behavior.

It does seem outrageous to punish a team for refusing to bench one of its members because she is female. And I am confident that the "no playing against a girl" policy is not coming from the children’s parents, but from the Elitzur organization - which, like the Bnai Akiva youth movement and other national religious institutions - has become increasingly stringent when it comes to gender separation.

While no one can stop these groups from moving in their conservative direction, many members of the secular majority ask – as Beit Halachmi has - whether they want their taxes subsidizing groups that would leave a little girl weeping on the bench as her teammates play basketball.
Posted by The Awareness Center, Inc. at 12/31/2012 05:40:00 PM