History of the Anti-Rape Movement in Illinois 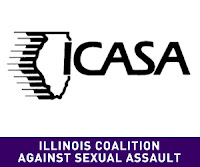 In early 1977, women activists from nine community-based rape crisis centers in Illinois gathered to “form a mutual support group…adding strength to any issue such as legislative action, and giving our strength to each other.” Searching for a name that reflected the profound social struggle necessary to end the degradation and rape of women, these activists named their group the Illinois Coalition of Women Against Rape (ICWAR).

As early as 1972, rape crisis workers in Illinois had established 24-hour crisis lines, conducted education and training programs, created thousands of brochures, offered self defense classes, organized and marched in “Take Back the Night” events and devoted thousands of hours to helping victims heal from the devastation of rape.

By linking their efforts through ICWAR, these early workers began their long journey to change the society. Like their sisters across the nation, coalition members advocated for legislative reform, insisted that police increase their arrest rates, demanded privacy for rape victims in emergency rooms and urged prosecutors to change plea negotiation procedures.

This monumental work, which forever changed the fundamental ways in which men related to women, was done primarily by volunteers. Rape crisis centers had very few resources other than dedicated activists. There was no formal education or professional training regarding how to do anti-rape work. However, once survivors broke the silence about the terror of rape, women devoted their minds, hearts, time and money to construct and sustain organizations that created the field of anti-rape work. These organizations changed practices in hospitals, police departments, the courts and within the field of psychiatry.

Victims and their advocates created rape crisis centers to fill a void – with a definition and purpose different than traditional mental health or social services. With the goals of social change, equality between men and women, and the fundamental principle of victim-centered services, the anti-rape movement offered a new model for institutional change and individual healing. In Illinois, this model gained recognition and credibility with each new accomplishment.

The first funding for sexual assault crisis centers, $148,889, was distributed by ICWAR to 12 centers in 1982. Later that year, four more centers were funded. Subsequent funds enabled centers to hire advocates, counselors and educators. Since 1982, centers have developed specialized services to meet the needs of children, adult survivors of child sexual abuse, teens and male victims. They have standardized volunteer training and developed curricula for conducting education and training programs. They have implemented protocols with hospitals and law enforcement agencies.

ICWAR changed its name to the Illinois Coalition Against Sexual Assault (ICASA) in 1984 and, with its many colleagues and supporters, continued to change the way the state responded to rape. Through the coalition, the centers adopted standards for local centers and created a governance structure to allocate funds, track contract compliance, and provide technical assistance to help centers maintain services in their communities. ICASA continues to work on the cutting edge of legislative reform and to advocate for social change and the elimination of the oppressions that promote sexual violence.

MOVING FORWARD
We must remember that rape is a product of our culture, a culture that has created, fostered and perpetuated the reality that some individuals by virtue of their race, gender and/or their acquired status are treated better than others. We cannot forget that truth when we hear challenges and criticisms about how and where and by whom this work is done.

When working with police, prosecutors, mayors, state legislators, congregational representatives and other professionals, it is very easy to get a sense of being next to power.

Yet, the anti-rape movement is far too young and has too few victories for us to think we are one with the powers that be. We have achievements and accomplishments in the effort to stop rape and support victims that no one dreamed of 30 years ago, but we are still underdogs – still asking for justice, pleading for justice, waiting for justice.

The temptation to see rape as “others” do may be compelling, but we must remember that rape is a cultural phenomena and not just a single criminal incident. The temptation for a little relief from always being the “hold-out” in a collaborative effort is overwhelming. And, sometimes, after negotiating and debating and holding out for what you know is “right,” it would be a relief to simply accept the compromise position. It is not fun to be the conscience of a group, but if you are in the meeting because you are “the rape lady,” then you are there as an advocate for the survivor and an agent for social change on the crime of rape. Martha Burt, Janet Gornich and Karen Pittman’s words in 1984 are still pertinent today:

This work is never easy, either in terms of time or of the psychological stresses of repeatedly confronting the realities of rape in this culture. In addition, it seldom pays very well, if it pays at all. Thus the fact that so many people continue to do this work is encouraging. We take it as a sign of how well the feminist movement’s political activity raised issues surrounding rape and galvanized many women to devote their energies to trying to stop it and ameliorating the consequences. The movement’s insistence that society bears some responsibility for changing patterns of sexual assault continues to guide the activities of many rape crisis centers. For most women working in rape crisis centers, their activities reflect some level of commitment, often very great, to helping women help themselves recover and emerge strong after an assault experience…4

As we head into the future, ICASA is proud of its 23-year history of speaking out – and acting – on behalf of sexual assault survivors. At a conference of the National Coalition Against Sexual Assault, Sandra Butler, said: “While it is true that none of us will live to see a world of safety for women and children, we still celebrate our lives of meaning and purpose, passion, commitment and connection. We celebrate the ways in which we understand that none of us can make individual transformation without collective transformation.” We can work together to make this a more supportive nation for survivors of sexual assault and ultimately to stop rape so that one day the rape crisis services of which we are so proud are no longer needed.

1977     Illinois Coalition of Women Against Rape (ICWAR) is formed.

1984     ICWAR changes its name to the Illinois Coalition Against Sexual Assault (ICASA).

1988     Hearsay Exception is granted to child sexual assault victims under the age of 13.

1994     ICASA receives allocation for the SACY Project from the Illinois Department of Children and Family Services.

1994     The Violence Against Women Act is passed by Congress and signed into law.