Being an educated consumer: Jewish Survivors of Sexual Abuse/Assault 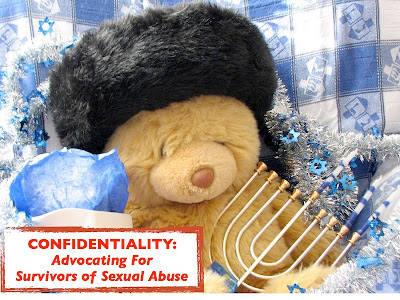 The history of the Anti-Rape Movement within Jewish communities worldwide really got started over fifty years ago when Marcia Cohn Spiegel realized her husband had been an alcoholic for many years. Marty did what many women did back in the 1950s ad 60s, and went to her rabbi and then a Jewish psychotherapist for help. Like in many problematic marital situations back then (and sadly what still goes on today) -- women were told that the it must be something they was doing wrong that would cause her spouse to drink. Marty was devastated and could never figure out what it was that she was doing wrong. It would take another ten years from the time she originally spoke with her rabbi that Ms. Cohn-Spiegel joined a feminist consciousness raising group. It was at that point she realized that she was NOT alone nor to blame for her husband’s behavior.

During the 1970s other Jewish women who were living with alcoholic husbands and or with domestic violence situations (which included cases incest and marital rape) began to communicate with each other. It was at that time that Marty realized that she had to take on a more active role and something to change the Jewish worlds view, attitudes and behaviors regarding these issues.

Having the right education, training and supervised experience is critical to being able to really learn the best ways to help and advocate for others. Unfortunately, over the past few years the anti-rape movement within the Jewish community has been hijacked by a small group of people who feel they know what they are doing, even though very few of them have any specialized training in advocating for others, let alone in how to help guide survivors in the healing process.

Due to of the lack of training of these “lay advocates”, many survivors of sex crimes who have been reaching out for help are getting hurt. The scary part is that these “lay advocates” due not understand the importance of confidentiality, listening to the needs and wants of each individual survivor and often just follow their own personal agendas.

Due to lack of training and these “lay advocates” are not certified or connected to a legitimate rape crisis center -- meaning there is no legal protections for those utilizing their services. If a “lay advocate” should breach confidentiality, there is no legal recourse that could be taken. It is as if you shared a confidential secret with friend and the confidential information was shared with others. There would be nothing legally that could be done, unless prior to sharing the information a confidentiality agreement was signed by both parties.

In the state of Illinois, along with several other states -- a certified rape victim advocate is protected from them being subpoenaed in court of law regarding what is shared between a survivor and the activist. Survivors can confide in rape crisis center counselors and advocates, knowing that they run little risk of having those communications disclosed publicly unless they consent to such disclosure.

It’s important for survivors of sex crimes to be educated consumers when they are asking for help. It’s great to have friends and family members who are supportive. For many, it’s a vital part of their own personal healing process. If you’re looking for help after being sexually victimized, one of the best places to start off is with your local rape crisis center. Not only can they offer you legal advocacy by legitimate activists, they also help direct you to both medical and psychological counseling by professionals who have the right training, education and experience.

Over the years survivors from the Torah observant world have been afraid to go to agencies outside of their communities for fear the organizations would not understand their unique cultural differences and needs. Though each person’s wants and needs are different, it’s important to know that those who work in legitimate rape crisis centers have to have course work in cultural diversity training.
Meaning, the majority of counselors, medical and legal professionals will do what they can to understand your unique situation. They are also bound by the confidentiality laws, which should reassure you that what you share with them will remain private.

If you live in Illinois contact one of the rape crisis counseling centers associated with ICASA (Illinois Coalition Against Sexual Assault).

If you live in another state click here to find a legitimate rape crisis center in your community.
Posted by The Awareness Center, Inc. at 9/20/2012 10:34:00 AM