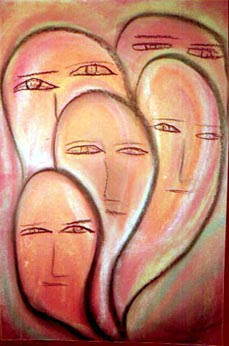 Everyone occasionally experiences dissociation without its being disruptive. For example, a person may drive somewhere and then realize that he does not remember many aspects of the drive because of preoccupation with personal concerns, a program on the radio, or conversation with a passenger. Perception of pain may become dissociated under hypnosis. However, other forms of dissociation disrupt a person's sense of self and the recollection of life events. When memory is poorly integrated

Dissociative identity disorder is serious and chronic and may lead to disability and incapacity. It is associated with a high incidence of suicide attempts and is believed to be more likely to end in suicide than any other mental disorder.

Several studies show that previously undiagnosed dissociative identity disorder is present in 3 to 4% of acute psychiatric inpatients and in a sizable minority of patients in psychoactive substance abuse treatment settings. It appears to be rather common, being diagnosed more frequently in recent years because of enhanced awareness of it, improved diagnostic methods, and increased awareness of childhood mistreatment and its consequences. Although some experts believe that increased reports of this disorder reflect the influence of physicians on suggestible patients, no firm evidence substantiates this view.

Etiology
Dissociative identity disorder is attributed to the interaction of several factors: overwhelming stress, dissociative capacity (including the ability to uncouple one's memories, perceptions, or identity from conscious awareness), the enlistment of steps in normal developmental processes as defenses, and, during childhood, the lack of sufficient nurturing and compassion in response to hurtful experiences or lack of protection against further overwhelming experiences. Children are not born with a sense of a unified identity--it develops from many sources and experiences. In overwhelmed children, its development is obstructed, and many parts of what should have blended into a relatively unified identity remain separate. North American studies show that 97 to 98% of adults with dissociative identity disorder report abuse during childhood and that abuse can be documented for 85% of adults and for 95% of children and adolescents with dissociative identity disorder and other closely related forms of dissociative disorder. Although these data establish childhood abuse as a major cause among North American patients (in some cultures, the consequences of war and disaster play a larger role), they do not mean that all such patients were abused or that all the abuses reported by patients with dissociative identity disorder really happened. Some aspects of some reported abuse experiences may prove to be inaccurate. Also, some patients have not been abused but have experienced an important early loss (such as death of a parent), serious medical illness, or other very stressful events. For example, a patient who required many hospitalizations and operations during childhood may have been severely overwhelmed but not abused.

Human development requires that children be able to integrate complicated and different types of information and experiences successfully. As children achieve cohesive, complex appreciations of themselves and others, they go through phases in which different perceptions and emotions are kept segregated. Each developmental phase may be used to generate different selves. Not every child who experiences abuse or major loss or trauma has the capacity to develop multiple personalities. Patients with dissociative identity disorder can be easily hypnotized. This capacity, closely related to the capacity to dissociate, is thought to be a factor in the development of the disorder. However, most children who have these capacities also have normal adaptive mechanisms, and most are sufficiently protected and soothed by adults to prevent development of dissociative identity disorder.

Symptoms and Signs
Patients often have a remarkable array of symptoms that can resemble other neurologic and psychiatric disorders, such as anxiety disorders, personality disorders, schizophrenic and mood psychoses, and seizure disorders. Most have symptoms of depression, manifestations of anxiety (sweating, rapid pulse, palpitations), phobias, panic attacks, physical symptoms, sexual dysfunction, eating disorders, and posttraumatic stress. Suicidal preoccupations and attempts are common, as are episodes of self-mutilation. Many have abused psychoactive substances at some time.

The switching of personalities and the amnesic barriers between them frequently result in chaotic lives. Because the personalities often interact with each other, patients with dissociative identity disorder often report hearing inner conversations and the voices of other personalities, which often comment on or address the patient. The voices are experienced as hallucinations.

Several symptoms are characteristic of dissociative identity disorder: fluctuating symptom pictures; fluctuating levels of function, from highly effective to disabled; severe headaches or other bodily pain; time distortions, time lapse, and amnesia; and depersonalization and derealization. Depersonalization refers to feeling unreal, removed from one's self, and detached from one's physical and mental processes. The patient feels like an observer of his life and may actually see himself as if he were watching a movie. Derealization refers to experiencing familiar persons and surroundings as if they were unfamiliar and strange or unreal.

Persons with dissociative identity disorder are often told of things they have done but do not remember and of notable changes in their behavior. They may discover objects, productions, or handwriting that they cannot account for or recognize; they may refer to themselves in the first person plural (we) or in the third person (he, she, they); and they may have amnesia for events that occurred between ages 6 and 11. Amnesia for earlier events is normal and widespread.
Because dissociative identity disorder tends to resemble other psychiatric disorders, patients typically give histories of having had three or more different psychiatric diagnoses and of prior treatment failure. As a group, they are very concerned with issues of control, both self-control and control of others.

Diagnosis
The diagnosis requires medical and psychiatric evaluation, including specific questions about dissociative phenomena. Under some circumstances, the psychiatrist may use prolonged interviews, hypnosis, or drug-facilitated interviews and may ask the patient to keep a journal between visits. All of these measures encourage a shift of personality states during the evaluation. Specially designed questionnaires can help identify patients with dissociative identity disorder.

The psychiatrist may attempt to contact and elicit other personalities by asking to speak to the part of the mind involved in behaviors for which the patient had amnesia or that were experienced in a depersonalized or derealized fashion.

Prognosis
Patients can be divided into three groups with regard to prognosis. Those in one group have mainly dissociative symptoms and posttraumatic features, generally function well, and generally recover completely with specific treatment. Those in another group have symptoms of other serious psychiatric disorders, such as personality disorders, mood disorders, eating disorders, and substance abuse disorders. They improve more slowly, and treatment may be either less successful or longer and more crisis-ridden. Patients in the third group not only have severe coexisting psychopathology but may also remain enmeshed with their alleged abusers. Treatment is often long and chaotic and aims to help reduce and relieve symptoms more than to achieve integration. Sometimes therapy helps a patient with a poorer prognosis make rapid strides toward recovery.

Treatment
Symptoms wax and wane spontaneously, but dissociative identity disorder does not resolve spontaneously. Drugs help manage specific symptoms but do not affect the disorder itself. All successful treatments that aim to achieve integration involve psychotherapy that specifically addresses the dissociative identity disorder. Some patients are unable or unwilling to pursue integration. For them, treatment aims to facilitate cooperation and collaboration among the personalities and to reduce symptoms. This treatment is often arduous and painful, and many crises tend to arise as a result of the personalities' actions and the patient's despair when dealing with traumatic memories. One or more periods of psychiatric hospitalization may be necessary to help some patients through difficult times and during the processing of particularly painful memories. Hypnosis is often used to help access the personalities, facilitate communication between them, and stabilize and interpret them. Hypnosis is also used to discuss traumatic memories and diffuse their impact. Eye movement desensitization and reprocessing (EMDR), applied cautiously, is a useful adjunct. EMDR tries to process traumatic memories and to replace negative thoughts about self that are associated with these memories with positive ones.

Generally, two or more psychotherapy sessions per week for 3 to >= 6 years are necessary to integrate the personalities or to achieve harmonious interaction among them that allows normal functioning without symptoms. Integration of the personalities is the most desirable outcome.

Psychotherapy has three main phases. In the first phase, the priority is safety, stabilization, and strengthening of the patient in anticipation of the difficult work of processing traumatic material and dealing with problematic personalities. The personality system is explored and mapped to plan the remainder of the treatment. In the second phase, the patient is helped to process the painful episodes of his past and to mourn the losses and other negative consequences of the trauma. As the reasons for the patient's remaining dissociations are addressed, therapy can move to the final phase, in which the patient's selves and relationships and social functioning can be reconnected, integrated, and rehabilitated. Some integration occurs spontaneously, but much must be encouraged by conversing with and arranging the unification of the personalities or must be facilitated with imagery and hypnotic suggestion. After integration, patients continue treatment to deal with some issues that have not been resolved. After postintegration treatment appears complete, visits to the therapist are tapered but are rarely completely terminated. Patients come to think of the psychiatrist as someone who can help them deal with psychologic issues, just as they periodically need assistance from a primary care physician.