"I'm Rubber You're Glue. . ." (Self Protection from Projection) 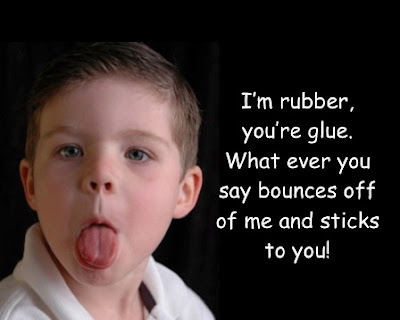 It's kind of funny how things we say to protect ourselves as children can have great meaning as adults. Do you remember: "I am rubber, you are glue. Whatever you say bounces off of me and sticks to you."? We can learn a lot from this poem. Many times, people we love and care about say things that are hurtful. Often what is said is a projection of their own feelings on to us; a kind of throwing out upon another that ideas that belong to them. The expression projection implies that what is cast upon another is considered undesirable to the one who projects. The one who blames another for his/her own mistakes or seeks a scapegoat is using projection as a coping mechanism.

Projection is one of the first defenses or protective mechanisms learned as a child. A child needs to feel a sense of importance. When this is threatened there becomes a need to feel a sense of some sort of magical power over another person, to feel safe, guiltless, important. When there is a conflict that is intolerable internally, a child will externalize the feelings on to someone or something. How many times have you heard stories bout a young child breaking something and saying "I didn't do it, Marc did it" or It just fell by itself". The child is unable to own his/her own feelings of guilt or shame. The same thing happens to us as adults.

But what do you do when you are the one who is being projected upon? What do you do with the feelings and protect yourself from feeling hurt? How do you disengage from the negative energy that is flowing? How do you NOT do unto others as they do unto you? The answers can be both simple and complex. The first step is being able to recognized a projection. The second step is learning not to internalize the feelings, in other words "Don't take it personally". Simple to say, yet extremely difficult to do. That's where remembering "I am rubber, you are glue..." comes in handy.

Most people want to have a good relationship with their family, friends, co-workers, yet experience difficulties because, as one client said "No one knows better than my parents and other family members how to push my buttons." "I get crazy and do and/or say things I wish I wouldn't." Sometimes I do things that are self-destructive just to make the feelings go away." Some common self-abusive behaviors include self-mutilation, suicide attempts, sexual acting out, alcohol/chemical abuse, binge eating, starving, etc. These symptoms can be a result of something someone said, or caused by intense feelings that one just doesn't know what to do with. Sometimes it feels like people I care about are trying to get me upset." "It feels like they want me to hurt myself". These are also projections.

Remember "I am rubber, you are glue, whatever you say bounces off of me and sticks to you" may help separate your feelings from someone else's projection. When you are feeling under attack and the child within is panicking, it may be helpful to remember this poem. Say it loudly to yourself when you feel that someone is saying negative things to you that do not seem to fit. It may help to stay separate from the intense feelings someone is trying to give to you. It can be a way to protect yourself instead of owning their feelings. Most important is that it may also help you with some of the intense feelings that may trigger some of your own negative reactions.
Posted by The Awareness Center, Inc. at 11/25/2002 10:12:00 PM