There's no more room under the rug 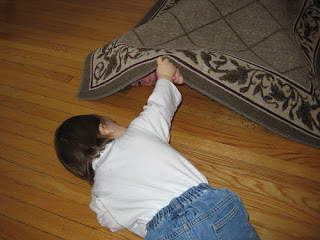 In 1996 Dr. Ira Sacker, a physician who specializes in treating eating disorders, reported that in the ultra-Orthodox communities of Brooklyn as many as one in 19 girls was diagnosed with an eating disorder. At first blush this may not seem high, but in fact it is about 50 percent higher than the rate found in the general population. Just a few weeks ago Dr. Yael Leiter, of the University of Haifa, said that Israel has one of the highest rates of eating disorders in the world. This rate is in no small measure due to the seriously elevated numbers of women in the Orthodox world who suffer with this problem.

In 1998 an epidemiological survey done by the State of Israel reported that substance abuse was just as prevalent among unaffiliated teens as Orthodox and Charedi ones. In 2002 a Doctoral dissertation that I was involved with found that teenage males in a yeshiva in the New York area had high rates of stress and used illegal substances to alleviate the pressures they felt. The rates of abuse were apparently not much different than those in the general population.

Studies of Orthodox Jewish teens’ physical abilities have shown that because of the limited time they have for recreational activities and the general frowning upon of organized sports after the age of bar mitzvah, most teens have bone calcium levels well below the acceptable amount and higher stress levels than their non-religious counterparts. A study recently performed at Bar-Ilan University found that religious teenagers are more likely than their peers to suffer from significant anxiety and self-loathing when they confront their developing sexuality. While the researchers struck a balance between the appropriate understanding of adolescent development and the needs of teens to learn to control their urges, they were just as clear in stating that the “scare tactics used in the religious public” only exacerbates the fears from which these teens suffer.

And if these findings were not enough, demographers studying the Jewish landscape in the United States have found that in a cohort measured in the 1990s Orthodox Jews retained only about 42 percent of those born into Orthodox families. Rates of Orthodox affiliation are bolstered by gaining new adherents and by a higher birthrate than other Jewish groups, but Orthodoxy remains essentially stagnant at about 10 percent of Jewish Americans.

While there are many anecdotal reports and some small general surveys I have not come across any definitive studies about the dropout rates from Orthodox religion. Nevertheless what is available suggests that, particularly for teenagers, the tenants of Orthodoxy are too stress-provoking and rely on creating fear rather than love for religious understanding and practice. When they are feeling stressed they have no avenues to help them cope with their anxieties. Interestingly, kiruv organizations know this and approach people not with threats and fear but with warmth and acceptance to draw them in.

In the last few weeks we have been confronted with the issues of bans. In a particularly spot-on piece, this newspaper found out the true underlying cause for the ban against the news website Vosizneias.com. Initially, we thought that the ban was based on a specific political issue. Turns out, we were right, but it wasn’t the issue we thought. The ban did not involve a politician and those linked with him. Rather it involved the definition of “shmutz.” When there are attempts by community leaders to convince federal prosecutors to let a convicted sex offender go free, the community should know about it. Only one website addressed the issue, albeit without using names. Apparently, someone thought that Vosizneias’s reporting of information — that could very well be helpful in protecting members of the community — was inappropriate.

There is no doubt that many in the Orthodox community are unwilling to take a public stance against abuse of any kind. This staunch position is still predicated on the mistaken assumption that if we keep it quiet, or if we handle it in our own way, our community will be better served. Ever so slowly we see rabbinic leaders speaking out against sexual abuse but then along comes this ban. It appears that we have yet to learn that the more we hide the more free reign abusers have. Young people seem to inherently understand this. They know that you can only hide so much under the rug before it becomes a stumbling block. Unfortunately, this creates a terrible conflict for them. The research shows that if you speak with teens you will find they are conflicted about many issues, but because of an environment of fear they cannot discuss their experiences and needs. Luckily, many find someone in the community they can talk to and trust.

Unfortunately, far too many do not and turn to self-destructive behaviors. These are the ones who are prone toward being victimized and in some measure ultimately drop out. We should do more to protect them. I would urge us to reconsider the bans — often garbage has to be put out at the curb and carted away.

Dr. Salamon, a Fellow of the American Psychological Association, is the founder and director of ADC Psychological Services in Hewlett, NY and a Board member of The Awareness Center. He is the author of numerous articles and several psychological tests. His recent books include, The Shidduch Crisis: Causes and Cures, published by Urim Publications and Every Pot Has a Cover: A Proven Guide to Finding, Keeping and Enhancing the Ideal Relationship, published by Rowman & Littlefield. His new book on Abuse will be available March, 2011.