LET YOUR VOICES BE HEARD: 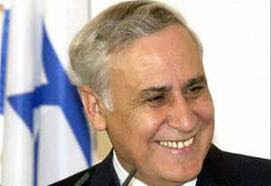 The massive media coverage which surrounded the rape trial of former President Moshe Katsav may lead to a reduction of his sentence, the publication of Katsav's full verdict revealed on Sunday.

The Tel Aviv District Court's conviction was announced at the end of December, but only part of the verdict was made public. Katsav was convicted on two counts of rape, indecent assault and other sexual offenses.

In the verdict, the residing judges severely criticized the media for holding a "drumhead court-martial" to the former president, adding that while the coverage would not annul the verdict altogether, it may weigh in favor of the defense in its attempt to reduce Katsav's yet-to-be-delivered sentence.

"We do not ignore the mental anguish the defendant suffered as a result of the infinite flux of harsh publications released against him through the media and which had declared him a sex offender prior to his trial," judges George Kara, Miriam Sokolov and Yehudit Shevah wrote in their verdict.

The judges issued severe criticism of the Israeli media, saying that "lines were crossed in an unprecedented manner" in regard to the Katsav affair, adding, however, that the former president was at fault as well.

"The defendant took on the same modus operandi utilized against him, and began shooting poisonous arrows at those he considered to be seeking his injury," the judges wrote.

In the newly published full verdict, the judges quoted past rulings which recognized the court's ability to take the defense's abuse of process claim into account when weighing a sentence.

The verdict continued, stating, "The court may rule that the harm caused to the defendant, although not sufficient to justify total annulment of the indictment, may be grounds for dropping specific charges or reducing his [Katsav's] punishment in the event of conviction."

Katsav trial judges also quoted an article written by former Haaretz legal writer, the late Prof. Ze'ev Segal and judge Avi Zamir, stating that the court could take the lack of decency and justice into consideration when sentencing the defendant.

The conduct of former Attorney General Menachem Mazuz was also scrutinized in the verdict, who was chastised for expressing his opinion regarding Katsav's behavior before he had decided whether or not to indict.

Key witnesses and public figures are also the target of the judges' criticism saying they "gave interviews 'upon the hills and under every luxuriant tree,' [in an excessive manner] while confidently declaring the defendant's guilt."

On Thursday the district court panel of judges ruled that the additional details that Katsav wanted released were liable to seriously violate A.'s privacy and could potentially lead to the disclosure of the identity of another complainant whose allegations were barred by the statute of limitations.

Katsav had requested that nothing other than details identifying the complainants be removed, claiming that any further omissions would result in a failure to present the full picture of the court proceedings.

The judges said the disclosure of the information may deter rape victims from filing complaints in the future. They further added that this was what led them to refuse a public trial.

The court did not, however, recognize the privilege that A. from the Tourism Ministry sought to invoke regarding other details in the verdict, saying that this was not a serious violation of her privacy.

Judges on Katsav: Confrontational and untrustworthy

While the full verdict does not change the tone or general attitude of the briefer version published two weeks ago, it does provide a great deal more detail regarding Katsav's conduct toward employees, including quotes by both victims and corroborating witnesses.

The verdict is surprisingly depleted of quotes from Katsav's testimony because the request that the court publish his full testimony is still pending.

Writing of Katsav's testimony, the judges wrote in their verdict the it could "not serve as a basis to determine findings," saying the former president's version was "unauthentic and insincere."

"[Katsav's testimony] was tainted with a confrontational attitude toward the accuser's representatives and by selective interpretation of both the witnesses' accounts and the evidence," the judges said, adding that his testimony "seemed more like an analysis of the evidence than the recollections of a person who wishes to give honest testimony as someone who experienced the events first hand and could testify from his heart on the horrible wrong done to him."

The judges went on to say that the "defendant demonstrated a miraculous memory in matters that could aid him in his defense, and with a lack of recollection in matters which could potentially implicate him."

Katsav was also noted for his "eloquent speech, adept at navigating words and expressions, like someone who can blow hot and cold wind at the same time.

When speaking of his confrontational style, the judges said the former president responded with "aggression, slander, and false accusations at whomever dared say anything that did not meet his expectations."

"His answers were verbose and long, drifting toward irrelevant and distant issues, despite repeated remarks made by both the court and his defense team," the judges remarked.

In general, the verdict reflected a complete trust in the victims' version combined with an almost complete distrust of Katsav's testimony. While Katsav is chastised for every inconsistency in his testimony, the judges treated the victims with forgiveness and understanding."

When referring to the main witness, A of the Ministry of Tourism, the judges wrote that they were under the impression that she did not "tell a tall tale, and her account was of a victim of sexual assault," adding that A "was not wily or sophisticated."

"She is naïve and innocent, prone to pleasing her environment and respecting authority," the judges wrote.
Posted by The Awareness Center, Inc. at 1/16/2011 10:33:00 AM