This appears to be business and usually in the orthodox world of Brooklyn. Once again rabbis care more about the reputations of convicted sex offenders then they do of those who were sexually violated. In this case the victim was the offenders daughter. Incest is the most common form of child molestation. 46% of all cases involve a relative being the offender.

Rumors are that several orthodox rabbis are proclaiming that Weingarten is innocent even though he was convicted in a federal court of law.  They are also attempting to raise funds to hire a top lawyer in hopes of getting him out of prison.

Weingarten is a danger not only to the child he molested, yet to all children in whom he may come in contact with.

The Awareness Center is asking that everyone send positive thoughts to the survivor of Weingarten.  She finally had her day in court and finally got justice for being a victim of a sex crime.  We all should be enraged that those who are supposed to be community leaders would fail us in this way.

Yisroel Weingarten is a member of the Satmar Sect in the Orthodox Jewish community of Monsey.  He traveled with his victim from Monsey, NY to Manchester, England and Belgium. 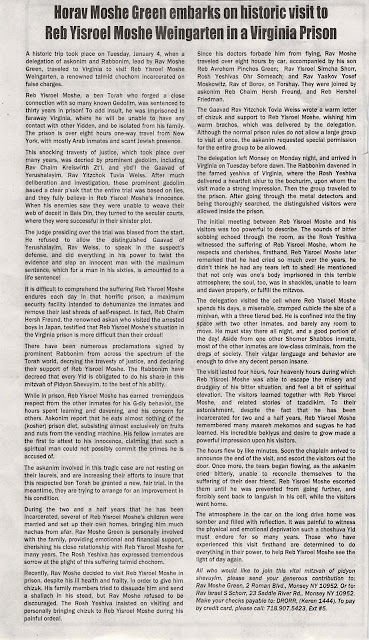 Federal agents yesterday arrested a Monsey rabbi on charges of sexually abusing a female relative for nearly a decade.

Rabbi Israel Weingarten, 58, was taken out of his home in handcuffs based on an August federal grand jury indictment and arraigned on five federal counts of sexual abuse in U.S. District Court in Brooklyn.
Weingarten, a divorced father of eight, pleaded not guilty before Magistrate Judge Joan M. Azrack. The judge ordered the rabbi held without bail in federal lockup. He is due in court Oct. 21.

The indictment charges Weingarten with having sex with the girl starting in 1990, when she was 9 years old, and ending about nine years later. The woman is now 28.

Weingarten is accused of sexually abusing the girl on a weekly and sometimes daily basis during that period of time, in Belgium, Israel and the United States, according to a detention memo filed with the court by the U.S. Attorney's Office in Brooklyn.

"He moved her to different countries in order to continue the abuse and to escape any threat that he would be apprehended as word of his abuse began to spread," U.S. Attorney Benton Campbell wrote.
"He has resorted to threats and violence to intimidate those who tried to protect the victim and other members of his family," Campbell wrote.

Weingarten's lawyer, Kenneth Gribetz of New City, said yesterday that the sexual abuse charges resulted from his client's bitter religious divorce about three years ago. He said the most recent sexual abuse allegations were about a decade old.

"The charges are from a lengthy, bitter divorce that has taken place over the years from Israel to Belgium to the United States," Gribetz said. "Six of his children living with him support him."

Weingarten has taught children for the Satmar Hasidic Jewish community in the United States, Belgium, Israel and England, the documents said.

He ran a Satmar school in Belgium and taught at Satmar religious elementary and secondary schools in Brooklyn.

Weingarten is charged with five federal counts accusing him of traveling around the world to have sex with the minor and avoid being charged.

If convicted at trial, Weingarten faces an estimated prison term of 168 to 210 months in prison, the U.S. Attorney's Office said.

Goldbarg told the judge that the Family Court case did not involve the victim of the charges in the indictment. Court papers accused Weingarten of hiding the children and using deceit in a Family Court custody battle.

Weingarten also has been accused of using force and deceit to prevent inquiries about his children's health, including an incident that occurred while the family lived in Kiryas Joel in Orange County.
Goldbarg said Weingarten was a "very manipulative, controlling personality" who had brainwashed his children into supporting him.

"He has demonstrated a willingness to interfere with investigations and intimidate witnesses," Goldbarg said.

The prosecution's court papers accused Weingarten of trying to kidnap the victim in England and assaulting a rabbi and his wife, who were protecting her.

Gribetz asked the judge to free Weingarten without bail or on a personal security bond, arguing his client "had no reason to flee."

Azrack said she was disturbed not only by the nature of the allegations but by Weingarten's behavior when the FBI came to his home. She said she believed he may be a danger to his own relatives.
"I'm not inclined to release him under any circumstances," the judge said. "I question how rational he is and whether he is willing to obey orders of the court."

Weingarten and six of his children refused to answer the door when FBI agents arrived to arrest him. The agents had to force their way into the house and then break down the door to a bedroom after Weingarten locked himself inside.

Gribetz suggested the brief standoff was a misunderstanding and caused partially by his client's fears and a language barrier.

Weingarten feared the men at the door were supporters of his ex-wife who had come to hurt him, Gribetz said, adding Weingarten claims he has been attacked before.

"He was even calling 911 for police to come help him," Gribetz said.

As Weingarten stood before the judge, a dozen men in Hasidic garb sat in the gallery, including Weingarten's brother and several men who said they were the rabbi's students.

Rabbi Jacob Moskowitz of Monsey said Weingarten was a "very nice person" who was well regarded as a Judaic scholar in Antwerp, Belgium, where he taught for years.

"He sits at home and doesn't hurt a fly," Moskowitz said, adding the allegations were the product of a "dirty matrimonial case."

He said Weingarten's students were so devoted to him that some had taken out mortgages to help him financially over the years as he faced allegations."He has a lot of supporters. People have a lot of sympathy for him," Moskowitz said.

Gribetz said Weingarten doesn't have any money or property to put up for any bail, even if the judge sets bond. He said his client was "in agony" about having to spend Yom Kippur in jail.

The prison he is in is NOT a MAX security prison - it is a medium and the population is nearly all American.