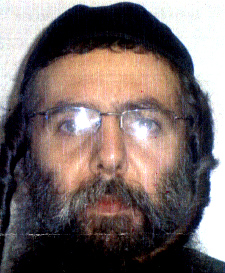 
Simon Benisty convicted sex offender was deported from the United States back to Israel on October 5, 2010.  He was originally convicted after molesting two girls aged 8 and 10. 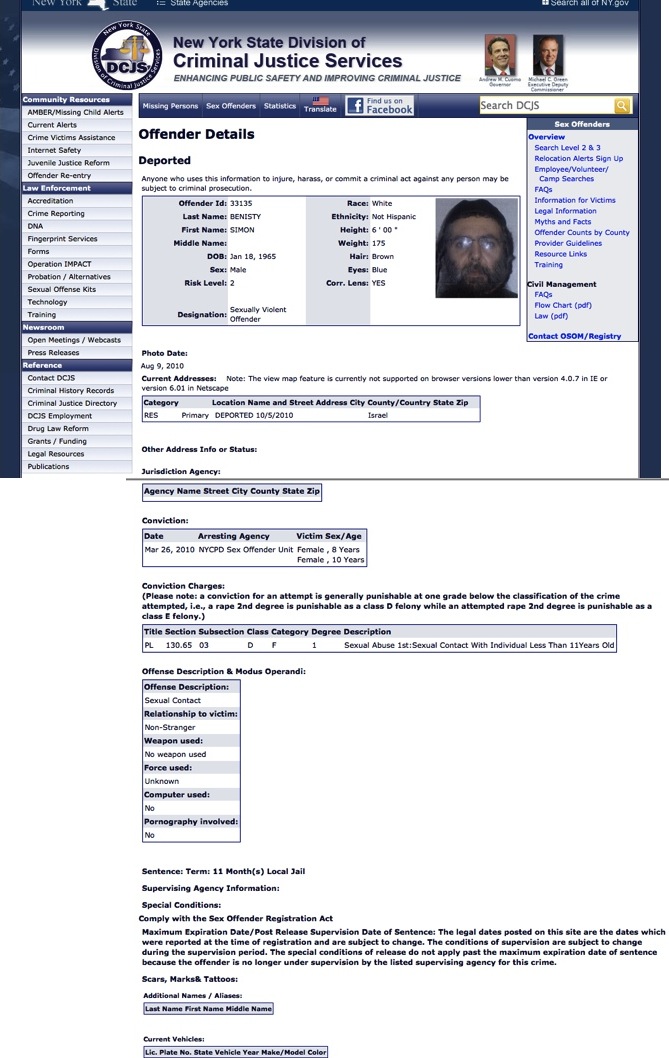 Forty-five year old Simon Benisty, a Haredi resident of Boro Park, was convicted of sexual abuse in the first degree involving an 8-year-old girl and a ten-year-old girl and was sentenced to only eleven months. According to the sex offender registry he is considered violent. He was deported on 10-5-10, only 7 months after his conviction. Yesterday a mere sixteen months after he got out of jail, he was arrested in Israel and confessed to similar assaults against at least another eleven children.

Brooklyn District Attorney Hynes likes to brag about his Kol Tzedek program and how it deals with sex abuse in the ultra orthodox community. Let’s see him take credit for this success, a likely outgrowth of another one of his many sweetheart plea bargains for molesters. Nuchem Rosenberg is not that far from right when he says “That Irish drunkard Charles Hynes drinks the blood of Jewish children with his Irish whiskey.” I am not going to go that far. I don’t know if he is an alcoholic and I don’t know his favorite drink. I do know that he cuts deals for Jewish votes over the bodies of Jewish children.

I am willing to bet that even Satmar will support his reelection bid in spite of their resentment over the Weberman conviction which exposed the impotence of their political power. They still know that they have no better friend than Charles Hynes. The same cannot be said for for a over a dozen young girls in Brooklyn and Jerusalem.

Pedophile with US record cops to multiple assaults

A suspected sex offender who has admitted to assaulting at least 11 minors was jailed in the US for similar offenses against two girls aged 8 and 10, Channel 10 revealed Thursday.
Police arrested Simon Benisty, a 48-year-old resident of Jerusalem, on Wednesday, after the mother of an 11-year-old girl filed a complaint against him over an alleged sexual assault against her daughter. In the course of the investigation, Benisty confessed to sexual misconduct against 10 other minors. He was remanded for six days on Thursday.

The New York sex offenders registry designates Benisty as a “sexually violent offender.” According to his page in the registry, he was sentenced to 11 months in prison and was subsequently deported to Israel in 2010. Benisty’s photo was published on a New York ultra-Orthodox community blog devoted to warning against sexual predators.

Israel doesn’t have a publicly available registry of sex offenders.

Police suspect that the leaders of the ultra-Orthodox community with which Benisty was associated in Israel learned of the complaints against him and, deciding against turning to the secular authorities, prescribed him a medication to curb his urges.

“The suspect used to exploit situations where there was no supervision of adults to commit various sexual offenses against minors,” the head of the investigation, Inspector David Katz, told Channel 10.

"Never doubt that a small group of thoughtful, committed citizens can change the world. Indeed, it is the only thing that ever has." --Margaret Mead