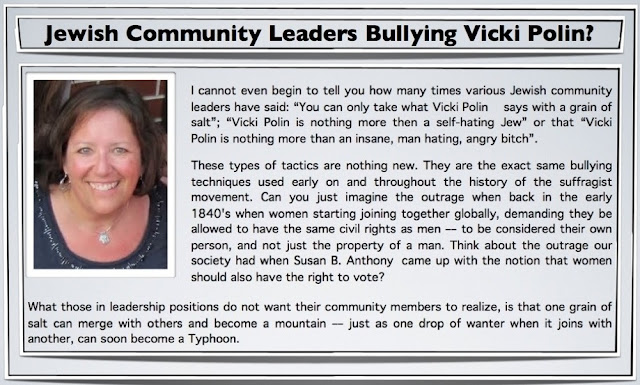 The attempts at marginalizing the work of The Awareness Center has been one of the most common defense mechanism used by various Jewish community leaders over the last fifteen years. The goal –– deterring those of us who have been pioneering forces of the anti-rape movement in Judaism.

These types of tactics are nothing new. They are the exact same bullying techniques used early on and throughout the history of the suffragist movement. Can you just imagine the outrage when back in the early 1840's when women starting joining together globally, demanding they be allowed to have the same civil rights as men –– to be considered their own person, and not just the property of a man. Think about the outrage our society had when Susan B. Anthony came up with the notion that women should also have the right to vote?

What those in leadership positions do not want their community members to realize, is that one grain of salt can merge with others and become a mountain –– just as one drop of water when it joins with another, can soon become a Typhoon.

In the orthodox Jewish world those who started spewing the hate against those of us who speak out against sex crimes are basically all a part of the culture of disturbed dominance –– and should all basically be considered cowards.

With hindsight it should have been expected, that religious community leaders who are afraid of losing their power and control over a society –– by a strong, intelligent, compassionate woman who did not grow up in the Torah observant world –– would be the perfect target for their anger.

Whenever there is someone who is an activist for any cause in which it might change the societal views on a topic, it should be expected that if the pioneering force would also be female, that everyone would automatically assumed that what ever they are doing is out of anger -- with all the negative connotations that go along with it.

When one shines a light on sex crimes in Jewish communities as brightly as I have for the last fifteen years, you would be surprised how many times various caring individuals have told me that I sound too angry.

I should not have been surprised by the number of community leaders who would invest a great deal of time, energy and money using propaganda and the Jewish news media in hopes of “demonizing” those of us passionate individuals who care enough to attempt to protect children and speak out in behalf of adult survivors.

When I started my own personal spiritual quest in the male dominated, orthodox Jewish world fifteen years ago –– and then created The Awareness Center, I had not thought about the fact as a woman I was expected to posses qualities in which women were to be seen as vulnerable, passive, incompetent, unable to make decisions for themselves without consulting with their husband or rabbi first –– let alone be child like. It was as if I was in a time warp –– going back to the early days of the suffragist movement. So many believed that outspoken women were nothing more then neurotic victims of penis envy. Let alone frustrated that they were not men that they would want nothing more then to destroy all male dominated practices in an act of bitter revenge.

For some strange reason my beliefs clashed with the orthodox world. I believe everyone should be educated consumers, I believe that children have the right to grow up in safe homes and communities. I believe that those who have been harmed have a civil right to speak out and find ways to heal, and that those who offend or cover up sex crimes should be criminally charged. I don’t care if I am a woman or a man speaking out. Each and everyone of us have free will and should use our G-d given abilities to speak the truth and be heard and believed.

Next View the slideshow

Suggested by the author