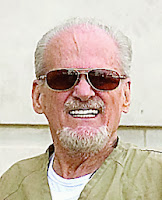 On July 24, 2009, Tony Alamo was convicted 10 counts of interstate transportation of minors in connection with the human trafficking industry.  On November 13, 2009, he was sentenced to 175 years in prison.  He is currently incarcerated at a federal penitentiary in Tucson, AZ.

There are several people who go by the name of Bernie Hoffman and Tony Alamo. The individual on this page was born in Joplin, MO on September 20, 1934.  As a child he moved with his family to Helena, MT.  In the 1960s Bernie Hoffman legally changed his name to Tony Alamo and it was around that same time he converted to Christianity.

Federal agents and state police had raided Alamo's Arkansas compound on Saturday and removed six girls from the home. After police and social workers interviewed the girls this week, prosecutors sought Alamo's arrest. FBI spokesman Steve Frazier in Little Rock would not disclose what the children said.

Frazier said Alamo was staying at the Little America Hotel in Flagstaff, Ariz., when arrested. The evangelist — who began his career as a California street preacher in 1966 — was scheduled for a federal court appearance Friday in Flagstaff.

"He has to have an initial apperance before I can say a whole lot," Frazier said. He said he did not believe children were with Alamo at the time of the arrest.

Agents arrested Alamo on charges that he violated the Mann Act, which prohibits transporting children across state lines for illegal purposes. Frazier described the illegal purposes as "sexual activity."

The Southern Poverty Law Center, which tracks hate groups, describes the Tony Alamo Christian Ministries as a cult, as do many of the church's former members. As a group, Alamo's church despises homosexuals, Roman Catholics and the government; Alamo has preached that girls are fit for marriage once they are sexually mature.

"Consent is puberty," he said in an interview with The Associated Press last week while agents raided his compound at Fouke.

The Little America Hotel, in Arizona's northern mountains near the Grand Canyon, bills itself as a luxury resort. Fred Reese, a spokesman for the hotel, declined to comment and referred all questions to the FBI.

An Arkansas judge has hearings set for Friday and Monday on whether the state Department of Human Services can maintain custody of the six girls taken from the compound during the state and federal raid. The girls will attend the hearings.

"We will transport them to and from hearings. We will take part in any future hearings," DHS spokeswoman Julie Munsell said. "Our job right now is to basically take care of them."

Circuit Judge Jim Hudson said two hearings would be conducted Friday and the other four are set for Monday in Texarkana. The girls, ranging in age from 10 to 17, all have been identified through police investigation and birth certificates, state officials said.

Neither Hudson nor Munsell would disclose what the girls told investigators or state aid workers.

State and federal agents raided Alamo's Fouke compound Saturday night, searching for evidence that children there had been molested or filmed having sex.

The six hearings will be split among three circuit judges serving Miller County. Judges will decide whether the state had enough evidence to warrant temporarily removing the children from their homes. If a judge rules against the state, the girls would be returned to her parents.

Hudson said all hearings, testimony and documents will be sealed because the cases involve juveniles — though he said he would announce a summary of his actions without naming the children.
According to Frazier, FBI agents and local and state police in Arizona arrested Alamo as he was leaving the hotel, which is located along cross-country Interstate 40. When the AP interviewed him Saturday and Monday, Alamo called from telephone numbers registered in the Los Angeles area.

Frazier said it wasn't known where Alamo was headed when he was picked up.

Alamo and his late wife Susan were street preachers along Hollywood's Sunset Strip before forming a commune near Saugus, Calif. Susan Alamo died of cancer in 1982; Alamo claimed she would be resurrected and kept her body on display for six months while their followers prayed.

Alamo was convicted of tax-related charges in 1994 after the IRS said he owed the government $7.9 million. He served four years in prison.

Prosecutors in the tax case argued before sentencing that Alamo was a flight risk and a polygamist who preyed on married women and girls in his congregation.

Since establishing his ministries in Arkansas, Alamo has been both a controversial and flamboyant figure in the state. Snapshots often show Alamo wearing large dark sunglasses, as he recently said he's become legally blind as he's aged.

In his autobiography, "My Life," former President Clinton described Alamo as ""Roy Orbison on speed."

Clinton recalled traveling to Alma in 1975 to see Dolly Parton sing at Alamo's compound, when Alamo's wife Susan was still alive. Remembering the fiasco after Susan Alamo's death, Clinton wrote: "A couple of years later, he (Alamo) got involved with a younger woman. Lo and behold, God spoke to him again and told him Susan wasn't coming back after all, so he took her out of the glass box and buried her."

FBI documents identified Alamo by his birth name, Bernie Lazar Hoffman, who turned 74 the day of the raid. Alamo has said he was born a Jew but converted to Christianity.