It is not appropriate for any rabbi, educator, agency or organization to investigate allegations of sexual abuse, especially regarding this convicted sex offender. Criminal investigations should only be conducted by trained law enforcement officials.  According to the terms of Rabbi Aryeh Blaut's probation he is not allowed contact with anyone under the age of 18 (except his own children).  He is also barred from using the internet.
If anyone who has suspicions, questions or information regarding this case contact:
Peggy Kellow Senior U.S. Probation Officer
Sex Offender Specialist
Phone: 206-370-8577      Fax: 206-370-8551
Rabbi Aryeh Blaut is convicted sex offender on federal charges of possession of child pornography.
According to the United States Department of Probation, Louis Blaut is not allowed contact with anyone under the age of eighteen on the Internet or in person. Meaning, Rabbi Aryeh Blaut is not allowed to tutor or teach anyone under the age of 18. He is also not allowed to use the Internet.
Rabbi Blaut is a past principal of a Jewish Day School in Seattle, WA. He was originally arrested in November 2003 for possession of child pornography.  He pled guilty in July, 2004 and sentenced on Sept. 24, 2004.  Rabbi Blaut spent 21 months in a federal prison in New Jersey.

There was no press coverage on this case, yet a reliable source stated that 1800 individuals in the community received a letter.

It is with profound sadness and difficulty that I am writing you today. I regret having to provide you with this distressing news, but after much discussion with rabbis, key members of our Board of Trustees and outside experts, we determined that it was important to tell you of this situation. Earlier this summer, Rabbi Aryeh Blaut pled guilty to charges of possession of child pornography, and on Friday, September 24, he was sentenced to prison.

For those of you who do not know Rabbi Blaut, he served as a member of our faculty for over twelve years teaching Judaic studies to our students. Rabbi Blaut also served as a full- or part-time administrator during some of those years.

Here are the facts from the Seattle Hebrew Academy's perspective:
Based on our experiences over this period, we have decided to take the following two actions.
I recognize that this is a very difficult topic to discuss. Based on all of the consultation with professionals familiar with situations such as this one, we have learned a great deal. One critical point is that it is often helpful for parents to discuss this situation with their children in a sensitive and instructive parental manner. We encourage you to share whatever information you believe is appropriate with your children; particularly those children who were students of Rabbi Blaut.

Please understand that we have been advised by halachic authorities that our decision to share this information with you does not constitute lashon hara (gossiping) under these circumstances. However, discussing this matter without a toelet (constructive purpose)would constitute lashon hara and is particularly insensitive to the Blaut family, who will continue to live within our community during this difficult period. For the sake of the family and their children, I urge you not to speak about this with anyone unless it falls under the category of toelet (constructive purpose)

This is more than a personal, disappointing tragedy. It is a matter of deep concern to the leadership of Seattle Hebrew Academy. Our primary focus is on our children. Our school counselor, Katie May is familiar with this issue. You may contact her if you need help in finding the appropriate way of talking with your children about this subject or if you feel that one of your children would benefit from time with her. You can reach her at 206-323-5750, ext. 246.

I am also always available to talk to you about this issue or any matter of concern. Please know that you can call me directly at 206-323-5750, ext. 201, or email me at skay@sha613.org. I look forward to working together with you in building our school community in the future.

Anonymous E-mail #1
Despite the fact that one of our local teachers, a rabbi, just spent 2 years in Federal Prison for on-line viewing of child pornography. This rabbi teacher was 'approved' by Torah U'mesorah too!  He was active in their e-chinuch program. Needless to say, there are quite a few families who will never send their kids to any Kollel activity because of this lack of oversight.

Rabbi Louis ‘Aryeh’ Blaut – President
Rabbi Blaut has first-hand experience with the challenges faced by prisoners and their families. Through serving a prison sentence, then probation and engaging in extensive therapy, this Jewish educator successfully navigated the road to redemption and reintegration into our community. Much of his time is now dedicated to teaching in-prison classes on Judaism, counseling prisoners and releasees, and helping their families get through the difficult dynamics of justice and corrections systems. In short, Rabbi Blaut is ideal to serve as president of our unique congregation. 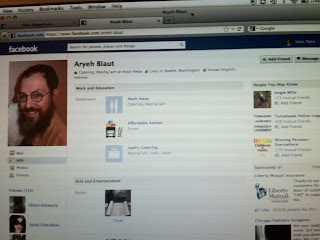 Once again a convicted sex offender found his way onto Facebook (FB). This time the offender is Rabbi Aryeh Blaut’s, who plead guilty to charges of possession of child pornography back in 2004, and spent two years in a federal prison. What’s concerning is the fact that several of Rabbi Blaut’s FB friends appear to be high school and college aged students from around the globe.

The truth is that it is nearly impossible forFacebook to insure that their social media site is sex offenders free, even though their policyis in place. There is no realistic way to keep convicted sex offenders off. The pattern tends to be that as soon as a convicted sex offenders account is closed –– they wait a few days and then open up another one using a different identity. What complicates matters even more is the fact that Rabbi Blaut’s name does NOT appear on the National Sex Offender’s registry, making it nearly impossible to protect unsuspecting children from him. The same thing has happened with the case of Rabbi Michael Ozair. His name was removed from the California registry when he relocated to Thailand.

Over the years Rabbi Blaut has used various names which include Louis Blaut, Louis Steven Blaut, Louis A. Blaut and Louis S. Blaut.

The story of Rabbi Aryeh Blaut is not unlike may other sexual predators that come from the ultra-orthodox Jewish community, instead of working directly with law enforcement officials, and notifying parents immediately, the school conducted their own internal investigation and waiting nearly a year to warn parents of the dangers.

At the time of Rabbi Blaut’s arrest he was both a teacher and principal at the Seattle Hebrew Academy. According to Blaut’s current Facebook page he is employed as a Mashgiach (koshering supervisor) for two catering companies, and also as a driver for a kosher store. What is unknown is what sort of safety plan the community had to ensure that Aryeh Blaut has no contact with children, an that parents are aware of the dangers. 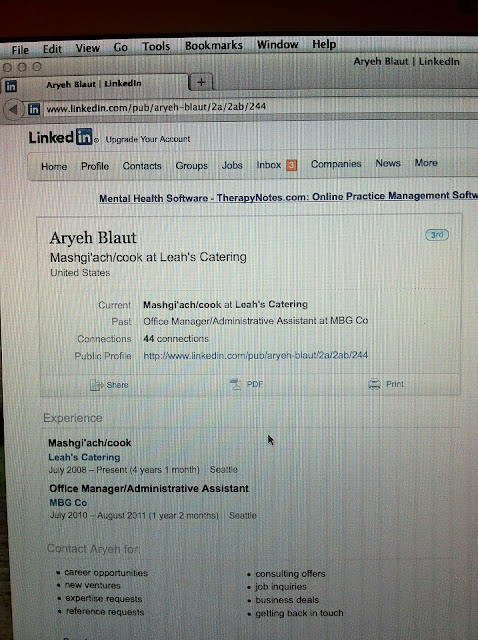