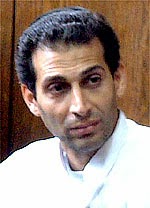 Tel Aviv Municipal Court sentenced Avi Rodef-Shalom, 35, to just four and a half years of jail time on Thursday for raping and sexually abusing a six-and-a-half year old girl.

The Tel Aviv resident admitted to putting his fingers in the girl's sexual organ.

Prosecutor Dafna Vachnish requested a four-and-a-half year jail sentence for Rodef-Shalom, while defense attorney Roni Sharabi called on the judges to sentence his client to just one year for his crimes.
According to documents filed with the court, Rodef-Shalom was admitted to a psychiatric hospital at the age of 17 due to his psychotic condition. He was not drafted into the Israel Defense Forces for this reason.

Judges Savyona Rotlevy, Avraham Tal and Ofra Solomon Cherniak made clear that the sentence handed down to Rodef-Shalom does not reflect the policy for sentencing individuals for crimes such as the ones he committed.

Tel Aviv District Court yesterday jailed Avi Rodef-Shalom, 35, for four and a half years for raping and sexually abusing a six and a half year old girl. Rodef-Shalom admitted his guilt in a plea bargain. Prosecuting attorney Dafna Wachnish asked for the agreed sentence, while the accused's attorney, Roni Sharabi, asked for one year. The court was told Rodef-Shalom, 35, was put in a psychiatric hospital when he was 17, and as a result the army did not draft him. Judges Saviona Rotlevi, Avraham Tal and Ofra Salomon Czerniak said the confession and mental health of the accused won him some leniency. The sentence did not reflect normal sentencing policy for such an offense, they added.