April 24, 2014 –– Rabbi Yaakov Murray (AKA: Jordan Murray) was found guilty on two counts of communicating with a minor for immoral purposes.  He was sentenced to prison for 364 days on each of the two counts.  He will then serve 36 months of probation under the supervision of the Washington State Department of Corrections.  Murray was also ordered by the judge to pay restitution and court costs.  He will also undergo a sexual deviancy evaluation and follow all recommendations.  He was also ordered to have no contact with either of his two victims or any other minors until he completed the sexual deviancy evaluation.

Additional conditions of his probation include that he may be transferred to Minnesota on condition that Murray remain on electronic home detention until his evaluation is completed and treatment if recommended has begun.

A private school teacher in Seattle has been charged with four counts of child molestation after two students said he groped them during class, according to the King County Prosecuting Attorney's Office.

Murray, also known as Rabbi Yaakov Murray, has taught first and second grade at Torah Day School since the beginning of the 2011 school year, according to charging documents.
He was arrested after the Seattle Police Department was notified by Child Protective Services of the alleged abuse.

The 6-year-old victim told investigators Murray put her on his lap and "has put his hands down her pants" and shirt on multiple occasions. She said other students were in the room at the time, but said Murray's desk blocked their view.

The 7-year-old victim said Murray touched her while she was standing at his desk. Other students were in the classroom when the abuse occurred, according to the documents.
"She stated the touching always occurred in class," the documents read. "Other children were present but they couldn't see because of Murray's desk. Murray does the same thing every time."

Prosecutors say the victims reported the abuse to one of their sisters, who works as a receptionist at the school.

A former teacher at a Seattle private religious school has been charged with four counts of first-degree child molestation, accused of sexually touching two of his young students during classes when other children were present. 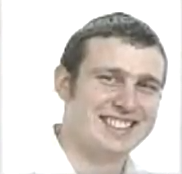 A former teacher at a Seattle private school was charged this week with four counts of first-degree child molestation for allegedly touching two of his students during classes when other children were present, according to King County prosecutors.

Jordan Eareckson Murray — who went by the honorary title of “Rabbi Yaakov Murray” at the Torah Day School in Columbia City — was arrested May 3 and spent less than 48 hours in the King County Jail before posting a $100,000 bond, according to jail and court records.
Murray, 32, a married father of three, does not have a criminal history, said Dan Donohoe, spokesman for King County Prosecutor Dan Satterberg.

Formal charges were filed Tuesday, accusing Murray of touching the girls under their clothes numerous times since the middle of the school year. Other students in Murray’s first- and second-grade classes were apparently unaware of the behavior because Murray’s desk blocked their view, charging papers say.
The two alleged victims, a 6- and 7-year-old, were playing together at the younger girl’s house and told the girl’s 12-year-old sister — who is also a student at the school — that “Rabbi Murray puts his hands in their pants,” charging papers say. The girls “were scared” and confused and didn’t know why it was happening, the papers say.
The sister brought the girls to her mother, and they disclosed the alleged abuse, according to the charges.
The 12-year-old had baby-sat Murray’s children in the past, the papers say.
Another 6-year-old also described sitting on Murray’s lap or standing between his legs, and said other girls in her class also sat on his lap, according to the charging papers. The girl said Murray often hugged her from behind and touched her over her clothing, the papers say.
The two alleged victims and at least four other students in Murray’s classes, all ages 6 and 7, routinely complained of anxiety, headaches and stomach aches, but the girls’ parents said the children were fine and acted normally after being sent home early, the papers say.
The Seattle Police Department received two referrals from Child Protective Services on April 23 and launched an investigation, the papers say.
Murray, who has since been fired by the school, declined to provide a statement to police, charging papers say.

“The defendant is a clear danger to children given the circumstances of this crime where he abused his position of trust as a first- and second-grade teacher, secretly molesting these girls in class in front of others,” Senior Deputy Prosecutor Carol Spoor wrote in the charging documents.
Murray is scheduled to be arraigned May 20.

King County prosecutors say the 32-year-old is accused of sexually touching two of his young students during classes when other children were present.

A spokesman for King County Prosecutor Dan Satterberg says Murray is a married father of three and does not have a criminal history.

Formal charges were filed Tuesday. He is scheduled to be arraigned May 20.

A Seattle grade school teacher accused of sexually assaulting two girls in front of other students has been charged with child molestation.

“The defendant is a clear danger to children given the circumstances of this crime,” Spoor told the court. “He abused his position of trust as a firs-t and second-grade teacher, secretly molesting these girls in class in front of others.”
Seattle police responded to the South Ferdinand Street school after they were notified of the allegations on April 23.
Speaking with investigators, a 6-year-old girl said Murray put her on his lap and shoved his hands down her pants while he was seated behind his desk, Seattle Detective Michael Moore told the court. The girl had approached Murray to show him her school work.
As he did so, Murray stared at the girls school work as though he was reading it, Moore continued. The detective added that the rest of the first-grade class was unaware Murray was groping the child.

Moore went on to claim Murray molested the girl behind his desk on several other occasions. The girl’s family notified authorities after she reported the apparent abuse.

A 7-year-old girl made similar allegations against Murray, claiming he molested her several times in recent weeks, Moore continued. Like the other girl, she said Murray molested her behind his desk in the classroom.

A third girl said Murray often hugged her and lifted her onto his lap at his desk at his desk. He is not alleged to have molested that girl, though investigators suggest he touched the girl over her clothing.

Murray declined to speak with investigators, according to charging papers.

Investigators note Murray is not actually an ordained rabbi; students at the school called him by that title out of respect. He has no criminal history.

Murray has been charged with four counts of first-degree child molestation. He was briefly jailed on May 3 but was released after posting bond on $100,000 bail.

CORRECTION: An earlier version of this story contained allegations that Murray was previously convicted of crimes outside Washington state. Those inaccurate allegation were wrongly included in charging papers. Murray has no criminal history.

A Seattle elementary school teacher has been charged with four counts of child molestation after two female students reported that he sexually assaulted them in front of the class.


Jordan E. Murray, 32, was teaching first and second graders when he allegedly groped the girls in class at the private religious school.


The two girls reported that they were touched sexually by their teacher, who was called Rabbi Yaakov Murray at the school.


A 6-year-old student told detectives that Murray put her on his lap and put his hand down her pants on more than one occasion. He was seated behind his desk and looked over her work, which she had brought up to show him, while touching her. The student also said he put his hand under her shirt on one occasion.


The second student, a 7-year-old, said that Murray touched her while she stood at his desk. She had Murray as a teacher the previous year, but told investigators he hadn't touched her until this year.


Murray was released on $100,000 bail and could face at least 25 years in prison if convicted. Prosecutors say Murray is considered a clear danger to children because of the circumstances of these crimes.

Murray has lived in Washington state for less than two years.


A spokesperson for the prosecutors office clarified that Murray does not have any out-of-state convictions. They had previously said he was convicted of a domestic violence charge in New Hampshire in 2007. 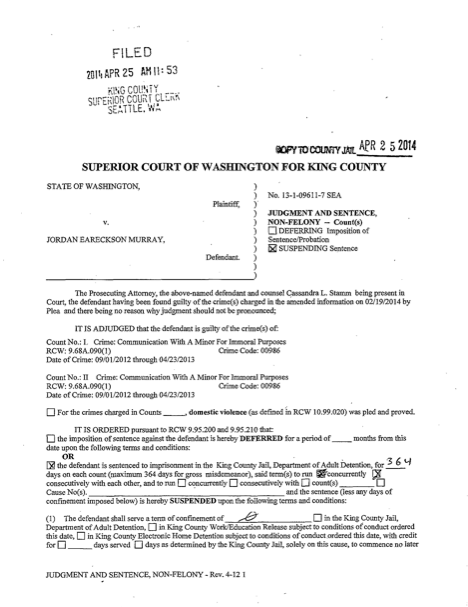 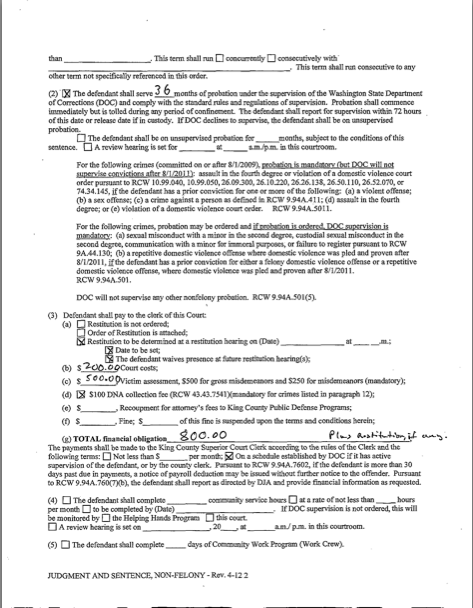 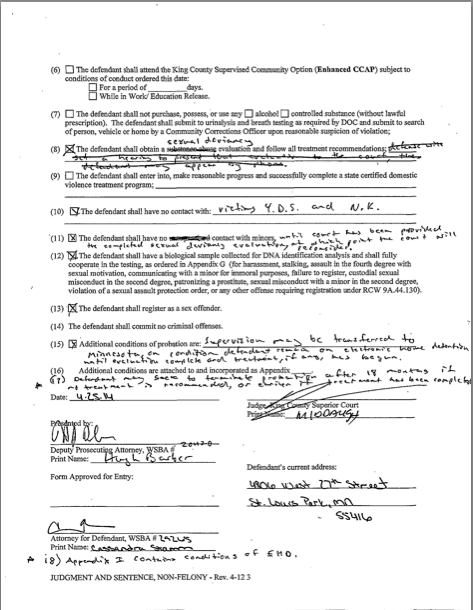 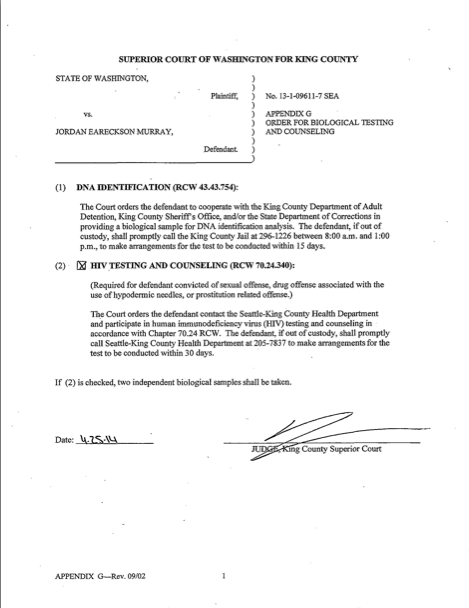 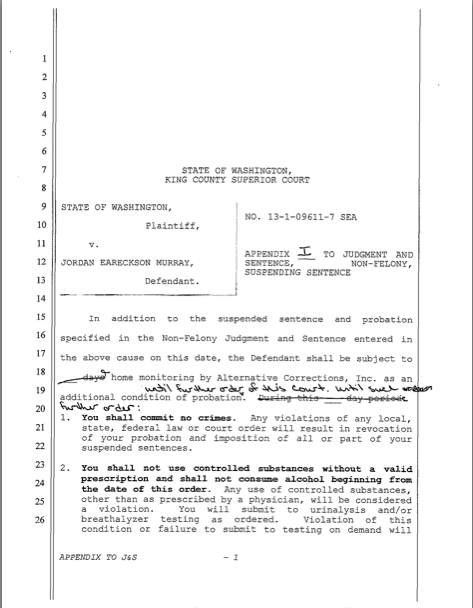 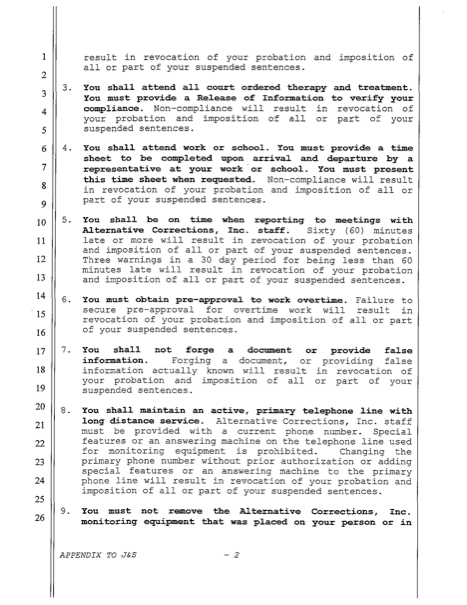 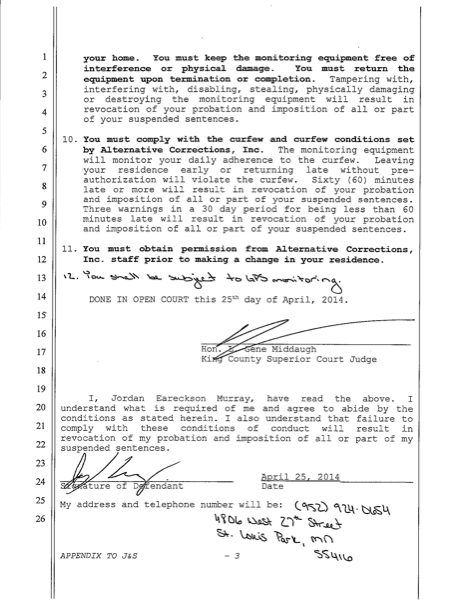 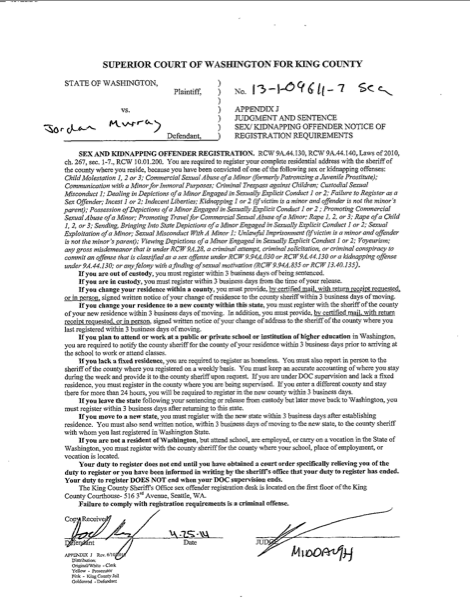 
FAIR USE NOTICE
Some of the information on The Awareness Center's web pages may contain copyrighted material the use of which has not always been specifically authorized by the copyright owner. We are making such material available in our efforts to advance understanding of environmental, political, human rights, economic, democracy, scientific, and social justice issues, etc.