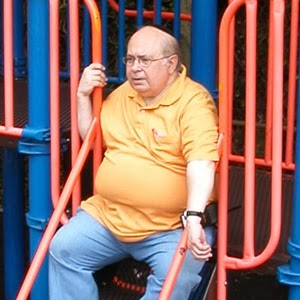 This head counselor — perched comfortably on a child’s playset in a photo posted on a Brooklyn day camp’s Web site — was named by prosecutors yesterday as a sexual deviant.
Joseph Passof, a retired New York City schoolteacher known by the nickname “Uncle Joe,” is accused of molesting a 5-year-old boy in a bathroom last summer, authorities said.
The counselor was slapped with a slew of sex-abuse charges for the heinous July assault, in which he allegedly sneaked up behind his young victim and attacked him in front of a 4-year-old camper.
“That’s Uncle Joe, bad person,” the young witness told investigators when he was shown a photograph of Passof, police sources said.
The 65-year-old, who spent 36 years on staff at the Flatbush Park Jewish Center Day Camp, was arrested Wednesday and pleaded not guilty yesterday.
A camp photo (pictured) shows the tubby teacher surrounded by child playthings and a pile of kids’ clothes. Camp director Kevin Adelson didn’t return calls and e-mails for comment.
Passof’s defense lawyer, Jay Cohen, said Passof is impotent because of high blood pressure and diabetes.
Cohen said the accusation was fabricated by the mother of the witness, who had been chastised by Passof and another counselor.
Cohen said Passof had actually walked in on the two boys in the bathroom “experimenting” with their pants down.
Passof, who plans to testify before a grand jury, says he only yelled at them to pull their pants up and denied any abuse, according to Cohen.
Passof appears prominently on the Web site of Flatbush Park Jewish Center Day Camp, which costs $3,000 for eight weeks and accepts kids from ages 4 to 14.
There are pictures of a portly-looking Passof sitting on a child’s jungle gym and another section touts his skills in preparing fish sticks for the campers.
He was ordered held on $50,000 bail or bond.
Passof taught at city schools, including PS 99 Isaac Asimov School for Science and Literature in Midwood, Brooklyn, from 1984 until his retirement in 2003.
The Department of Education said he had no disciplinary history.
_________________________________________________________________________________

Both the DA's office and rabbinical leaders deny there is a deal. Both insist they are doing all in their power to solve the problem.


But in recent months, the leaders of Agudath Israel of America, an umbrella body for Brooklyn's ultra-Orthodox Jews, has clarified its position on reporting abuse to the police. To avoid the ancient prohibition against mesirah – the act of handing over a fellow Jew to secular authorities – Agudath directs its members to consult with a rabbi first, before calling children's services.
The rabbi must establish whether the suspicions are weighty enough to justify a report. "A person can be destroyed if allegations which are baseless are raised against him," said Agudath's executive vice-president, Rabbi David Zwiebel.
While some observers are encouraged that Agudath is now at least recognising secular justice, others are horrified. "This is the latest outrage from Agudath Israel," said Eliot Pasik, a lawyer who has represented Orthodox abuse victims, including those of Yehuda Kolko. "In the name of maintaining what they think is the best image possible, they've become ideological fanatics."
There are some signs of a growing schism within the rabbinic leadership – including inside Agudath – even if most critics are still afraid to speak up. In a significant move last summer, the Crown Heights Beit Din declared it will no longer handle child sex abuse cases, which it said must be taken to the secular authorities.
But progress, say advocates, is far slower than the official picture suggests.
Last November, the Jewish radio show Talkline held a heated debate on child sexual abuse. Zvi Gluck, a community mediator who helps other ultra-Orthodox Jews in trouble with the law, rang in to say the DA's arrest figure was "not a real number". Gluck said he knew most of those arrests, "and most of those, because of pressure within the community, were dropped and resulted in nothing happening".
Gluck added he knew of at least three abused children who had committed suicide in recent months. "As Frum Yidden [observant Jews] we have an obligation to protect our community and our children. We are making progress but they are small steps and we are nowhere near where we need to be."
_________________________________________________________________________________