Could TSA workers be charged with sexual assault? 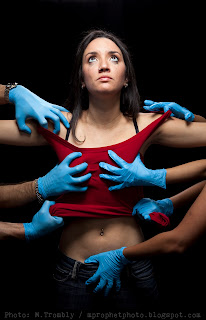 Over the last few weeks we’ve been hearing accusations that several TSA workers have been crossing that narrow line between an ethical pat-down and sexual assault against travelers in airports across the United States.
Steve Wagstaffe, who is the incoming Chief Deputy DA of San Mateo said in a press release that his office “would prosecute TSA employees who engage in lewd and lascivious behavior while conducting Homeland Security mandated pat downs at the San Francisco International Airport in San Mateo County.”
Wagstaffe stated “Any traveler who believes the TSA pat down has crossed into the widely reported groping of "sensitive" personal areas should take note of the TSA staffer's name and badge. The traveler should immediately contact a uniformed state or city police officer found at all screening areas to start an investigation. Additionally, the local district attorney's office should be called if a monitor is not in site.”
It has been suggested by various rape crisis centers across the United States that travelers in other jurisdictions also report these incidences to their local state and city police, in hopes that criminal charges can be brought up against alleged offenders.
According to every state in our country, and also under federal law --  it is illegal for an individual to grab, grope or touch our bodies without the explicit permission from the person being touched.  It is also a sexual assault if the individual being touched grants permission under duress.  These are crimes that often mandate a prison sentence. Unfortunately, we all must keep in mind that TSA workers are human beings and some might have transgress that fine line.
If you or someone you know has disclosed what could be described as a sexual assault, contact your local rape crisis center for help. They can also assist you in making police reports, offer you counseling and navigate you through the legal system.
To find a listing of rape crisis center’s in your area click here.


Vicki Polin  is a Licensed Clinical Professional Counselor and the founder and director of The Awareness Center, Inc., which is the international Jewish Coalition Against Sexual Abuse/Assault
Posted by Vicki Polin at 11/25/2010 10:17:00 AM