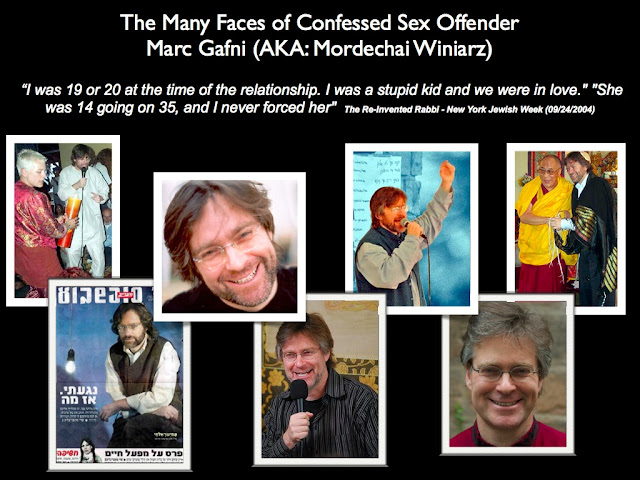 As many of you are aware, "Rabbi" Marc Gafni (Mordechai Gafni) confessed to sexually assaulting teenage girls in the United States and of clergy sexual abuse of adult women in Israel.  His criminal behavior has always escaped prosecution by him bouncing around from one state to the next and by going to and from Israel.   Over the years The Awareness Center has done what we could to expose his violations in hopes of preventing one more person from becoming his victim.  He currently resides in California and is about to become a father once again.  We have heard rumors of him being wed to his forth or fifth wife.

Today, The Awareness Center learned of an article that was published in the Huffington Post in which Marc Gafni is being promoted by Mariana Caplan, PhD, who is an author and a psychotherapist specializing in spiritual issues.  You can read her article here

Please contact the Huffington Post and let them know that their article is promoting a confessed sex offender at: scoop@huffingtonpost.com

The Awareness Center is closed. We operated for fifteen years (April 30, 1999 - April 30, 2014). The information on this site is being provide for educational and historical purposes only.