I have a cousin who is deaf who got involved with (the cult like group) Jews for Jesus when she was a teenager. 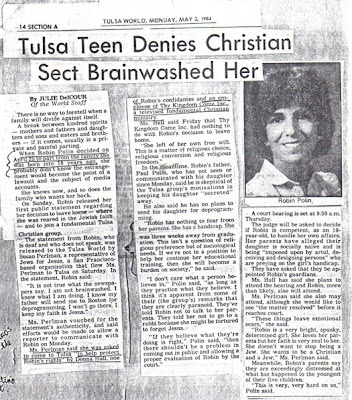 My cousin grew up in Oklahoma, and I grew up in Illinois. Because of the miles between us, I barely knew her as a child. As adults we developed a friendship do to the connection we made using the internet and AOL.


About 13 years ago I wanted to learn as much as I could about Judaism, to help my cousin.

During these early years of my own learning, I volunteered time on line as a counter-missionary in Jewish chat rooms on AOL and was also a JCOMM (in AOL's Jewish Community online). Doing this type of volunteer work is what eventually lead to me going to Neve Yerushalayim (a women's yeshiva in Jerusalem) and eventually lead me to creating The Awareness Center.

At one point a rabbi involved in the counter-missionary movement donated an Art Scroll Chumash to me to give to my cousin –– in hopes of helping her learn. At the time I was told that my cousin would most likely not take the book, without the approval of Martin (Moishe) Rosen –– who was a close friend of hers. Around that same time my cousin told me that Rosen was going to be in the Chicagoland area for a high school graduation of one of his granddaughters. She told me he wanted to meet me, and asked me if I would agree. So I did.

During the 2 1/2 hour meeting (at an upscale hotel in Skokie), Martin Rosen went on and on about how he started Jews for Jesus. He told me that it was originally an idea he had for a project for a marketing class he was taking back in the late 1950's. He told me that he had no idea that his idea would take off the way it did. When I asked him about the Chumash, he told me it was "treif", and did not want to encourage my cousin to read it. When I offered it to my cousin she took it.

As the months went on, my cousin began disclosing her own child abuse (over the years she's became public with her history, which can be found on the internet). As she began to disclose her past, I started to discontinue trying to persuade her to rethink her religious beliefs.

As survivors we all need to realize that we need to find things to help us heal. Though her views are different then mine, she deserves the right to choose what is helpful to her –– to make it through the day. She needed to find her own answers to make sense of the insanity she grew up with. I honor and respect my cousin for being able to survive and to grow into the beautiful person she has become.

What I do want to say is that it saddens me a great deal to know that one of the major things that pushed my cousin over the edge -- of not wanting to learn about "real" Judaism, came from the hands of a few Torah observant Jews in NYC. I say this because Martin Rosen was pretty smart. He set her up.

Martin Rosen knew that if his people would send her to various locations in both Manhattan and Brooklyn, that he could count on the fact that orthodox Jews would spit at her and use possible physical force against her, when they saw the literature she would handout regarding his organization. You have to understand, my cousin was in her late teens - early adulthood. She knew nothing about Judaism when she was sent by Jews for Jesus to New York to prothelytize. All she knew was how Rosen would demonize those from the Torah observant world. She was basically told that only "completed" Jews behaved civilly. Handing out his literature would prove his point. Besides being very young and deaf, my cousin is under five feet tall. Can you imagine how scared she must have been when her own people attacked her?

Moishe Rosen, who died Wednesday at age 78 was founder of Jews for Jesus, an organization bent on converting Jews to Christianity.

A Christian convert from Judaism who became a Baptist minister, Mr. Rosen insisted that Jews could keep their cultural identity while accepting a new religion. But Jews for Jesus became a lightning rod for criticism. Many Jews resented the attention and declared the idea of a "Jewish Christian" to be an oxymoron. Many in the public thought the group's swarms of young evangelists clad in identical T-shirts, encountered in airports or on street corners, were cult members.


Undaunted by critics, Mr. Rosen kept up a cheerful front while building an organization that today claims to have a presence in 22 cities in 11 countries.


"God has a great sense of humor letting an over-aged, overweight and overbearing person like me lead a youth movement," Mr. Rosen once said.


Mr. Rosen encouraged his converts to keep their traditions by converting Passover into a Christian holiday and the Bar Mitzvah into a Christian coming-of-age ceremony. He wrote tracts with titles such as "Jesus Made Me Kosher;" a band called "Liberated Wailing Wall" used to play at the organization's events.


Raised in an orthodox household in Denver, Colo., Mr. Rosen was the son of a scrap-metal dealer. He converted at age 21 to evangelical Christianity and his parents disowned him.He attended a seminary in New Jersey and was ordained a Baptist minister in 1957.


The same year, he joined the American Board of Missions to the Jews, an evangelical organization, which eventually put him in charge of its mission in San Francisco. Although he professed a conservative faith that included biblical inerrancy and premillenialism—the idea that Jesus will be returning soon—Mr. Rosen came to favor a form of outreach more suited to the 1960s San Francisco youth scene.


When the mission board became uncomfortable with him, Mr. Rosen in 1973 founded his own organization, Jews for Jesus, with its headquarters in San Francisco's Haight-Ashbury district.


"When I came out here, the people doing the best communicating were the anti-war activists," Mr. Rosen told the San Francisco Chronicle in 1996.


Emulating them, he began distributing homemade tracts illustrated with his own scratchy drawings. His first pamphlet was titled "A Message from Squares," using the slang for someone uncool.


Mr. Rosen was an effective preacher, and given to pithy sayings such as "An atheist who is looking for God is like a hooky player looking for a truant officer" or "My boss is a Jewish carpenter." He could also be blunt. "Jewishness never saved anybody," he wrote in a statement on the Jews for Jesus website.


At the same time, he sought to assure Jews that they were not betraying their culture by embracing Jesus—something many Jewish leaders rejected. " 'Jews for Jesus' are dishonest. They are hypocrites," write Elie Wiesel, the Holocaust survivor and Jewish commentator, in a 1988 essay. "They do not even have the courage to declare frankly that they have decided to repudiate their people and its memories."


The group grew quickly, but so did the controversies it generated. Mr. Rosen sometimes welcomed the publicity garnered by its various legal scrapes. He was a fan of Saul Alinsky's book "Rules for Radicals," and he boasted to the Washington Post of having been arrested in seven different airports and "clubbed, manacled, and thrown down a staircase" for his efforts.
"When Moishe Rosen came into a city there was either a revival or a riot," said Vernon Grounds, president emeritus of the Denver Conservative Baptist Seminary, in a statement.
Jews for Jesus began evangelizing Jews in Israel, in the former Soviet Union, and also Russian immigrants to the U.S.
The group won't say how many people it has converted, but a spokesman estimated that it has had "hundreds of thousands" of conversations with potential converts. Converts are normally referred to evangelical churches within their own communities, much like those garnered in Billy Graham's crusades.
Mr. Rosen retired as executive director of Jews for Jesus in 1996. In a final farewell posted after his death his organization's website he cited a New Testament verse about how no man knows what Heaven is like.
"I have a big curiosity, and now I know," Mr. Rosen wrote.
_________________________________________________________________________________