The Council of the District of Columbia Committee on Public Safety and the Judiciary - Public Hearing B17-146 - Childhood Sexual Abuse Prevention Act of 2007
Friday, June 1, 2007 - Noon
Washington DC

Pedophile has no religion. Those who perpetrate sexual offenses come in all shapes, sizes, colors, ages, sexes and religions -- as do the survivors of sex crimes.

We are here today because the current systems in our schools, institutions, organizations, churches, synagogues, mosques and temples do not work to protect our children. Instead our systems appear to be set up to protect the assets of the organizations and institutions, as well as the rights of those who offend; while ignoring the rights of those have been sexually victimized.

I’m sure you will hear testimony from those who represent the Catholic Archdiocese of Washington DC. Please remember that they do not represent the views of the Jewish community or that of any other faith group. They are here only to protect the assists of their establishment. The Archdiocese does not represent the best interests of citizens of the District.

The Awareness Center is the International Jewish Coalition Against Sexual Abuse/Assault. Our world headquarters is located in Baltimore, MD. We represent Jewish Survivors of sex crimes within every movement of Judaism (from the unaffiliated, Jewish Renewal, Reform, Conservative, through the Orthodox, "Charedi" and "Chasidic" communities).

The history of the Jewish People is one filled with a series of traumatic experiences; including one topic that up until now that has been taboo to discuss: Sexual Victimization (childhood sexual abuse, sexual assault, clergy sexual abuse, professional sexual misconduct and sexual harassment).

Contrary to what we might want to assume, sexual violence is not limited to the gentile population: it is also a Jewish issue and one that needs to be addressed. In the United States one out of every three to five women, and one out of every five to seven men have been sexually abused by the time they reach their eighteenth birthday. This includes Jewish communities within the District.

One of the major problems in discussing the issue of child sexual abuse within the Jewish community is that doing so threatens the cultural perception of the wholesomeness of the Jewish family.

The Bullying, Intimidation, Extortion Attempts that Jewish survivors and or their family members experience includes things such as: threats that their children will no longer be allowed in the Jewish day schools and or they will not be able to get good marriage partners (which is very important in orthodox circles). Parents who work within the Jewish community may have their jobs or businesses threatened. There have also been cases in which family members were excommunicated for going to law enforcement.

Recently the Baltimore Jewish Times wrote two articles about alleged serial child molester -- Rabbi Ephraim Shapiro, who had molested children for over fifty years. It’s difficult to understand, yet the rabbonim of Baltimore and the DC area still are trying to do what they can to keep the allegations quiet.

One example is the letter written by Rabbi Moshe Heinemann, which he posted in his Baltimore synagogue. Rabbi Heinemann runs a The Star K a kashering business, which is very much a part of the Washington DC Jewish community.

Heinemann’s letter basically banned his congregants and those who follow his rulings from purchasing the Baltimore Jewish Times or having the paper in their home. He was also attempting to set precedent world wide in the way cases of child sexual abuse are now being made public. Rabbi Moshe Heinemann is a very powerful and influential man in Baltimore, Washington DC and around the world.

Moshe Heinemann’s letter was an attempt to keep his followers from knowing the truth about an alleged sex offender and also about ways in keeping children safe from sexual predators.

Below you will find the letter. Some of the Hebrew in the letter translates to: "The verse in Mishlei 26:11, which states, 'As a dog returns to its vomit, so does a fool return to his folly,' see Ibn Ezra there." 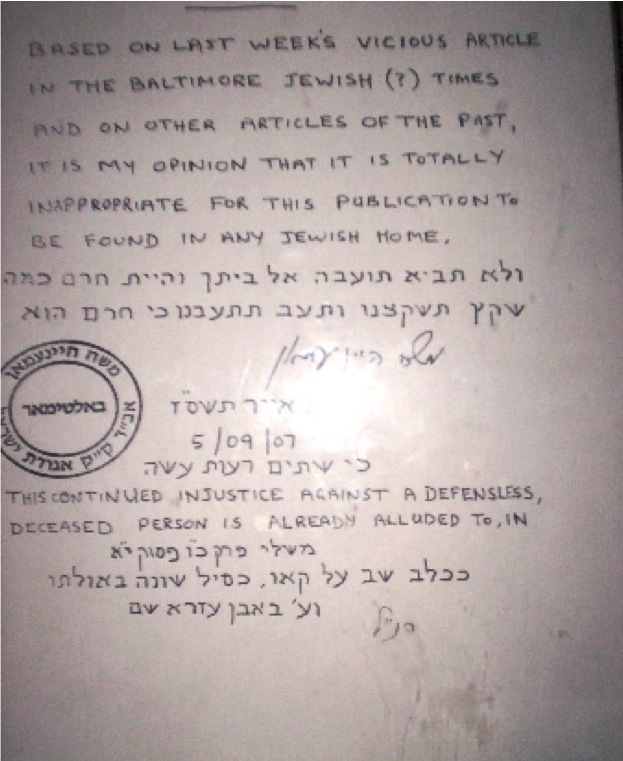 The tradition in handling sex crimes in Jewish communities has been to handle allegations quietly and internally. In most cases no police or hotline reports are made. Instead our rabbis attempt to handle “situations” on their own.

Unfortunately, our rabbis and community members are ill equipped. They do not have the education or training to in collecting evidence or conduct forensic interviews.

All too often the rights of offenders have been seen as greater importance then that of those who have been sexually victimized. It’s only been within the last few years that Jewish survivors in many communities have been seeking help. Most are not in a place emotionally or psychologically to file police reports, let alone file civil suits.

Due to the psychological trauma experienced by many survivors, they are unable to secure employment and end up living on public assistance and or social security disability. If survivors would be offered the opportunity to file civil suits and win, the burden of paying for psychotherapy would no longer be a burden of the citizens of the District, instead the burden would be on the offenders and those who enable the offenders to continue sexually violating our children.

Please give survivors of childhood sexual abuse a chance to have their voices heard and the opportunity to be compensated for their pain and suffering.