Out of the Darkness: The Story of Dr. Simonne Levi-Jameson

Out of the Darkness
By Lexi Landsman
Australia Jewish News - June 8, 2007

SHE was only 12, but she can still recall the rotten smell of the wood, the musty dry air, the dust, the perpetual darkness and the rats. 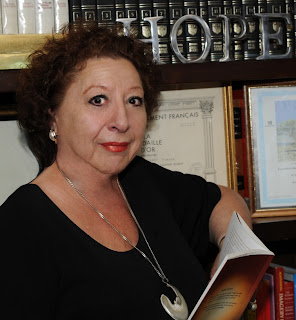 More than six decades later, Dr Simonne Jameson, who now lives in Melbourne, still cannot shake the memories of her three years living in hiding in an underground cellar of the National Library in Paris during the Holocaust.

She tries to forget about the daily rapes, the small food rations, the loneliness and the unwavering fear.
Instead, she focuses on the books, which she says “kept my sanity and gave me a refuge from reality”.

Dr Jameson’s parents chose her out of their three children to send into hiding, after a police commissioner convinced them that he would “protect” her.

Her parents fled with her younger brother and older sister to Bordeaux to escape deportation, leaving young Simonne behind.

Within days of hiding in the rat-infested cellar, the rapes by pedophile police began and continued daily for three years.

“I remember the books and the rats,” she recalls. “The books kept me alive. They gave me an escape from the pain and abuse, and gave me some hope and optimism.”

Dr Jameson says she always had a feeling that she would survive and so she found solace in the philosophical books, which were kept in the cellar. A particular favourite was Candide by French philosopher Voltaire, which she credits as helping her survive.

It was during those three years of living in captivity that Dr Jameson discovered her passion for psychotherapy, art and books.

Since then, Dr Jameson, now 79, has taken that passion and become a renowned psychotherapist, child psychologist, art critic, philanthropist and author.

She vowed from the moment she left the confines of the cellar that she would dedicate her life to helping children of abuse. And in 64 years, Dr Jameson has gone far beyond her word.

In 1981, she founded the Children’s Rights Foundation (CRF), which provides free therapeutic services to disadvantaged families, and later the Arts Sans Frontieres, an art gallery where all profits go towards helping abused children.

In 2003, she released a memoir of her experiences called Men or Rats. The book will be made into a Hollywood film later this year. Directed by Mark Medoff (producer of Children of a Lesser God and City of Joy), the film will star Thomas Haden Church, Anna Paquin and Alfred Molina. The role of Dr Jameson has yet to be cast.

“It’s good that people will be able to know that you can survive anything. I hope that the film will send a positive message.”

DR Jameson was born in 1928 in France in the annex of the National Library, where her father worked.
Twelve years later the place of her birth would become her prison.

“I had a very rich life before the war. I met lots of authors at the library and I was always a positive, trusting person. I was always optimistic,” she recalls.

Dr Jameson slept between two bookshelves in the library on a metal military bed. She was fed a small ration of bread and water each day. Some days she went without any food at all. The only human contact she had was with the French police officers who sexually abused her. And apart from the abuse, she was also fearful of the rats.

“The rats were very big and I feared that they would attack me one day but they never did. I think in some way, the rats adopted me as one of their own.”

In her first few months in the cellar, Dr Jameson became critically ill. She recalls overhearing a conversation between the officers discussing what they would do with her dead body.

“I never thought about escaping,” she explains. “One of the officers had shown me a bar of soap and he said that it was made of the fat from the Jews in Auschwitz. He told me I would become a bar of soap if I tried to leave. It haunted me.”

At one point, Dr Jameson considered giving up.

“I remember taking a piece of the mirror and thinking that I would cut my wrists, but something kept telling me that I would survive. So I didn’t.”

In the last six months of captivity, an elderly police officer was sent to feed her and started crying as soon as he found her. He let her out into the courtyard for the first time to get fresh air.

But, one week before she was freed, no-one came to feed her. She was starving and close to death.

When she was eventually freed in September 1944 by the elderly officer, Dr Jameson weighed 38 kilograms, had tuberculosis and couldn’t walk.

After being treated by a doctor and spending time in a sanatorium, she went back to the library where her father worked.

“I went back there with hope, and when I knocked on the door, it was my father who opened it. I couldn’t believe it. My family had been told that I had been deported. It was overwhelming to see them.”
Dr Jameson says that writing her book six decades after being freed was cathartic.

“I wrote my book at a time that I was not well I wanted it to be like a will that I would leave my children. It was very therapeutic.”
Last year, Dr Jameson went back to the cellar with the film crew who are expected to go into production later this year. She says she was shocked to find that nothing in the cellar had changed.

“I thought going back wouldn’t affect me after so many years. But it did and it brought back a lot of traumatic memories to see the books and the archives just as they had been. I stood there and I was 12 years old again.”

In her clinical life, Dr Jameson has developed an impressive curriculum vitae.

She studied psychoanalysis with Carl Jung, psychotherapy with Carl Rogers, psychology with Dr Jolande Jacobi and philosophy with Salvador Dali. She has diplomas in nutritional medicine, orthomolecular nutrition, clinical hypnosis, criminology and biofeedback.

She is a doctor of homeopathic medicine and alternative medicine. She’s studied the effects of alcoholism and drug addiction, as well as terminal illness, cancer therapy, meditation and palliative care.

She can speak five languages – French, Italian, English, Spanish and German. She’s won numerous awards, including the Gold Medal of France for services to humanity and was a nominee for Australian of the Year in 2006.

She’s currently the director of both the CRF and Arts Sans Frontieres and at 79, she shows little signs of slowing down.

She’s lived her life with a philosophy of forgiving and not forgetting, and focuses always on helping others move forward, instead of looking back.

“To be positive is the most important thing in life. If you don’t want to become sick yourself, you must forgive,” she explains. “If you hate people, you are not damaging them, you are damaging yourself. Forgiving and love are two very important parts of life.”

Later this month, she will give a series of talks in Sydney, Brisbane and Adelaide about her life and experiences with Carl Jung, Salvador Dali and Dr Jolande Jacobi. She will also hold an intimate all-day seminar in Sunbury, Victoria, next month.

She formed a special relationship with Dr Jacobi, a Jewish psychotherapist and founder of the Jung Institute, who Dr Jameson says got her through a difficult time.

“I learned a lot of psychology from Dr Jacobi, who was very compassionate woman and very similar to me. She was also a Jewish person who had suffered a lot. Without her I would not be who I am today.”

But Dr Jacobi was not only her tutor and therapist, she became her companion and fulfilled a maternal role.
“I had difficulty forgiving my mother for leaving me behind, but I did. I couldn’t understand why you would leave someone behind. I felt rejected by her and I felt accepted by Dr Jacobi. She changed my life in many ways.”

Dr Jameson now lives in Melbourne and has five children, one that she was counseling and later adopted, and seven grandchildren. She says that her family “have played the most important role in [her] life”.

“They brought a lot of love into my life. It’s like a boomerang – when you give love, that’s what you get in return.”

And despite all the trauma she’s suffered, Dr Jameson’s message is one of optimism and faith in humanity.
“I am a very positive person. I believe in forgiveness I believe in the human race. Life is too short not to look forward. Life is beautiful, it’s important that we live to the fullest with a lot of passion.”
Posted by The Awareness Center, Inc. at 6/08/2007 07:38:00 PM