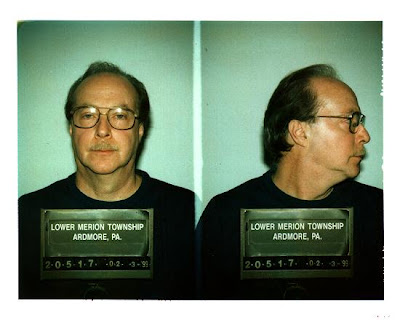 
The cantor of one of the world's largest synagogues, charged today with sexually abusing his young nephew in Lower Merion over four years, was later freed from a New York City jail on the promise that he would post bond by noon tomorrow.

Howard Nevison, 61, the third man in his family to be charged with abusing the now 12-year-old boy, was in custody for 12 hours after his predawn arrest at his Manhattan apartment. His release outraged Montgomery County authorities, who said they have had to wait years to prosecute the case because the victim was so traumatized by the alleged abuse.

Nevison has been the cantor – the official who sings or chants liturgical music and leads the congregation in prayer – at the influential Temple Emanu-El on New York's Fifth Avenue for more than 20 years. The synagogue, founded in 1845, has about 10,000 members.

"The cantor has been a faithful servant to our congregation for 23 years, and never in all of that time has there been any suggestion of improper behavior on his part," read a statement issued by the synagogue this afternoon.

Nevison, who is married and has no children, was originally denied bail in criminal court this afternoon. But his lawyer, John Patrick Deveney, immediately appealed to the New York State Supreme Court and Justice Arlene Goldberg set bail at $100,000. Nevison must post $10,000 tomorrow.

He also surrendered his passport to the office of Manhattan District Attorney Robert Morgenthau, who, coincidentally, is affiliated with Temple Emanu-El. Deveney said he didn't know whether Nevison and Morgenthau were friends or acquaintances.

Prosecutors said at least three incidents of abuse occurred between 1993, when the boy was 3, and 1997 - when Nevison visited the family for celebrations and holidays.

The child told investigators that his uncle "threatened to kill him if he ever told anyone about what he did." according to court papers. 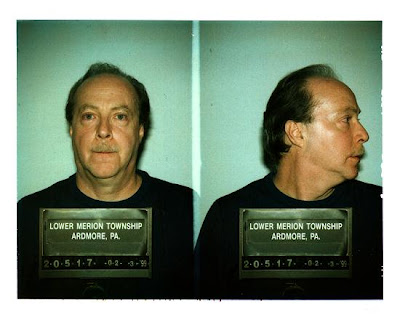 The boy's mother has changed her last name and that of her children to avoid the publicity, Castor said. The Inquirer is withholding their names.

An extradition hearing for Howard Nevison is set for March 19.

"He's a very well-respected man in his community," Deveney told the court. "He has very close ties to the community of New York."

Deveney said his client had been living with the possibility of charges for three years.

"With that threat, he never fled," Deveney said in court. "He could have gone and he didn't go. And he won't go now."

He thought Nevison would be allowed to surrender voluntarily, he added.

Castor, though, said he considered Nevison such a high flight risk that he had Lower Merion detectives, unannounced, pick him up at 5:30 a.m. at his home, a few blocks from the synagogue.

Castor said that authorities had been aware of the allegations against Howard Nevison for years, but that they could not proceed with prosecution because the boy was too petrified.

Castor acknowledged Nevison's stature within the Jewish community. "A cantor is a figure that is revered within the synagogue, and we tend to assume that religious figures are beyond reproach," he said.

But he also described Nevison as "a menacing presence" to the young child.

"He terrorized the child to the point he would have been too traumatized had he been required to testify," Castor said. "Originally, he wouldn't talk about Uncle Howard."

By last fall, court papers say, the boy told authorities he was ready to go ahead with the prosecution, despite his intense fear of his uncle and the continuing nightmares he suffered. Counseling has helped him muster the courage to testify, Castor said.

The head of Montgomery County's sex-crimes unit, Rich DiSipio, met with the boy, and Castor sat down with his parents to make sure all were prepared for the ordeal to come.

The statute of limitations for prosecuting the case would have run out in 2003, five years after the boy's parents first approached police about the alleged abuse.

Two years ago, when he was 10, the boy testified in Montgomery County at the preliminary hearing and trial of his uncle Lawrence Nevison, who was found guilty and sentenced to five to 15 years. He also testified at the preliminary hearing of his cousin Stewart Nevison, who pleaded guilty to abusing the boy and the boy's sister. Stewart Nevison served jail time and is on probation. Both men are registered in Montgomery County as sexual offenders under Megan's Law.

"He's the one who was violent," Castor said.

"I think he [Howard] believed the boy was so intimidated by him that he would not talk."

The boy's father, Henry Nevison, is a brother of Lawrence and Howard Nevison. He and Lawrence Nevison told investigators that their older brother Howard sexually abused them when they were children.

Paul J. Fink, professor of psychiatry at Temple University and past president of the American Psychiatric Association, said the Nevison case is unusual because it involves so many people from the same family. But it is not uncommon to see sexual abuse passed on, he said.

"Anybody who is sexually abused tends to abuse others," he said. "That's how they deal with it. There's no rational way to deal with that kind of trauma other than to have to swallow it and develop panic disorder, or do to others."

The Temple Emanu-El Web page describes the synagogue as the "largest Jewish house of worship in the world and the largest Reform Jewish congregation in the United States."

Nevison, known for his performances in cantorial concerts, was featured in "The Papal Concert to Commemorate the Holocaust," in April 1994, becoming the first cantor to sing in the Vatican.


MONTGOMERY COUNTY, PA (KYW 1060) A prominent New York City cantor has suffered a serious reversal in his defense against allegations that he sexually abused his young nephew at the boy's Lower Merion home.

When he goes to trial, Cantor Howard Nevison will be faced by his two younger brothers. Montgomery County judge Paul Tressler has ruled that their testimony will be allowed.

They will tell the court that when they were youngsters, their brother Howard sexually molested them.

Judge Tressler determined that the incidents they and the young nephew have described are so nearly similar as to become the signature of the same perpetrator.

Ironically, one of those brothers may appear in prison clothes. He's now serving time for sexually molesting the same nephew involved in the cantor's case.

Nevison's lawyers had attempted to keep the damaging testimony from the jury when Nevison goes on trial later this year. Without that evidence, the prosecution's case depends largely on the word of the young boy against the word of his prominent uncle.

Cantor's brothers to testify - Will detail his abuse of them as childrenBy JIM NOLAN
Philladelphia Daily News - Thursday, June 05, 2003

A Montgomery County judge yesterday ruled that the brothers of the prominent New York City cantor, who is accused of sexually assaulting his Main Line nephew, can testify against him at his upcoming trial.

Judge Paul W. Tressler said the circumstances surrounding alleged abuse detailed by the brothers was "distinctive and so nearly identical" to Howard Nevison's alleged abuse of his young nephew that it indicated a "signature of the same perpetrator."

The ruling was clearly a victory for county prosecutors, whose case will use the allegation of prior acts to buttress the account of the boy, a child actor who is now 13.

Larry Nevison, 56, and the boy's father, Henry Nevison, both claim to have been sexually assaulted by Howard Nevison when they were younger than 10.

Neither man ever filed charges, and the statute of limitations on the alleged crimes expired.

But years later, in February, 2002, Howard Nevison was arrested and charged with attacking Henry Nevison's son between 1993 and 1998, starting when the boy was roughly 4 years old.

The charges - involuntary deviant sexual intercourse, indecent assault and terroristic threats - stem from what prosecutors allege were several violent encounters with the boy during Uncle Howie's holiday visits to the Main Line.

Part of that work involved a prison visit with Larry Nevison, who was convicted in 2000 of sexually assaulting the boy himself. He is currently serving a five to 10 year sentence.

Howard Nevison, 62, is currently out on bail and on paid leave from his job as cantor for Temple Emanu-El, an affluent Fifth Avenue synagogue.

During earlier court hearings, First Assistant District Attorney Risa V. Ferman argued that the brother's testimony should be admissible at Nevison's trial as an indicator of prior acts of abuse.

Defense attorneys meanwhile, argued that the allegations were unproven, maliciously motivated and would severely prejudice a jury against their client, who is well-respected in New York circles and has no prior criminal record.

Yesterday, however, Tressler ruled that the similarities in the abuse alleged by Nevison's brothers offsets and outweighs the long period of time that transpired between the incidents. 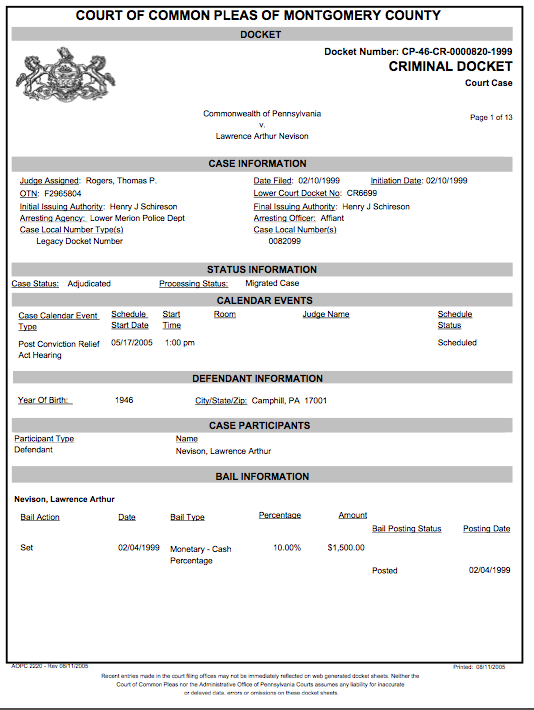 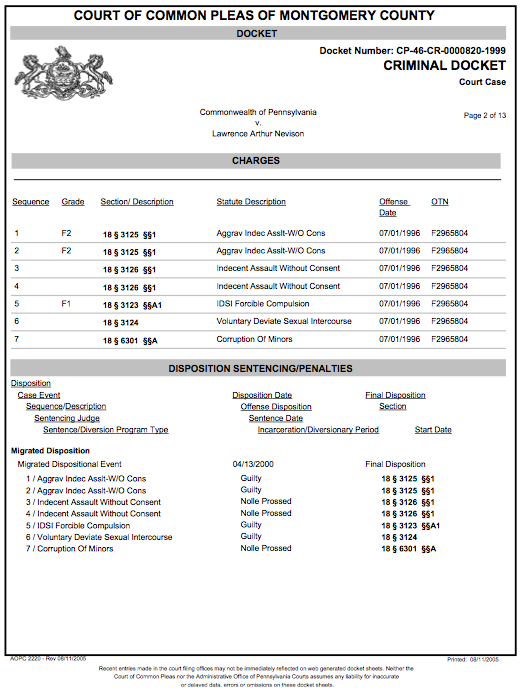 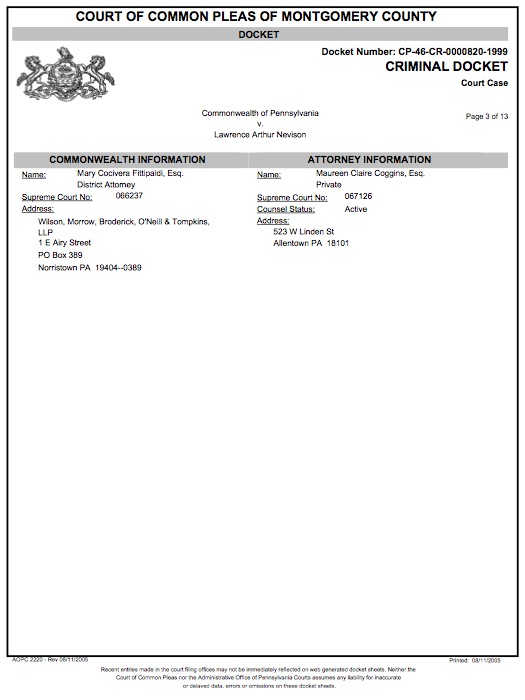 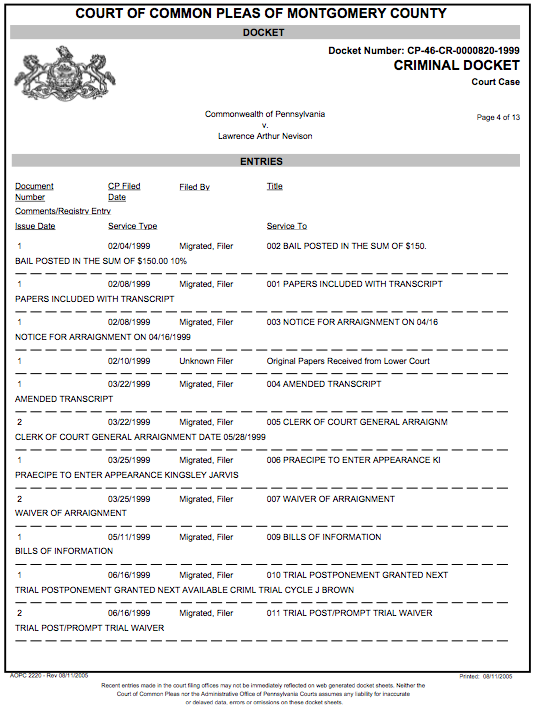 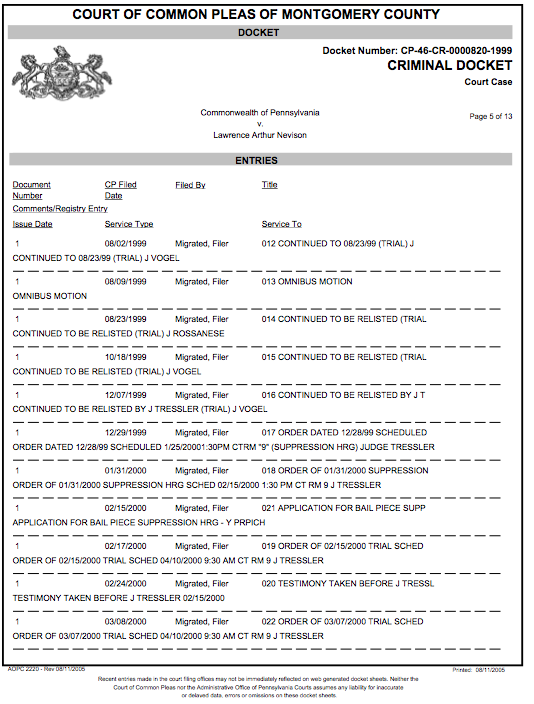 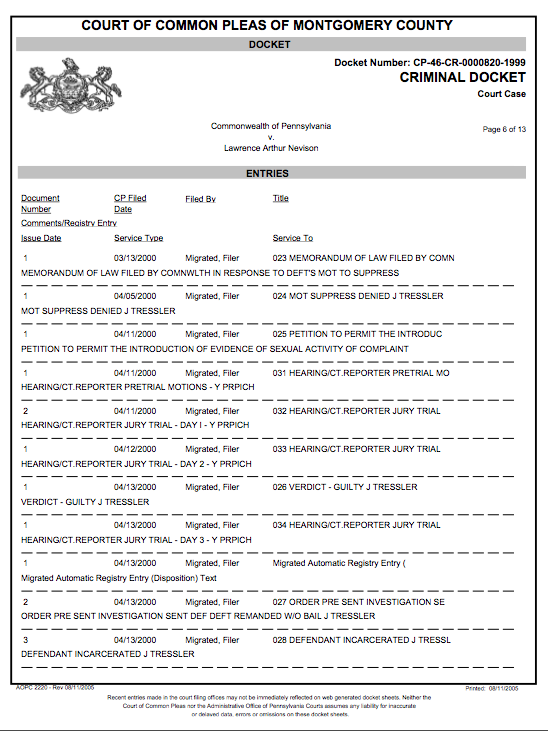 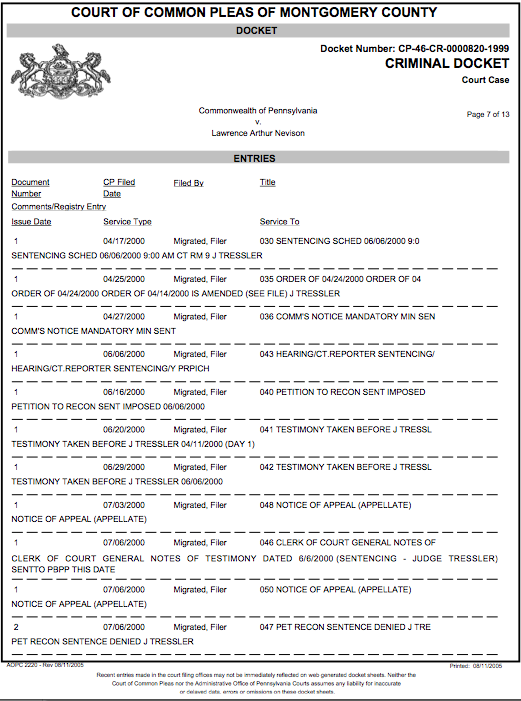 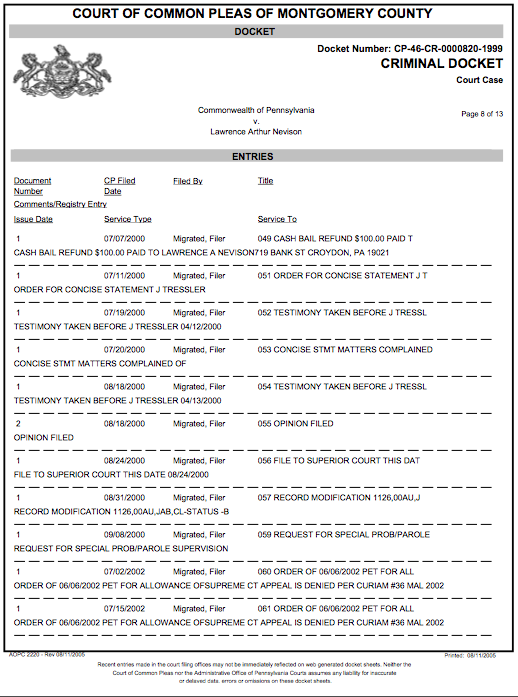 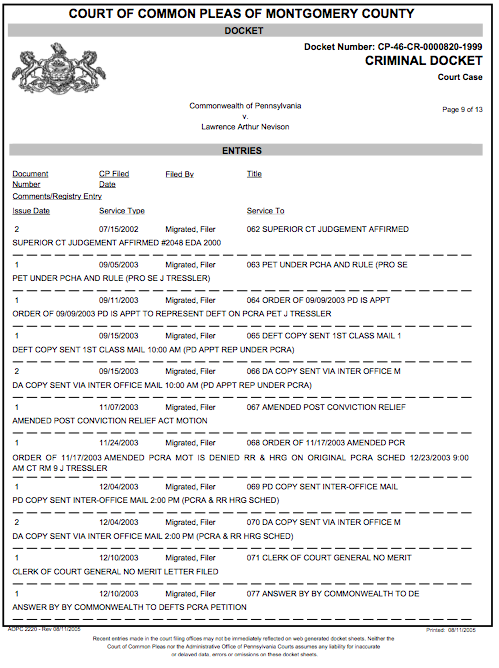 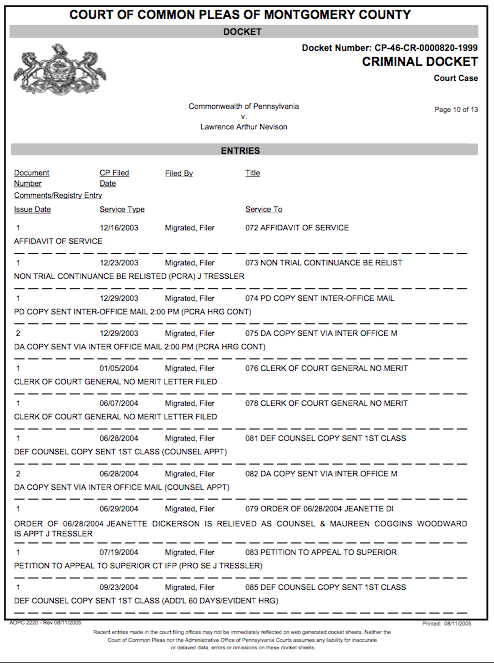 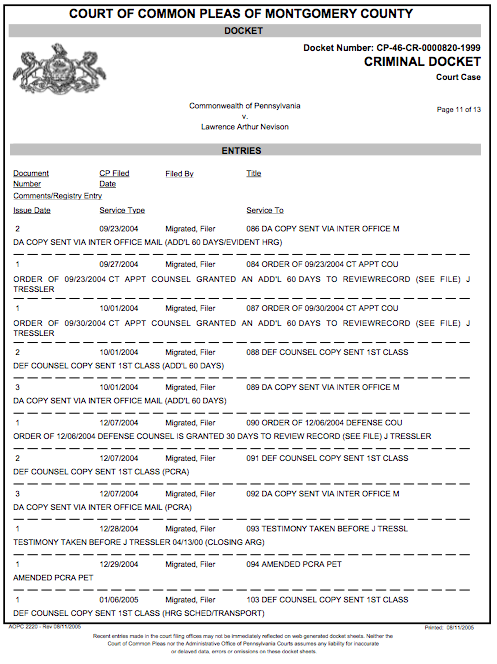 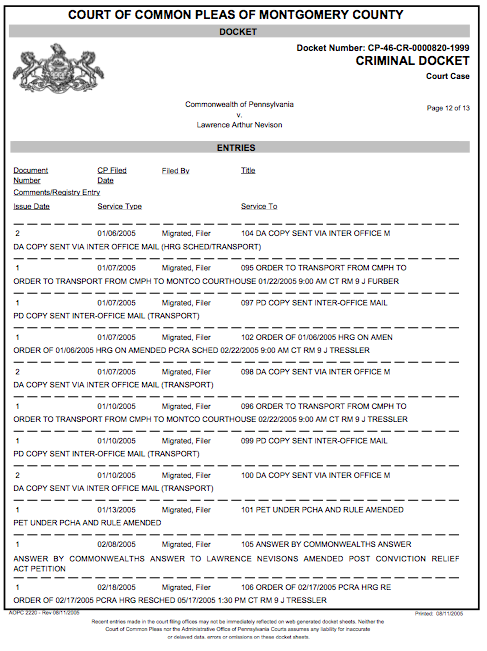 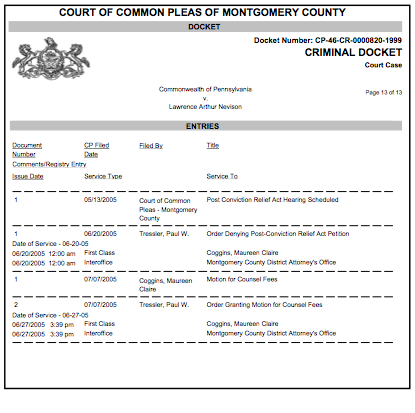