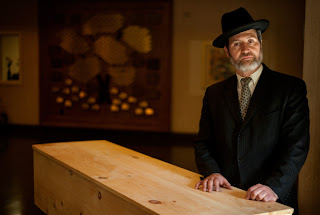 Is stopping a suicide merely a question of public interest - or is it also a spiritual matter involving God?

He is suffering from incurable cancer, has lost his job, is deep in debt, his wife wants a divorce, and he is estranged from his children. He decides to end his life and climbs over the rail of the Golden Gate Bridge.

As he is preparing to plunge into San Francisco Bay, he is spotted by police.

The police dispatch a highly trained psychologist, who talks to the man in an attempt to dissuade him from taking his life. In the meantime the police identify the man and confirm that all his problems are indeed true. He is not crazy, just distraught.

Should the police intervene? Whose life is it anyway?

THE FACTORS IN QUESTION
Is taking the man off the bridge is a legitimate use of police power?
Is it for or against the public interest to let people jump off bridges?

Is this a deeper issue concerning the preservation of life, or just a simple matter of public inconvenience?

Should society demand that he live - overriding his desire to end his own life?

Is there ever a time when suicide is justified, especially when a person is legally competent?

If a person has no choice about coming into the world, should they likewise have no choice when to go out?

Jewish Perspective
Judaism regards suicide as a criminal act. Someone who commits suicide is considered a murderer. It matters not whether he kills someone else or himself. His soul is not his to extinguish.

Judaism's opposition to suicide is found in the story of Noah's Ark. After the flood, God says to Noah:

The Talmud (Baba Kama 90b) learns from the first part of the verse, "And surely the blood of your lives I will demand," that one may not wound his own body. All the more so, he may not take his own life.

METAPHYSICAL LAWS
There is a deep spiritual consequence to suicide.

When a person commits suicide, the soul has nowhere to go. It cannot return to the body, because the body is destroyed. And it is not let in to any of the soul worlds, because its time has not come. This state of limbo is very painful. A person may commit suicide because he wants to escape, but in reality he is getting a far worse situation.

In this world, if we try hard enough sometimes we can solve the problem. But after death there are no solutions, only consequences.

When a Jew commits suicide, he is not permitted a full Jewish burial, and there is even a debate whether shiva (the seven-day mourning period) is observed or whether the kaddish prayer is said.

(In practice today, however, suicide is usually treated as a normal death, since it is assumed that the person was not of a normal state of mind.)

THE SUICIDE OF KING SAUL
In the Bible we see an incident in which suicide seems to be permitted.

The Philistines were battling against Israel, and the men of Israel fled from before the Philistines and fell slain on Mount Gilboa. The Philistines overtook Saul and his sons, and they slew ... the sons of Saul. The battle then focused against Saul. The archers found him, and Saul was terrified of them. Saul said to his armor-bearer, "Draw your sword and stab me with it, lest these men come to stab and torture me." But his armor-bearer did not consent, for he was very afraid. So Saul took his sword and fell upon it. When the armor-bearer saw that Saul was dying, he also fell upon his sword and died with him. (Samuel II, 1:5-10)

The Sages offer a number of reasons why Saul's suicide was unique:


In summary, suicide is absolutely prohibited, unless there are unusual and extenuating circumstances - e.g. forced conversion, endangering the lives of others, or sanctifying the Name of God.

DISCLAIMER: This module discusses sources for the purpose of education. Any real-life situation must be discussed with a rabbi, well-versed in Jewish law.