I personally wish that the training provided at YU was connected to the New York City Alliance Against Sexual Assault.  Why not make all rabbinical student go through the required 40 hour rape victim advocate training, so that way they really know how to deal with such cases. As much as we would like to believe that Dr. David Pelcovitz knows what he is doing, the truth of the matter is that he doesn't.  It's obvious be the fact that he has teamed up with David Mandel, who is the CEO of Ohel.

Also write letters to the NY Times regarding this article and who they are using as "experts" on the topic.

Click here to watch David Mandel telling an audience in Baltimore not to make hot-line or police reports when they suspect a child has been abused. 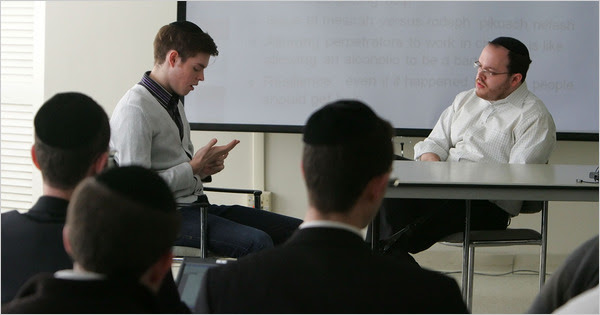 After four years of training, most rabbinical students can speak fluent Hebrew, give a passable exegesis on any Biblical passage and deliver a fine sermon.

Very few, however, know what to do when they have to inform parents that their child has been killed in an accident.

Directors of the Rabbi Isaac Elchanan Theological Seminary atYeshiva University in Upper Manhattan grappled with this training gap for years before settling on a way of at least simulating real life in a classroom: They have been inviting actors and acting students to sit across a table from seminarians and act out roles — as stunned parents, suicidal teenagers, terminally ill V.I.P.’s “or anything we can think of,” said Rabbi Marc Penner, the seminary’s director of rabbinical training, “to try to shock the students.”
The actors work through a New York agency called Professional Actors Training and Helping, which also finds role-players for medical students being introduced to the real-life emotions of sick people and their families. Some are stage veterans, like the Broadway and Off Broadway actor Joy Seligsohn, who in a recent class played an elderly woman dealing with the indignities and sense of invisibility that many older people confront.
Most are novice actors and recent drama school graduates like Keith Hendershot, 20, of Canton, Ohio, who on Tuesday brought his dramatic skills to the advanced pastoral counseling class in the role of Keith, a tormented victim of childhood sexual abuse who visits his rabbi to talk, but seems unable to bring up the subject.
The teachers, Rabbi Penner and Dr. David Pelcovitz, a psychologist, give the actors a sketch of the scenario, and a minimum of direction. In one outline, the actor is to told to act “uncomfortably.” In another, the actor is instructed, “Cry if you can.”
Most of the characterization is improvised.
“So, Keith. How’s things? What’s happening?” said Yechiel Shaffer, 25, the rabbinical student who took the first turn during Tuesday’s exercise. He folded his hands.
“Not much, not too much,” said Keith, picking at his cuticles. “Hey, so, how are you?”
They circled for a while. The student rabbi elicited some information about “inappropriate” behavior on the part of an adult family member. Then there was a long silence.
The student waited, a little like a chess player waiting for an opponent’s next move.
“Cut!” said Rabbi Penner. “Who wants to comment on how we’re doing so far?”
The roughly 15 students in this year’s classes have learned a few clear-cut dos and don’ts: Never take calls on your cellphone when counseling someone. Never express shock, or say, “Oh, my God!” or show disgust when a congregant unburdens himself of a terrible secret.
But for the most part, the lessons are of the subtle and intangible kind.
“He’s not asking enough questions,” said one student watching the conversation between the student rabbi and the abuse victim. “He has to ask some specific questions. We don’t really know what happened yet.”
Dr. Pelcovitz said sometimes the hardest thing for a young rabbi to say is the word penis. “But this comes with experience,” he added.
Several weeks ago, Benjamin Houben, 24, was placed across the table from an actor playing a man who had to be informed of the death of his wife. “It was supposed to be an aneurysm, a sudden collapse,” Mr. Houben recalled. “It happened in the synagogue, which is why I am the one who has to inform him.”
To prepare for the scene, the student paused outside the room, trying to conjure the feeling of death. He entered the classroom, wearing a look of grief that he hoped would telegraph what he was about to say.
But the actor was not about to make the job easier. He waited to be told, then he went to pieces with “great skill,” said Mr. Houben, whose face seemed to sag just retelling the scene.
“I did not realize how it would be,” he said.
The lessons he learned from the simulation, he said, were these: People may not believe you when you tell them. It may take a long time for them to absorb the shock. And after that, it only gets worse.
Rabbi Penner, listening to Mr. Houben, nodded his head.
“That was a good class,” he said.
Posted by The Awareness Center, Inc. at 2/09/2010 07:23:00 PM