Case of Gary Rosenblatt
This Page is under construction

Gary Rosenblatt has always had a very strong allegiance to both Yeshiva University and the Rabbinical Council of America (RCA).

For nearly over a decade there has been a ban created by Gary Rosenblatt against many Jewish news media groups publishing the name of Vicki Polin or The Awareness Center.

The ban began after The Awareness Center applied pressure to have a story regarding the case of Rabbi Mordechai Winiarz (AKA: Marc Gafni) published in the New York Jewish Week.

According to reports, Gary Rosenblatt had been holding on to a story he wrote about Gafni  since the early 1990s; explaining to one of the survivors the story would be published.

Even though for years Rosenblatt's paper has been publishing stories regarding sex crimes, there are several individuals who have made allegations that Gary Rosenblatt has been assisting various Jewish leaders who are associated with Yeshiva University or those connected to the RCA cover up sex crimes.

Rosenblatt reinventing history when it comes to the case of Rabbi Mordechai Gafni?
By Vicki Polin
The Awareness Center's Daily Newsletter - June 16, 2006

Early in 2003, while The Awareness Center, Inc. was in its infancy, several orthodox rabbis (who had a connection with the Rabbinic Council of America and Agudath Israel) started calling to request our organization to do something about Marc Gafni (AKA: Mordechai Winiarz). In order to comply with wishes of the rabbonim, our board and volunteers attempted to track down three known survivors of this alleged sex offender.

We had very little difficulties tracking down the second and third survivors, yet had trouble locating the first. Gary Rosenblatt was the link to finding the first survivor.

During our initial conversation with Winiarz/Gafni's first survivor, we learned that several years prior, she had provided Rosenblatt with her story. Back in the 90’s Gary had heard rumors and tracked her down. The first survivor stated that she was not seeking an opportunity to share her abuse history, but was convinced by Rosenblatt that sharing the story might spare future women the pain of abuse at Winiarz/Gafni's hands.

This survivor shared every painful detail with Gary Rosenblatt. Gary promised that he would publish a story right away. Years went by, there was no further contact and a story was never published. The survivor felt exploited and betrayed.

In 2004 finally Gary Rosenblatt reestablished contact with the first survivor, providing her with the contact information for The Awareness Center. The survivor was apprehensive, yet followed through and made the initial call.

I'll never forget the day Survivors two and three communicated with the first survivor. It was amazing to watch; a day filled with old terror and pain transforming into tears of healing, joy and empowerment.

Gary had ample information and factual content from highly respected rabbis and members of the community. The original story Gary wrote was to be published in the spring of 2004, yet nothing happened. Every week Mr. Rosenblatt told the survivors it would be published the following week, yet nothing happened. It wasn't until September 24, 2004, that an extremely watered down version of what was originally written was published.

In Gary Rosenblatt’s most recent article “Deconstructing The Gafni Case” he wrote:

"They felt they were the victims, that they had suffered enough and did not want to go through a public scrutiny of past abuses and humiliations. His former wives and the other women had new lives to live and reputations to protect."

The problem with this statement is; Gary ceases to mention that in the code of journalistic ethics created by the US department of Justice, one should never publish the names of victims of sex crimes. Three women spoke directly to Rosenblatt with the understanding that thier names would not be used, all of whom were quoted in his original article. It is common journalistic practice to have unnamed sources. Remember Watergate?

"But for a journalist probing these accusations and knowing that the resulting expose could destroy the subject's career, professional standards require offering up real people and real names to make those charges. That is why I spent three years on the Gafni trail, interviewing dozens of people about the allegations of sexual misbehavior, before publishing anything. And at that point, in September 2004, I wrote an opinion column rather than a news story because I still did not have anyone with firsthand experience of abuse speaking on the record."

“And I offered up Gafni’s denials, and other rabbis defending him. They said that even if these things had happened, it was a long time ago and he had done teshuva (repentance). . . I think I should have written at the time that I found the women far more credible than Gafni. . . One thinks I should have acted on my instincts and been tougher on Gafni, even though I had no firsthand accounts on the record. Another said I was right to have held out for on-the-record attribution.”

The survivor who was thirteen at the time of her abuse stated that it wasn’t until years after her initial contact with Mr. Rosenblatt that he connected her with The Awareness Center. The survivor had already given a detailed account of her sexual assault directly to Rosenblatt, yet she requested that her name be withheld from the story. From the point this survivor contacted The Awareness Center, it was another six months before Gary's watered down article was published. He promised the survivor years before that he would publish the story the week following the initial interview, yet nothing ever happened.

Back in 2001, survivor number one received a telephone call from Winiarz/Gafni supporter Naomi Mark, ACSW. Naomi's goal was for a survivor of childhood sexual abuse to meet with her offender. Naomi told this survivor that Marc Winiarz/Gafni wanted to make amends. She told the survivor that Mordechai Winiarz/Gafni had wrote a letter stating: “he thought the survivor was hurting because he ended their relationship instead of marrying her”. He wanted to apologize for "breaking her heart.”

The survivor told Ms. Mark that she would not meet with the man who raped her. The survivor disclosed that she let Naomi Mark know that “the relationship” Winiarz/Gafni was referring to should be called RAPE. A far cry from what Winiarz/Gafni called a “heartache, or a fallen romance.”

It appears Gary Rosenblatt's attempt to re-create history has been influenced by his long time friend, Rabbi Saul Berman -- who to this day is believed to be a defender of Mordechai Gafni.

If Mordechai Winiarz/Gafni has done teshuva, why has he not contacted the other women whom he victimized? Why didn't he ever offer to pay for the pain and suffering all three women endured because of his offenses?

Once again Rosenblatt's affiliation with Rabbi Saul Bermaninfluenced his ability to get the facts straight. Gary Rosenblatt had firsthand accounts. He spoke to three women who were sexually victimized by Mordechai Winiarz (AKA: Marc Gafni). Two survivors had sexual contact; the third was a survivor of inappropriate sexual advances by an orthodox rabbi, who was also a married man.

Gary Rosenblatt spoke to numerous rabbis and other credible individuals who backed the survivor’s stories. What more evidence did he need?

If Rosenblatt really wants to make amends to the survivors of Winiarz/Gafni, he should put an advertisement in the New York Jewish Week calling for the extradition of Mordechai Winiarz/Gafni, and have all those who have blindly supported Winiarz/Gafni sign it.


Gary Rosenblatt can be reached by e-mail at Gary@jewishweek.org


Don't forget about what Rabbi Kenneth Hain said regarding the Gafni case:

Gary Rosenblatt is editor and publisher of The Jewish Week of New York, the largest Jewish newspaper in the U.S.
Before coming to New York in 1993, Rosenblatt was editor of the Baltimore Jewish Times for 19 years. He has won numerous awards for his writing from secular and Jewish organizations. His analysis of the Simon Wiesenthal Center of Los Angeles was a finalist for the Pulitzer Prize in the category of Special Reporting in 1985. The honor marked the first time an article in a Jewish publication was cited in the Pulitzer competition, which dates back to 1917. His investigative reporting on a rabbi's abuse of teens received national acclaim. It won the Casey Medal for Meretorious Journalism in 2001, and led to the arrest and conviction of the rabbi.
Rosenblatt is chairman of the Fund for Jewish Investigative Journalism and founding director of Write On For Israel, a Jewish Week-sponsored advocacy journalism program for high school students. 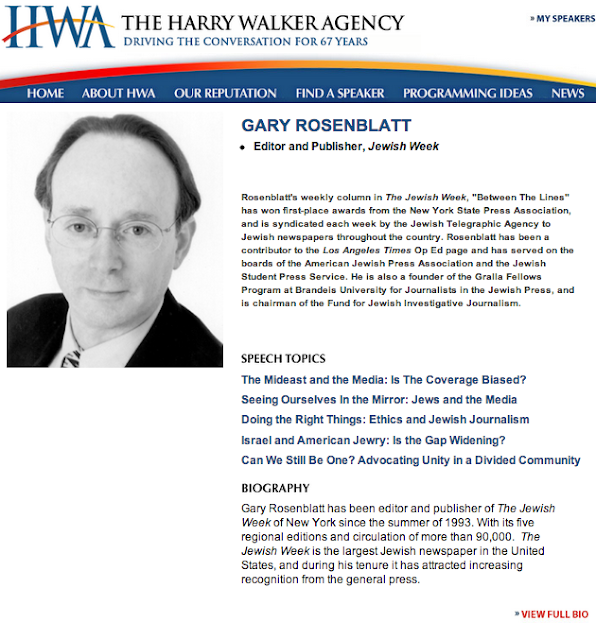 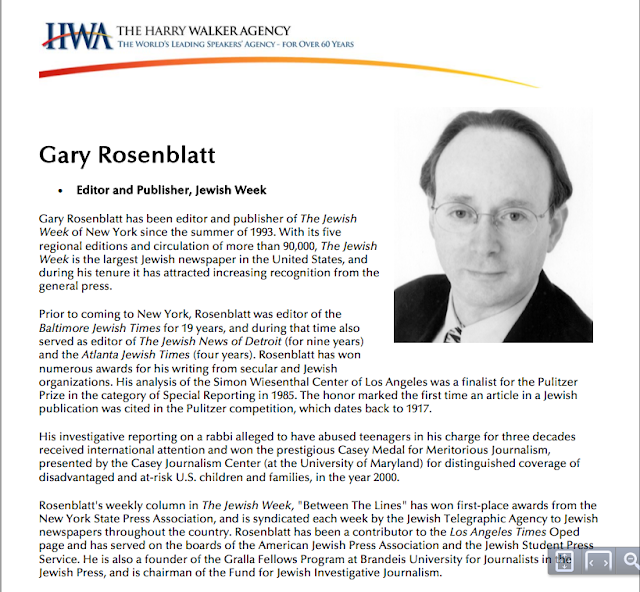