Allegations of child molestation of at least two of the pupils in a school belonging to the hassidic sect.

If you have anymore information about this case, please forward it to  The Awareness Center.

Analysis: Keeping it all under wraps

Yisrael Valis had just finished saying kaddish over the body of his three-month-old son before the funeral Monday evening in Jerusalem when his wife cried out to him, "You didn't do anything, I know that. And you didn't do anything to me. They can connect me to a lie-detector, it's the truth."

Since Valis himself admitted to police investigators that he had brutalized his baby son and battered his wife on several occasions, the protestations of his innocence would seem to be the symptomatic denial of a victim of severe domestic violence, eager like other women in her situation to take the blame upon herself. But in this case, the denial isn't only the bereaved mother's; it's the denial of an entire community.

Perhaps the most tragic detail of Yitzhak Shmuel's death is the fact that, if his condition hadn't been so critical that his father had to call for an ambulance when the infant lost consciousness, the alleged abuse would have continued, perhaps for many years, without police or social services ever having an inkling of what was going on.

The Eda Haredit sect of the haredi community in Jerusalem are fanatical about having no contact with the heretical Zionist state; they don't even accept handouts from the state budget. It goes without saying that any wrongdoing of any kind is swept out of sight and dealt with within the circle.

In this case it was the health authorities who notified the police that there was a suspected case of parental violence, but Valis's speedy acceptance of blame didn't prevent his family and other members of the Eda, including Rabbi Yitzhak Weiss, head of its Rabbinical Court, from closing ranks and claiming that the charges were a "blood libel" aimed at besmirching the entire community. The threats of "setting Jerusalem ablaze" if Valis is not released is a stark reminder of the hundreds and perhaps thousands of cases of domestic violence and sexual molestation going on behind closed doors that will never be reported or treated professionally.

Granted, the Eda Haredit is a more isolated sect in the haredi world and other haredi communities are admitting, at least privately, that they have a problem with domestic violence and have begun opening up to professional help - but, even there, it is a slow and often reluctant process. The tendency to "close things up inside" is still very strong and, when it can be done without involving the police or other authorities, that will always be the preferred method.

A representative of one of the most powerful hassidic leaders in the country is currently negotiating a deal with the family of one of the hassidim, who sexually molested at least two of the pupils in a school belonging to the hassidic sect. The deal is expected to include a promise not to go to the police.

The Edah Haredit school system refuses to accept funds from the State of Israel for ideological reasons. 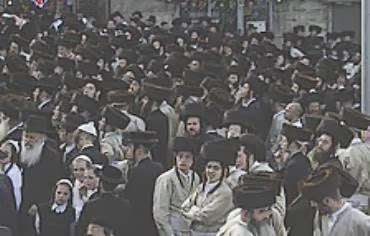 Some 20,000 boys aged eight to 13 will descend on the road leading to Jerusalem's Ramot neighborhood at midday on Monday to mark the 30th anniversary of an independent school system that refuses to accept funds from the State of Israel for ideological reasons. The boys will congregate at the Tamir wedding hall and then walk toward the adjacent Kiryat Sanz neighborhood. As a result of celebrations, Rehov Shefa Haim, which connects Kiryat Sanz with central Jerusalem, will be closed. Created by Rabbi Yoel Teitelbaum, the spiritual leader of Satmar hassidism after the Holocaust, the Keren Hatzola (emergency fund) foots the bill for an extensive school system that teaches a curriculum based solely on traditional sources such as the Bible, Mishnah and Talmud. Teitelbaum established the fund in 1978 after prime minister Menachem Begin's government, as part of a deal with haredi politicians, began offering substantial funding to educational institutions belonging to ultra-Orthodoxy. Satmar and other hassidic sects such as Toldot Aharon and the more virulently anti-Zionist Lithuanian streams of Orthodoxy, all consolidated under the rabbinical body known as the Edah Haredit, refuse to cooperate with the Jewish state, which they see as a rebellion against God's will that Jews remain powerless and sovereignless until the coming of the messiah. Members of the Edah Haredit do not participate in elections, either. The rally and commemoration will take place three days before the 2008 Jerusalem Gay Pride Parade. The Edah Haredit, which was in past years spearheaded anti-gay parade protests, has decided not to stage demonstrations against the march this year. However, a source close to the Edah Haredit told The Jerusalem Post that speeches at the 30-year-anniversary ceremony would mention the parade. "We will be emphasizing what we are doing to strengthen the holiness of the Jewish people through our education, in contrast to those people who are desecrating Jerusalem's holiness," the source said. The Keren Hatzola helps fund more than 100 institutions, including in Beit She'an, Ashdod, Safed, Haifa and Beersheba.