Ostrowce, Poland and Toronto, Canada
An unnamed Chazen was accused of kidnapping young boys from Europe and bringing them to Toronto, Canada.
Disclaimer: Inclusion in this website does not constitute a recommendation or endorsement. Individuals must decide for themselves if the resources meet their own personal needs. 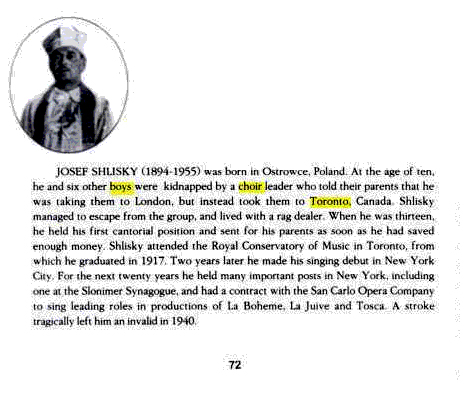 1894 - 1955
By Rabbi Geoffrey Shisler
http://www.chazzanut.com/articles/shlisky.html
Kidnapped as a young child, 'discovered' while working in a factory, feted as one of America's top line Cantors, and stricken down at the age of 40. Truly the stuff of a great novel, and if the recorded history is to be believed, Joseph Shlisky had one of the most theatrical lives of all the Chazanim recorded here so far.
Born in Ostrowce, Poland, like so many young Jewish boys who could sing, Joseph Shlisky joined the local Shul choir as a small child. At the age of seven he was virtually kidnapped by the Chazan, who told his parents that he was taking him on a tour to London, but actually went to Toronto instead.
After escaping from the clutches of this unscrupulous Chazan, he eventually found a home with one of his uncles, who had emigrated to Toronto.
Shlisky never thought about a musical career until, one day, whilst working in one of the factories of T. Eaton. Co, he was heard singing by Lady Eaton. She was so impressed by his voice that she sponsored his training at the Royal Conservatory in Toronto.
When he gave his first public performance in New York City in 1919, the critics were very enthusiastic about him.
In 1920 Joseph heard that the Slonimer Synagogue was looking for a Chazan for the Yamim Noraim and he went to the President's leather factory to audition! Needless to say, he got the position and remained at that Shul for a further two years.
For the rest of his singing career, he held posts at various leading new York Synagogues, giving numerous concerts, appearing on radio and making recordings.
He brought his parents over to live with him in the USA.
Shlisky was signed up to appear with the San Carlo Opera Company but, like so many other outstanding Chazanim, eventually declined because it would have entailed him breaking Shabbat and Yom Tov.
It is said that, owing to his own experiences as a child, he was always very helpful towards Chazanim who were recently arrived in the country, and would often appear at charity and benefit concerts for them.
Sadly, when he was at the very peak of his career, after Pesach 1934, he suffered a paralytic stroke, and never sang again.
Shlisky did not record a great number of pieces but fortunately, we do have a fair representation of his art.
He had a very high tenor voice, with a most extraordinary flexibility. He was able to change from the highest, most beautiful falsetto, into full voice, with consummate ease and he used this facility most effectively in many of his pieces.
Shlisky's style, and the timbre of his voice, were very distinctive. He truly was one of the 'greats' of the Golden Age of Chazanim.
FAIR USE NOTICE

Some of the information on The Awareness Center's web pages may contain copyrighted material the use of which has not always been specifically authorized by the copyright owner. We are making such material available in our efforts to advance understanding of environmental, political, human rights, economic, democracy, scientific, and social justice issues, etc.
We believe this constitutes a 'fair use' of any such copyrighted material as provided for in section 107 of the US Copyright Law. In accordance with Title 17 U.S.C. Section 107, the material on this site is distributed without profit to those who have expressed a prior interest in receiving the included information for research and educational purposes.
For more information go to: http://www.law.cornell.edu/uscode/17/107.shtml . If you wish to use copyrighted material from this update for purposes of your own that go beyond 'fair use', you must obtain permission from the copyright owner.
Posted by The Awareness Center, Inc. at 12/01/2005 11:28:00 PM