Affection Or Abuse? 'I Never Felt Threatened' - A student of Rabbi Matis Weinberg stands by his 'rebbe.'

Affection Or Abuse?
'I Never Felt Threatened' - A student of Rabbi Matis Weinberg stands by his 'rebbe.' 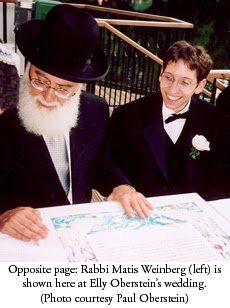 Elly Oberstein, 25, first learned of Rabbi Matis Weinberg through his books and tape recordings. It was in his first year at Ner Israel Rabbinical College in Pikesville that Mr. Oberstein, who is now studying at Ohio State University for his medical degree, met Rabbi Weinberg.
This started a close relationship that continues today, some eight years later. Rabbi Weinberg officiated at Mr. Oberstein's wedding. And there almost isn't a day when Mr. Oberstein doesn't listen to a tape of a Rabbi Weinberg lecture.

"When I first met Rabbi Weinberg, I was instantly enveloped by him in a great bear hug," said Mr. Oberstein. "I must admit that I had not expected this reaction. I was not surprised by the nature of the contact because there are other rabbis, especially in the more Chasidic-inspired areas of Judaism, who have greeted me in a similar manner. Rather, I was not expecting this response because Rabbi Weinberg was not part of that culture.

"I was more attracted to the stricter learning and analysis that is the hallmark of Ner Israel. And in that setting, physical shows of emotion are frowned upon. As teenagers in yeshiva, we were not encourage to explore our developing sexuality and we carefully glossed over the many references to desire that appear in the Torah and the Talmud."

Mr. Oberstein, whose father, Rabbi Leonard Oberstein, is spiritual leader of Randallstown Synagogue Center, said that he developed an intense learning relationship with the man he calls his "rebbe." The student ended up moving to Israel, where for four years he lived primarily in the home of Rabbi Weinberg and his family while he studied in yeshiva and at Bar Ilan University. He spent almost every Shabbat in the Weinberg home.

"During this time, I developed a very close relationship with my rebbe, one that made me feel more like a son than a student," said Mr. Oberstein. "But after seeing so many students of Rabbi Weinberg's emerge with the same feeling, I suspect that perhaps this is what it means to be a student of a rabbi who places such great value on relationships in addition to study and knowledge. I certainly feel that I have a close personal connection to Rabbi Weinberg and that he is someone I can turn to with my problems, someone to offer a sympathetic hug or a blessing on a Friday night.

"But in all of those years, I never felt threatened by this contact, nor did I feel that it ever affect my ability to have relationships with other friends and teachers."

Mr. Oberstein added that since moving to Columbus, Oh., there have been at least five occasions when after mentioning Rabbi Weinberg's name, there have been others who have recalled their own meaningful encounters with him

"I suspect that in my initial encounters with Rabbi Weinberg and in many other people's encounters, we gained a perspective that went beyond the subject at hand," Mr. Oberstein said. "Many people who I speak to feel that in hearing Rav Weinberg teach Torah, they appreciated some of the possibilities that the Jewish tradition offers. These are people who have experienced a broad range of other fields, and they sense that Rabbi Weinberg teaches honesty, that he seeks to find the Torah relevant to issues that are at the forefront of the modern world. To me, it continues to be a tragedy that anyone would try to stifle such a message."

Mr. Oberstein said that all along, it is his rebbe's honesty that speaks to him. The rabbi, he said, encourages his students to consider sources. "His influence on my thinking is pervasive," said Mr. Oberstein.

For example, the story of Abraham smashing his father's idols. "He didn't teach me to go around smashing idols. He believes, though, that idols were projections and false beliefs, and he taught me to be wary of someone injecting false information. Look at the context and trace it to its source.

"In another way," he continued, "I felt that anything part of our Judaism was part of our learning. In a yeshiva sense, you think of learning Jewish law as the main thing we do as Jews. In the world I lived in with him, every single element was just as important to be lived as a Jew. We took time off to go to an orchard to pick essrogim. We baked matzohs for Pesach. Learning from my rebbe was part of a journey about truth and what God wants from us."

Mr. Oberstein said that the hugs he receive were unexpected but they were "genuine. You sense when something is genuine. The hard part of the issue is for everyone to know what's genuine."

He said Rabbi Weinberg never attempted any inappropriate physical gesture in the years that he lived with him, Rabbi' Weinberg's wife, Tzippora, and some members or all of their 10 children. An occasional kiss on the forehead as part of a Shabbat blessing was all that he ever experienced.

"Many people I met were students of his who spoke to him and saw him in Israel," Mr. Oberstein said. "I knew he had a lot of students who had a relationship of 20 years with him. But there was never any suggestions that anything was wrong. But there were a couple of people in Baltimore, when I came home for a holiday, who when they heard I was associated with Rabbi Weinberg, they rolled their eyes."

Mr. Oberstein said that he looks to the Ethics of Our Fathers and the teaching "judge someone for the benefit of good" when it comes to a situation such as this.

"I am comfortable assuming good things," he said. "What I saw in five years with he and his family was reality. What rankles me a lot is that this all must be painful for him and his family. I've called and told him that I loved him. I don't view that as a violation. I don't view my relationship with him as a negative. I hope that people will still be able to benefit from his teachings."