Case of Matthew A. Lowe

Case of Matthew A. Lowe
(AKA: Matt Lowe; Matthew Lowe)

Pleaded no contest in circuit court to three counts: two misdemeanor charges of exposure of sexual organs and one felony charge of aggravated battery.

There are several individuals by the name of Matthew Lowe.  The individual discussed on this page was born April 21, 1986. 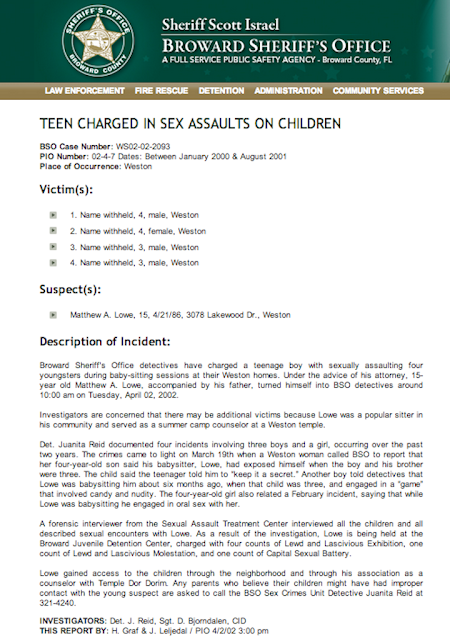 WESTON, Fla. (AP) - A teen-age baby sitter surrendered Tuesday on charges he sexually assaulted four children over the past two years while he cared for them in their homes, authorities said.

Accompanied by his father, Matthew A. Lowe, 15, surrendered to Broward County sheriff's investigators.

The incidents involved three boys and a girl between January 2000 and August 2001, deputies said.

The investigation began in March when a Weston woman called sheriff's investigators and reported her 4-year old son was molested by Lowe, deputies said.

Investigators said they are concerned there are additional victims because Lowe was a popular sitter in the community and also served as a summer camp counselor at a Weston synagogue, Temple Dor Dorim.

Messages left at Lowe's home and the synagogue were not immediately returned Tuesday.

FORT LAUDERDALE, Fla. (AP) - A 17-year-old accused early last year of sexually abusing children while baby-sitting them in their homes was sentenced Tuesday to six years probation on lesser charges.

Matthew A. Lowe, who was 15 when charged, pleaded no contest in circuit court to three counts: two misdemeanor charges of exposure of sexual organs and one felony charge of aggravated battery.

"The case got chopped down little by little over the last 1 1/4 years," said the teen's attorney, David Bogenschutz.

He was sentenced as a youthful offender and must comply with a long list of rules, but will not have a criminal record if he completes probation successfully.

The mother of a victim whose daughter was three at the time the charges were filed said the case took too long to prosecute.

"I can understand why other parents didn't come forward," she said, minutes after the state and defense reached a resolution. "It's a brutal process."

"Never doubt that a small group of thoughtful, committed citizens can change the world. Indeed, it is the only thing that ever has." Margaret Mead