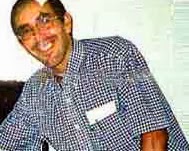 Following a young girl's testimony, police arrested a Schteinberg at his home early Tuesday where they found pictures of nude girls taken in the diplomat's apartment.

If you have more information on this case please forward it to The Awareness Center.

Civil and Federal police are investigating the involvement of Consul Assistant of Israel in Rio de Janeiro, Arie Scher, in an international minors prostitution network. The police got to the consul after searching the house owned by 40-year old school teacher George Schteinberg, where police found 154 photos of naked teenagers and 12 VCR tapes. Schteinberg was arrested in a special cell for prisoners with university degrees.

Both men were accused by 17-year old R.R., who called the police after seeing pictures of herself naked in the Internet. She said that she worked for the schoolteacher as a secretary and earned R$ 200 a month. The girl also revealed that she used to go to Scher's house with her friends, where they took off their clothes and were photographed. According to the teenager, Scher also liked the company of boys and had an intimate relationship with Schteinberg, as shone by a photograph in which they appear naked together. In Scher's house, the police found 21 pornographic pictures of girls, five VCR and two DVD tapes.

The principal of A Liessin school, a traditional Israeli school in Rio de Janeiro where Schteinberg used to teach, released a note to the press informing that they had never had any information whatsoever about discrediting behavior regarding the teacher. Students said to be astonished because the teacher "seemed to be a very serious, nice and police person." Schteinberg will be indicted for corruption and exploitation of minors and may be convicted for 4 to 10 years in prison for the first crime and 1 to 4 years in jail for the second, depending on the charges.

JERUSALEM (July 6) - Brazilian police continued to surround the Israeli consulate in Rio de Janeiro in the belief that Israeli vice-consul in Rio Aryeh Scher, wanted on suspicion of running a child pornography ring, had taken refuge there. However Foreign Ministry officials said Scher has been en route to Israel for the past two days.

Scher, who was at one point consul-general in Rio, was declared a fugitive by Brazilian authorities after a search of his apartment on Tuesday yielded what police officials described as evidence it was used for the manufacture of pornographic material, some of them involving underage girls.

A Foreign Ministry spokesman declined to comment on whether the Brazilian police had been informed of Scher's whereabouts, but said that general-consul Eitan Sorkin would meet with Brazilian foreign ministry officials yesterday afternoon.

Brazilian authorities notified the Israeli embassy of plans to revoke Scher's diplomatic immunity on Tuesday, prior to the search. By the time police were able to obtain a warrant to search Scher's penthouse, the vice-consul was already on his way back to Israel, where he will face a Foreign Ministry inquiry. A ministry spokesman said that Scher had been recalled when the first evidence of possible misconduct surfaced, and that he had left the country via "legal diplomatic channels."

The investigation that culminated in the search of Scher's apartment began when a 17-year-old girl accused Georges Schteinberg, a 40-year-old Hebrew teacher of using her as a model in pornographic pictures and of distributing them on the Internet. Photographs of nude minors posed on a car with diplomatic plates were discovered in a search of Schteinberg's residence earlier in the week, in addition to massive quantities of pornographic material. Police then traced the car in the pictures back to Scher.

The search of Scher's apartment confirmed that some of the photographs found at Schteinberg's residence had been taken in the vice-consul's penthouse.

Schteinberg, who is also alleged to have run a service that brought tourists to Brazil to visit child prostitutes, has since been charged with sexual exploitation of minors.

Police began a hunt for Israel's administration consul to Rio de Janeiro, Arie Scher, Tuesday and the Israeli government said it was recalling the middle-ranking diplomat to investigate whether he was innocent or guilty.

Following a young girl's testimony, police arrested a Hebrew teacher at his home early Tuesday where they found pictures of nude girls taken in the diplomat's apartment. In other photos, where everybody was fully dressed, Scher appeared embracing the same girls.

"We confirmed that the pornographic pictures were taken next to the consul's pool and on his deck," said Roberto Costa, a chief investigator for the civil police. "We are going to charge him with exploiting minors and prostituting them."

Police believe Scher is hiding out in the Israeli Consulate in Rio.

Foreign Minister David Levy told Israel's Army Radio, "I don't know if he is guilty, if he is innocent. The first thing is we need to bring him home and an investigation has to be conducted."

The Israeli Embassy in Brasilia said it would not comment on the case until it had further details.

Police said a young girl testified that she was filmed and photographed by the teacher, Georges Schteinberg, having sex with Israeli tourists. She also claimed that Scher participated in some of the sessions, without explaining what his role was.

In Schteinberg's home, police said they found 12 videos, Internet messages and 154 pictures, including the shots of naked girls in Scher's apartment.

Rio de Janeiro has the highest rate of child prostitution in Brazil. Workers at hotels and restaurants along world-famous Copacabana beach often offer to provide clients with teenage prostitutes.