Surviving Incest in a Holocaust Family 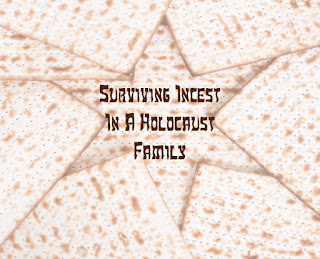 On Friday nights, I light the Sabbath candles and recite the ancient blessing of thanks to God. I am alone in my contemplation of the spirit, eating in a shrouded silence. Through the loneliness of this weekly ritual, I mourn the loss of my family - the loss of my biological connectedness. Like my parents before me, I am a Holocaust survivor, unwittingly exposed to intense human evil. It is an irony of my life that there are some memories, that keep me alive, just as others challenge my desire to keep breathing, moving, feeling, existing.

I remember Nazi uniforms, barbed wire, gas ovens and bloodied carcasses. These horrifying images, scenery of an earlier era, were implanted upon me as a child. My father often forced me to act as the "humiliated,"introducing me to Jewish bondage in a Nazi world, child bondage in a grown-up world. I was raped many times as a child - the penis hard, pressuring, pumping, burning my throat, ripping my vagina, my anus, breaking my heart, my trust in any adult.

I sought out explanations for my world, but none were available. Jewish families were depicted only as the haven, the refuge, the place of safety when one was confronted by antisemitism. I could never figure out where to run when the Jewish father raped his Jewish daughter...

When I finally gathered the courage to leave home at age 17, my father called me the worst name he knew: TRAITOR. The accusation was perfectly consistent with my father’s Holocaust orientation.

After the loss of all but two of the one hundred mem bers of his extended family, anyone who left the fold voluntarily could be considered nothing less.

Intellectually, I understand that my father - by doing to me exactly what had been done to him in the camps - was expressing cathartically his own pain and degradation. He was able to relive his experiences in a situation where he had control. Instead of being the child prostitute for the Gestapo, he was now the master himself....

While my father was truly a victim I still cannot forgive him his violations upon my body. I am filled with rage that I was made to suffer as I did.

There was a time when I assumed that my father was a rapist because of the Holocaust. From my discussions with other children of Holocaust survivors, I learned that many men in situations like my father’s lived through the camps and did not sexually abuse their daughters. I can therefore no longer accept the Holocaust as an excuse for my own victimization.

It is true that after six years of slave labor, my father had an obsessive need to control. Because he is a male adult in a male dom inated, adult oriented society, he was able to exercise his privilege over us, his young female children. Had we lived in a society that empowered women and children, perhaps my father’s deep seated need to control would have fond a different "socially appropriate"outlet.

I often have flashbacks of specific childhood moments. When I’m having sex, I remember scenes from early rapes; I have many nightmares; as I simply go about life, reading, shopping, eating, I frequently have momentary auditory or visual memories. I cringe at the sight of uniforms, at the sound of police sirens. To this day I am always early for meetings, wanting to check things out, make sure that I will not be in danger once a large group of people gather. Analyzing the parallels of incest and Holocaust survivorship, I recognize how my father and I are mirrored reflections of one another. Because my father survived genocide, he feels incredibly guilty. What was it about him that caused him to live, while his relations perished? Similarly, whenever I think of my sisters still living at home, I shudder and feel burdened by an enormous weight. How did I manage to escape the prison that holds them still? Why have I not tried harder to rescue them? My father and I also share a sense that danger is imminent, that it’s not safe to give oneself up fully to the present. Vigilance is ever with us. The very fact that my father lives is a threat to me. Even if I choose never again to attend a family get- together, still, knowing that my father is alive and well means fundamentally that I am never at peace, always at risk. Another similarity between my father’s ex perience and my own is that we both lacked models of resistance. My father did not know, nor did I until recently, that Jews fought back in the ghettos and concentration camps. As an incest survivor, I too knew nothing of valiant girls or women who fought back, who killed their violators. Finally, both Holocaust and incest survi vors cope with "revisionists"- those who deny that our experience was real. Neo- Nazis insist that the Holocaust is a hoax. My mother tells me that my sexual abuse is in my imagination. These two Hells are so horrific that not only oppressors and oppressed, but sometimes observers as well obliterate all memories.

Betrayal is another Holocaust/incest similarity. Holocaust survivors often talk of being betrayed by other Jews. Incest, of course, is frequently a betrayal of the most intimate human relationship, of parent to child. If those responsible for our well being choose to harm us instead, then to whom should we turn for emotional support? If not to our own mothers and fathers, then to whom?

So, you see, because of the traumatic events that both my father and I lived through, our psychological patterning is eerily similar. We forget; we deny; we remember; we relive; and then, we forget again. And, of course, it was easy for me to "forget"on a daily basis, because no one at school, or at synagogue, not even social workers, really wanted to hear about incest. Though I desperately sent out distress signals, I was told, over and over, in ways both convert and overt; ‘This doesn’t happen in Jewish families.

There was no one who would listen to the secrets of my soul. On my own, with no sympathetic other, I could do no better than "forget". By the time I was an adult and had retrieved memories of the perversities I’d endured, I could not bring myself to describe these horrors to anyone. Even in an incest survivor’s group, I deliberately withheld details of my childhood traumas. It was too painful to be the "worst case", to receive the pity of those only slightly less abused than myself.

Recently I joined a group of daughters of Holocaust survivors, and to my surprise I encountered a number of women who were raped by their fathers in contexts very similar to mine. Together we examine and re-examine; we journey towards our deeper selves in great trepidation. Because of the support I feel from these women, I am slowly discovering the power of speaking out, of writing about my experience. I still often feel awash in my own shame when I articulate my pain. I still feel guilt ridden, immersed in the suffering of an earlier era, but even as I write this, I move towards recognizing that the agony that my parents endured does not negate my own agony.
And weekly I light the Sabbath candles and recite the ancient words, continuing to bless whatever that spirit is that keeps me moving feeling, existing, alive.The author of this article was born Chava (Eve) but she changed her name to Lilith in 1975 at the age of 17.
Posted by The Awareness Center, Inc. at 1/01/1993 11:06:00 PM