Shlomo Carlebach's Broadwasy Play -- "Soul Doctor" or should it be called "Soul Murderer"?

According to Rabbi Moshe Feinstein's ruling back in 1959, it is apparent that rabbonim were aware of Rabbi Shlomo Carlebach's predatorial behavior against women and teenage girls. 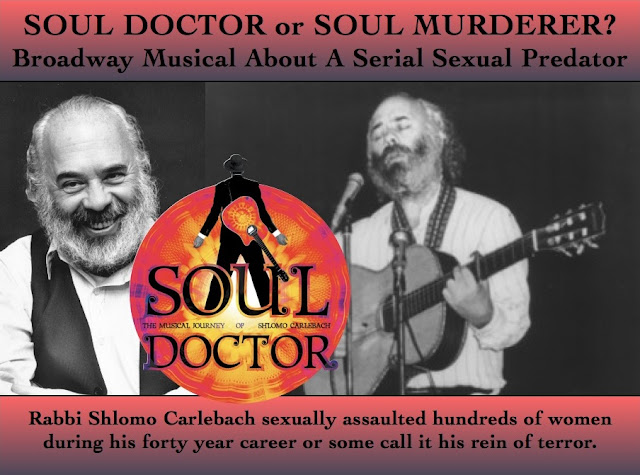 Stop the Music?
Excerpt from: "What to do with Abusive Rabbis: Halachic Considerations"
By Rabbi Mark Dratch
http://jsafe.org/pdfs/What_to_do_with_Abusive_Rabbis.pdf

In 5719 (1959), Rabbi Moshe Feinstein was asked to rule on the permissibility of playing the music of a certain song writer who was rumored to engage in disreputable behavior.

(Teshuvot Iggerot Moshe, Even Ha-Ezer, I, no. 96.) Rabbi Feinstein distinguished between this composer’s early compositions and his later ones. Any music written in his early years when this individual comported himself appropriately remained permissible; at that time he behaved properly and his later activities can not retroactively taint his prior achievements. One of the proofs that R. Feinstein brought is from the case of a Torah scroll that was written by a heretic—Jewish law requires that such a scroll be destroyed so as not to perpetuate his name, reputation or achievements. (Hil. Sefer Torah 6:8) However, the law also asserts that a scroll written while that person was a true believer remains valid, even if he later became an apostate.(Pit’hei Teshuvah, Yoreh De’ah 281, no. 2.) Concerning subsequent musical compositions, R. Feinstein stated that even those songs that this person wrote after his “reputation became objectionable” are permissible because music, unlike Torah scrolls, have no intrinsic holiness. Furthermore, the questionable activities had nothing to do with undermining the fundamentals of Jewish belief but rather with casualness with regard to the intermingling of the sexes that were not in keeping with Orthodox norms. Such a lapse would not render a Torah Scroll he wrote invalid; it would certainly not disqualify his music. R. Feinstein wrote nothing about learning Torah from this individual. However, based on R. Feinstein’s discussion, one might distinguish between the teachings and insights of a heretic before and after his apostacy: the earlier Torah would remain kosher; the latter Torah would be banned.

That was 1959. Since then the allegations about this individual have become more serious and his music has been widely integrated into the prayer services of many congregations. His music, as well as his stories and teachings, have become a meaningful source of religious inspiration to generations of Jews and has perpetuated his legacy. Alleged victims of this man have expressed hurt and disillusionment over the community’s embrace of his music and his personality. What would Rabbi Feinstein have said if he were responding to this question today?

For more information on the case of Rabbi Shlomo Carlebach go to: http://theawarenesscenter.blogspot.com/2012/06/case-of-rabbi-shlomo-carlebach.html

Can you imagine the horror faced by the hundreds of alleged sex abuse survivors of Rabbi Shlomo Carlebach as they learn the musical “Soul Doctor” is making its way to Broadway?

“Soul Doctor” has been around for a few years far off-Broadway but does nothing more then to glorify a known serial sexual predator, who raged a war against women while they were searching to connect with their Jewish identity.

Shlomo Carlebach was known to have been active from back in the early 1960s when he first moved away from the Lubavitch chasidic in which he was from, until his death in 1994. Throughout the years there have also been some mumblings that Carlebach left his Lubavitch roots under pressure, due to his “inability to maintain healthy boundaries with women”  CLICK HERE TO READ MORE