Years ago an organization called VOICES In Action, would give yellow ribbons out to survivors of childhood sexual abuse.  It was an important symbol for us all to wear and a symbol and tradition The Awareness Center is adopt -- for all Jewish survivors of sexual violence.

Survivors of childhood emotional, physical and those who have been sexually victimized as adults and or as children are just as deserving of a yellow ribbon as the men and women of our armed forces who have been held captive as hostage or prisoners of war.  Survivors of sexual violence have been forced to learn how to survive being held captive not by foreigners but mostly by their own family members, teachers, camp counselors, coaches babysitters, rabbis or other trusted authority figures.

December 23, 2009 -- It takes a great deal of motivation, tenacity and motivation to advocate for those who have been sexually victimized.  The Awareness Center sees each individual person who helps others as heroes.

There have been so many different individuals in 2009, who have stepped up to the plate and have gone above and beyond what most people would do to protect themselves and others from sexual predators, that it has been very difficult to choose between them all.  The Awareness Center has several different people in which we are proud to name as Rape Victim Advocates for 2009

The 2009 Rape Victim Advocate of the Year Goes To:

1. The unnamed daughter of Rabbi Israel Weingarten.  Her ability to come forward and work with the FBI and US States Attorney has help allowed law enforcement to get this sexual predator off the streets.

2.  Shannon Orand - The alleged survivor of Rabbi Leib Tropper.  Shannon has done everything in her power to stop the madness going on in her own personal life as she has been going through the conversion process.  It's a harsh reality to know that even those who are trying to convert would be put into a position in which they are manipulated into having "sexual relationships" with those who hold all the power over them to convert to our faith.  What happened to Shannon can and does occur to those converting to all faiths, yet unfortunately, her alleged offender(s) were rabbis.

Instead of throwing in the bag and walking away from what she felt was the true faith, Shannon did everything in her power to expose what was happening to her and shared evidence with a few rabbis.  Unfortunately, her evidence was not kept confidential and was shared with the world.

Rabbi Yosef Blau stated: “There is a campaign to besmirch Shannon Orland. My information from a most reliable source is that she is sincere and was working for Rabbi Tropper though her geirus had not been completed. She was misled about the public distribution of the tapes. Unfortunately, the pattern of blaming women who have been manipulated by a rabbi, who was an authority figure, is being repeated in this case. Attacking her won’t save Tropper but it can have a devastating effect on her life.”

The Awareness Center is saddened by the lack of professionalism that was shown by those who did not protect her identity -- and supports Shannon in anyway we can.  Shannon's efforts should be seen as heroic and for these reasons we are naming her as one of the Rape Victim Advocates of the Year 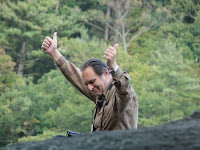 3. Murray Levin, is a survivor of clergy sexual abuse.  It took Murray 54 years to come forward and share his story of being sexually abused at the age of 12 by Rabbi Ephraim Shapiro.  The Awareness Center believes that Murray is a war hero -- and like with other warriors he deserves to be honored and shown a great deal of respect.  Just as many individuals stand up when their rabbi enters a room, the same sort of respect and honor should be shown to Murray Levin.  We say this because over the last few years he has been doing everything in his power to try to speak out and change the laws in Maryland to make the state a safer place for children, including his own children and grandchildren. He has also been a dedicated volunteer for our organization.


Below is the testimony Murray provided earlier this year at a legislative hearing in Annapolis, MD.

Murray is most deserving of this recognition. His actions will safe gaurd millions of children for centuries to come. Yet, he will be little known for taking on such monumental entities of unquestioned trust.

I am earnest when I say that rabbis should stand when Murray Levin walks into a room. He had the courage to take on the predators when they didn't.