© (2009) Vicki Polin, MA, LCPC
Back in June (2009) I was invited to speak on a panel at the National NOW conference  (National Organization for Women) in Indianapolis, IN.

My first reaction was denial, yet then I went through the cases we had on The Awareness Center's site and I started seeing the same pattern. As much as we are in denial regarding our children being victimized, we are in much greater denial about the fact that unsuspecting adults (both men and women) are also victimized -- not just by clergy

We all think as we get older that these sorts of crimes would not happen to us, yet they can and do.
A few weeks after I spoke at the NOW conference I was assaulted by Dr. Rabbi Jack N. Porter, who was my rabbi's brother -- a man who also has semicha.

I have to admit that I am still in shock over what happened, and especially the fact that it took me 33 days to make a police report. 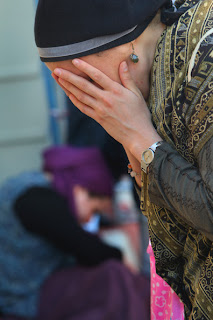 Can you imagine how difficult it would be for most women to come forward to make a report like I did, especially a women in the frum world? or even a frum man?

The offender in my case was found guilty of 2nd degree assault, 4th degree sexual assault. His sentence was basically a slap on the hand He received Probation Before Judgement (PBJ).

Even though the perpetrator in my case only received a slap on the hand, I am still very happy I went through and filed charges. I needed to have my day in court. I needed to hear the judge say he was guilty.

I'm sharing my story with you because I'm sure that there are other women out there who want to speak up, yet are afraid to do so. I'll admit it has not been easy. I am being shunned by many people in the Baltimore community -- because I filed the charges against my rabbis brother, and refused to drop the case.

I was even more surprised of things people have said to me on the streets after the perpetrator in my case was found guilty.

The truth of the matter is that the individuals who shun me or have said hateful words are a major part of the problem. They are truly misguided individuals. This is something that can be stopped when our rabbis will start speaking out against this sort of behavior instead of encouraging it.

I can and will live my life without those who have turned their backs on me. I can get past the sadness and loneliness. I just need time to mourn my losses and heal.

I think it's important for me to say that I will use this experience to help others. For me, it is vitally important to take a bad situation and transform it into something good. My hope is that our rabbis will begin to learn that it is more important to help those who have been victimized heal, then it is to protect the perpetrators.

I think it's also vitally important to say that Survivors need to be able to heal so that they can earn parnasa for themselves and also their families.